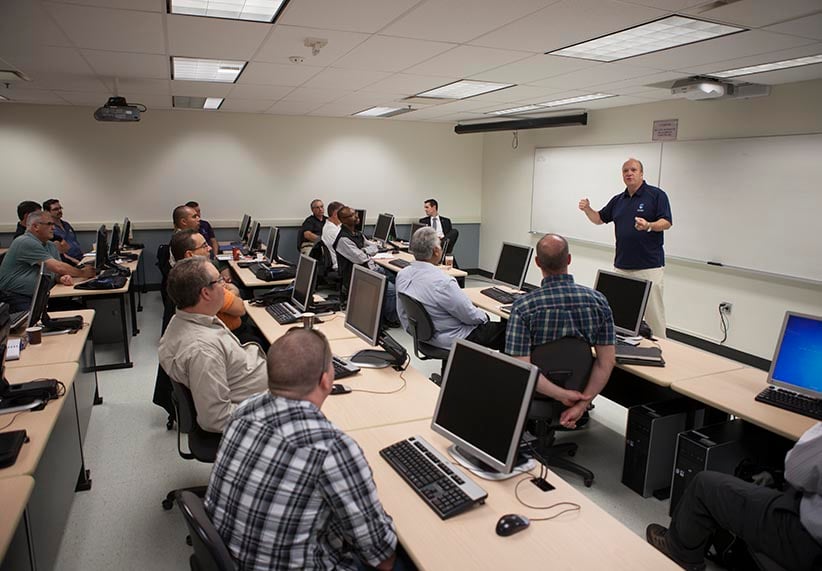 Colin Ruthven has been the chair of the heavy-equipment-technician program at the Northern Alberta Institute of Technology (NAIT) for seven years—and there have been plenty of times when a business background would have come in handy. He’s had to wrestle with budgets and come up with ways to market and promote the program. His dean suggested that Ruthven, who started his career as a truck-mounted crane serviceman, pick up some business courses and work toward a bachelor of business administration (B.B.A). “But I was pretty busy in the new role,” he says, “and dealing with a pretty steep learning curve.” A degree seemed out of reach—until NAIT came up with a solution, and a shortcut.

The school’s Trades to Degree pathway, which began in 2012, gives professional tradespeople like Ruthven the opportunity to parachute into the last two years of a four-year B.B.A., using their work experience as advanced credit. “I jumped on it,” says Ruthven. “I’m now in the third year of a business degree and will graduate in January 2017.”

Currently, there are 42 adult students going through Trades to Degree, including a number of gas fitters and electricians, as well as a boilermaker and a millwright. According to Keven McGhan, an associate chair at NAIT’s business school, half of them have entrepreneurial ambition and the other half are looking to move up in their organizations. “Typically, tradespeople can get to a certain level,” says McGhan, “and then they hit a ceiling where their skill set is insufficient to move forward. At that point, you could look at getting a business degree or perhaps an executive M.B.A. But our pathway is relatively more efficient, because we recognize the skill set they have developed up to that point. At other schools, they’d have to start at the bottom.”

Besides opening up more senior-level doors for tradespeople, the program hopes to help fill a gap that is beginning to widen in the skilled-labour market as Baby Boomers retire. “There are two parts to that void,” says Ruthven: “not only the tradespeople on the floor, in the shop, tools in hand, but it’s their supervisors, the lead hands, foremen, service managers. They’re looking at retiring, too.”

At 51, Ruthven is taking courses with other manager-level tradespeople, as well as business students three decades his junior. “For someone at my age, it’s easier to understand some of the concepts being taught, because I’ve got the life experience I can relate it to,” he says. But he is constantly impressed by his younger classmates. “You always hear about how Millennials expect everything on a silver platter and they don’t have the same work ethic and dedication as older generations. But I’ve seen these students working full time, working two jobs and coming to school at night. Work ethic in the younger generation? They’ve got it in spades.”

Now that NAIT has begun to integrate trades and higher education, McGhan is often asked by young trade-apprentice students—who are working toward their journeyman status and Red Seal (interprovincial) certification—how they can add a business credential to their training. While they wouldn’t be eligible for the Trades to Degree program so early in their careers, NAIT offers a business for journeyman diploma. Those who have their Red Seals and a year of work experience can earn that diploma in one year, then they, too, can advance to the third year of NAIT’s bachelor of business administration program. “The message is getting out,” says Ruthven, “that trades is not a terminal career.”

There has been one Trades to Degree graduate so far, and more will follow this year. Because the first cohort are mostly NAIT instructors, the school is seeing the benefits up close. After taking 17 courses with only six more to go, Ruthven already considers himself a better program chair. Thanks to the accounting courses, he approaches his budget differently, while the marketing courses have inspired him to promote the heavy equipment program on social media. The human resources courses on conflict resolution have been particularly helpful. “I’m kicking myself in the butt,” he says, “because it’s something I should have done years ago, with fewer grey hairs, more stamina and more brain cells.”