Students get a feel for a work camp by living in refurbished ‘cars’ that mimic real job sites. 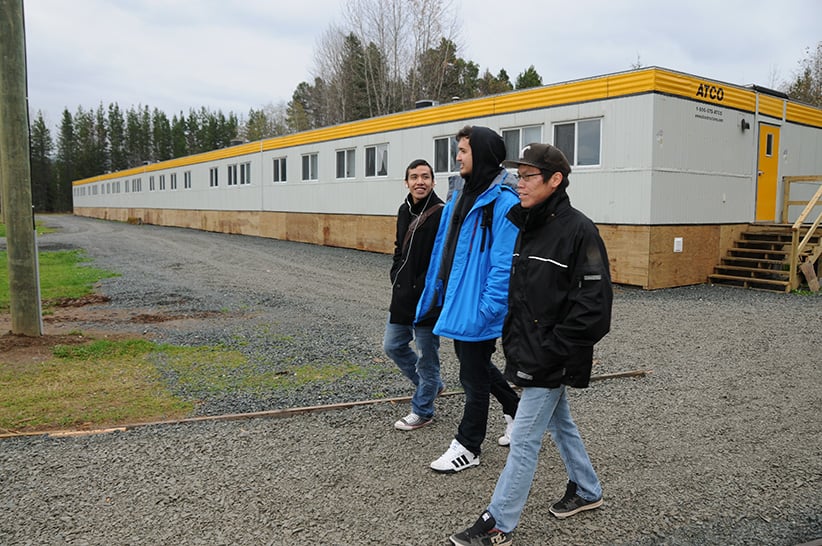 Working in the mining or natural gas industries in northwestern British Columbia often means weeks of living in remote areas, employment for which Northwest Community College is preparing students with work-camp residences at its campus in Terrace, B.C.

Life in a work camp is “completely unique, living in the middle of nowhere essentially,” says Kerry Clarke, director of facilities and ancillary services. Employees often spend several weeks at a time far from family and urban conveniences. To mimic this lifestyle, Northwest brought in “cars” on huge trailers that contain 100-sq.-foot rooms and recreated camp conditions: putting them on a far corner of campus to lend a sense of remoteness, lining the walkways with gravel rather than pavement or neatly trimmed lawns, and offering students cafeteria meals similar to what they’ll find in the camps—buffet-style pans of lasagna and other dishes offered from 5 p.m. to 6 p.m.—prepared by Northwest’s culinary students. At the time of writing, 40 of the 48 spaces—which cost $429 a month, the same as the regular residences on the Terrace campus—were occupied.

“They have caused quite a stir, provincially, in a good way,” says Clarke. Other colleges are interested in copying the idea. The “trades housing camp,” as it has been christened, was set up in response to feedback from those in the industry who noted that though graduates had the technical knowledge needed to do the job, they were not prepared for camp life. The camp—which includes a wash car with nine bathrooms—gives students a taste of camp life, but also teaches them camp etiquette, like keeping noise down after hours.

In addition to the work camp, the school also launched a classroom on wheels, which can be outfitted to teach students everything from welding to working with liquefied natural gas to hairdressing, says Justin Kohlman, vice-president of education, student development and international. The Mobile Training Unit is expected to reach roughly 100 students in remote communities this year.

First Nations students make up roughly 40 per cent of the college’s 2,000 students, so the college is focused on creating courses and facilities to support them. “The diversity and distance up here is hard to get your mind wrapped around,” says Kohlman. “The distance between Northwest’s eastern campus and western campus is the same distance as from Charlottetown to Toronto.” Many students aren’t as mobile as those in urban centres, and lack driver’s licences or vehicles. “We have to find creative solutions,” he says. “We need to figure out different ways of doing outreach, and whatever that looks like, we’re open to that.”