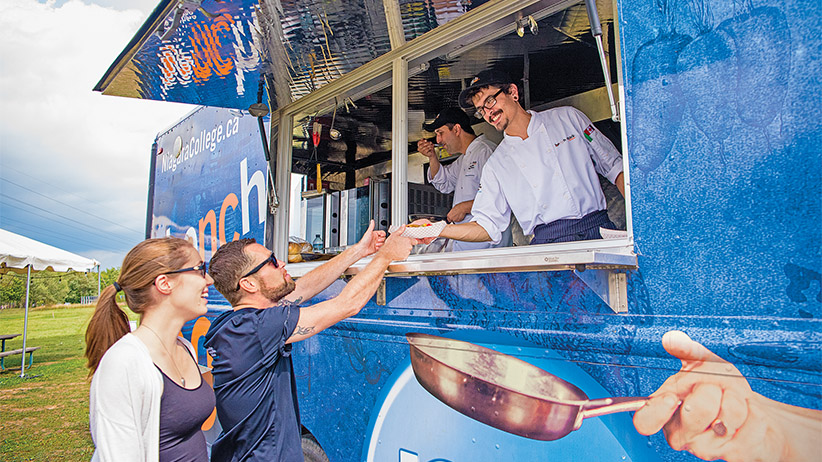 The school’s food truck, Bench on the Go, gives students a shot at learning how to cook and serve in a teeny, 120-sq.-foot kitchen (Luke Gillett/Niagara College)

Food trucks had to circle the block a couple of times, but they’ve finally found their parking space on the culinary map. As a business, it’s a tricky game, requiring skills that can’t be learned in a classroom or even a restaurant kitchen. “You don’t have a high-end clientele; you’re not charging $30 a plate,” says Craig Youdale, dean of Niagara College’s Canadian Food and Wine Institute in Niagara-on-the-Lake, Ont. “Your only way to survive is to pump a lot of volume out.”

Operators have to get up to speed—producing at peak quality and efficiency—instantly. That churro cone line needs to move quickly, and the churros have to be crispy, or the crowds won’t come back. “There’s not a lot of forgiveness in the business,” says Youdale, who has introduced a food truck into his school’s two-year culinary management program. “You have to come out with a system to put out as much food as possible, the best quality you can, with the least amount of people. You can’t have a small army in there.”

As part of the program, students study the operations, regulations, licensing and business model of food trucks. At first, the school had food-truck operators make the 120-km drive from Toronto to do presentations; in 2013, they had their own vehicle built. It’s run by students and instructors as Bench on the Go, and space is limited, so only about 70 of the school’s 400 students each year are either paid to work in it or volunteer to help out.

Inside the vehicle’s cramped, 120-sq.-foot kitchen, stuffed with ovens, deep fryers, burners and sinks, students produce a changing menu of cubano sandwiches, turkey meatballs and quinoa pakora fritters. Sometimes the truck goes to festivals or catered events at nearby wineries, or it parks on school grounds and serves students and visitors.

Youdale estimates the cost of starting up a food-truck business at $100,000 to $150,000, about half of the investment required for a 30-seat restaurant. Many municipal governments have restrictive bylaws, making it a difficult business to sustain, but it has emerged as a new and important facet of the food-service industry. “It’s pretty tough to be financially viable if the truck is your only business,” says Youdale, who has integrated food-truck business into the classroom curriculum for all cooking students rather than make it a stand-alone course. “The ones that are more successful either have multiple trucks or are part of a bigger system—a truck as an add-on, a piece of the puzzle.”