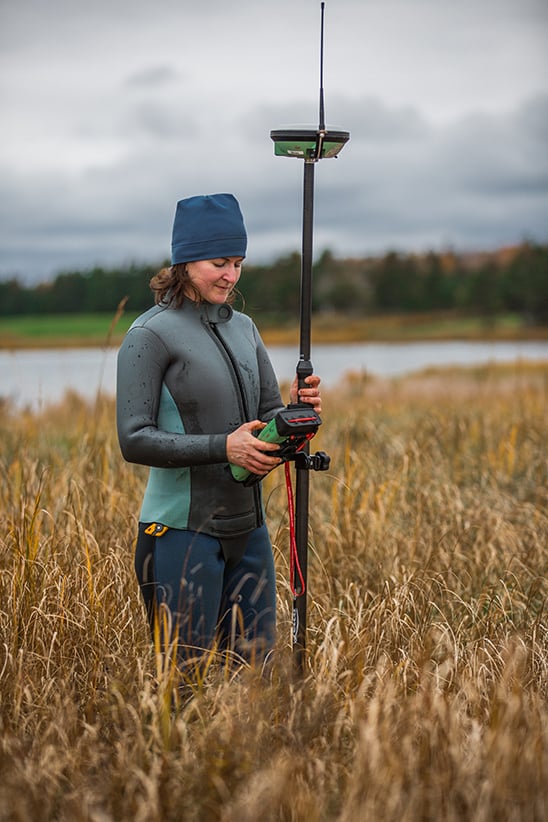 If you know the shape and size of seabeds, that information can be used in everything from the aquaculture industry to oil-spill response agencies. But it takes a special tool to peer beneath the waves and map the bottom of the ocean. And only one post-secondary institution in Canada has it.

The million-dollar-plus topographic-bathymetric lidar (light detection and ranging) sensor at the Nova Scotia Community College campus in Middleton, N.S., looks a little like a old-school TV mounted screen-side down in a Piper Navajo survey plane. The 80-kg unit contains a near-infrared laser, a green laser and two cameras, while another unit houses a processor that controls when the lasers fire, and a hard drive to store data. The lasers are sent down through an opening in the plane’s floor, and the unit measures how long they take to bounce back. The data is used to create a topographical map of the so-called white ribbon, a previously unmapped area between the shore and deeper water that is beyond the reach of land- and boat-based mapping techniques.

One of only two schools in North America with the ocean-mapping technology (the other is in Texas), the NSCC’s Applied Geomatics Research Group bought it two years ago with an $800,000 grant from the federal government’s Canada Foundation for Innovation and another $800,000 grant from the Nova Scotia Research Innovation trust, plus in-kind contributions from five companies.

Since it started flying missions in September 2014, it has already been used, among other things, to survey waters where one partner, Acadian Seaplants, harvests seaweed, which is used in human and animal food, pharmaceuticals and cosmetics.

“The information we are collecting gives great baseline information as to how deep these bays are,” explains research scientist Tim Webster, head of the Applied Geomatics Research Group. “Then we can use that to essentially simulate how the water moves in the bays through something called a hydrodynamic model.”

Nova Scotia has a small aquaculture industry compared to P.E.I. and New Brunswick, and the data collected and processed from the Northumberland Strait, for example, is useful in determining whether a bay has stagnant water or is well flushed, which is better for shellfish like mussels and oysters.

The topo-bathymetric information can help predict how the sea will surge on land during major storms, which is useful for municipalities, ports and land owners. And those hydrodynamic models can also help figure out how an oil spill will move on top of water.

The mapping and interpretation of the data is led by Webster, but students in the college’s two-year geographic information systems (GIS) program or its one-year, post-graduate geographic sciences advanced diploma program (offered through its Lawrencetown campus) also help out.

Jesse Siegel, 25, took the advanced diploma last year after he couldn’t find a job with his university degree in environmental sciences. He went to NSCC after hearing about its “great reputation” for training students in emerging technologies used in geographic information systems—a field where job prospects are growing. This past summer, as a research assistant with Webster’s group, Siegel spent hours aboard a small Zodiac doing “ground truthing,” where he used a GPS to validate information gathered by the lidar. “It was fascinating work,” says the Shelburne, N.S. native, adding that even for a university grad with a double major, the NSCC graduate program “was a lot of new information for me.”

The sensor’s data is also contributing to the federal government’s World Class Tanker Safety initiative, which has slated $450,000 for topo-bathymetric surveys in Nova Scotia and B.C. in at-risk areas, says Scott Coffen-Smout, a Dartmouth-based oceans management biologist with the federal Department of Fisheries and Oceans. “A lot of the info we have right now is quite coarse,” says Coffen-Smout. Topo-bathymetric maps made from lidar data collected near Isle Madame in 2014, on the province’s east coast, will help them prepare. It’s an area where ship traffic is heavy—and where, in 1970, the oil tanker Arrow ran aground on a rock with more than 100,000 barrels on board. The spill contaminated 300 km of coastline, and just last summer, it started leaking again. The topo-bathymetric lidar maps are, as Coffen-Smout puts it, “another tool in the tool box” that will help cleanup crews in the future.