‘You don’t have to walk through the door,’ says president Ken Tourand. ‘We’ll come get you.’ 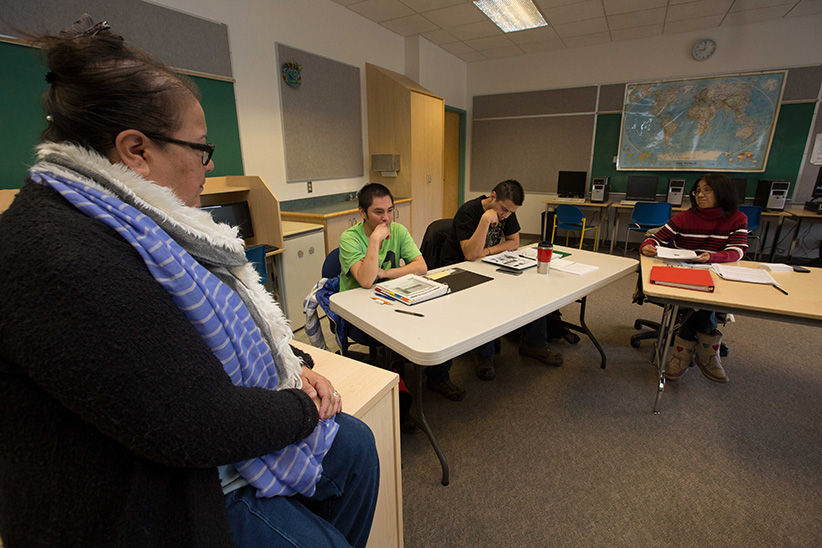 Low stress: Assessments are not timed and elders are present

Before she heard about the Nicola Valley Institute of Technology, Teneshia Yahey wondered if graduating from culinary school was the furthest she’d be able to go with her education. The 25-year-old always loved to cook, so she had taken the professional cook’s program at Northern Lights College’s Fort St. John campus in 2015. But Yahey, who didn’t have her Grade 12, wanted options. Because her stepfather owns his own welding company, she wanted to try that, too. So when the Nicola Valley Institute of Technology showed up in Blueberry River First Nation, about 80 km north of Fort St. John, she jumped at the chance to work toward her welding certiﬁcate in her home community.

Yahey felt very comfortable talking to the NVIT people when they assessed her literacy and math skills in October 2016, saying the conversations refreshed her memory about what she did know. She’ll spend 10 weeks in a college-readiness course, delivered right on the reserve, with the trades program arriving in January 2017.

The Nicola Valley Institute of Technology in Merritt, B.C., prides itself on breaking down barriers to education by doing things a little differently, namely looking at potential students as more than just grades on a page. Instead of relying solely on school transcripts, NVIT is taking the anxiety out of learning assessments by adding a face-to-face conversation to the multiple-choice tests. Called community-based assessments (CBAs), they are proving to be a positive way to reach out to potential learners, sparking an interest in post-secondary education where there was little or none before.

“You don’t have to walk through the door,” says NVIT president Ken Tourand. “We’ll come get you.”

NVIT was founded in 1983 by five B.C. bands for the express purpose of steeping students in Aboriginal culture, tradition and knowledge. Because it offers free high school upgrading on its campus, not to mention college and university courses, some students can spend as many as six years there before transferring to a degree-granting school, if they go that route. “You don’t need a grade point average here,” says Tourand. “General educational development (GED) is tuition-free; the B.C. government pays. We go into the communities to ensure the greatest chance of success.” He says the school’s motto is: “Those who can least afford it are the ones who need it the most.”

The high school graduation rate for Aboriginal students in the province is 63 per cent, according to the Ministry of Education’s latest figures from the 2014-15 school year, compared with 86 per cent for non-Aboriginals. But even those with Grade 12 credits may not have the learning outcomes to match the piece of paper, and that knowledge gap puts them at a disadvantage if they go to college.

The assessments involve going to remote and rural communities and interviewing people as a way of appraising what they have learned in school already and what they need to learn to get a high school equivalency diploma and move on to college or university classes. And if they end up somewhere other than NVIT, which draws students from 60 per cent of the province’s 203 bands, that’s okay, too, says Kylie Thomas, the school’s registrar and director of students.

The community-based assessments also involve an outline of educational pathways open to students, to show them how to pursue their educational goals. The school will deliver some courses directly in a community if commuting to the institute’s campus in Merritt is too challenging. Blueberry River, for example, is 1,000 km north of NVIT’s main campus in Merritt. NVIT actively promotes the assessments among Aboriginal communities and, if anyone expresses interest, covers the cost going forward.

“There is a lot of potential within the CBA,” says Thomas, adding how the most rewarding part for her is flying in to a remote community and seeing “even one participant light up because of the whole concept and idea of education.”

Part of the problem for NVIT is that some learners, though they may have high school credits, don’t have the knowledge to back up their transcripts. The assessment “is actually a huge opportunity,” says Patsy Greyeyes, Blueberry River’s education manager. Of those who were assessed in October 2016, only one of the 11 tested at a Grade 12 level, a problem she says is rooted in local policy. “They are literally being pushed along regardless of what they know.”

Furthermore, Greyeyes says many people on the reserve have little to no income, so it is virtually impossible for them to commute to classes at the nearest campus of Northern Lights College or the University of Northern British Columbia in Fort St. John, let alone support themselves as full-time students.

But Greyeyes, a high school dropout herself, says it is never too late. The former social worker could barely read when she arrived at UNBC in Fort St. John when she was 23. “It took me a while, but I did eventually earn a degree. I know that it’s possible.”

Since some participants never finished high school, the assessments take care to remove the fear of failing. First, an elder is always present to support the student. And since many participants have been out of school for a while, the first day is spent reaffirming what they already know as a way of building confidence. Finally, none of the testing is timed. The process is designed to be as stress-free as possible.

After 10 years as registrar, Thomas has seen first-hand how big a role that anxiety can play in derailing an Aboriginal student on the road to higher education, especially for mature learners. Alongside the self-doubt, Thomas points to a generational legacy of “distrust and fear of education,” a hallmark of the residential-school experience that endures today.

Shania Apsassin also took part in the CBA at Blueberry River reserve in October. Like most of the 11 participants, Apsassin stopped short of graduating high school. The 20-year-old says she always felt at home throughout the assessment. She describes it as a positive experience, a sentiment she says was shared by the others, over half of whom were, like her, mature students. She was glad for the opportunity to discuss her options, even if she is not sure of her future path.