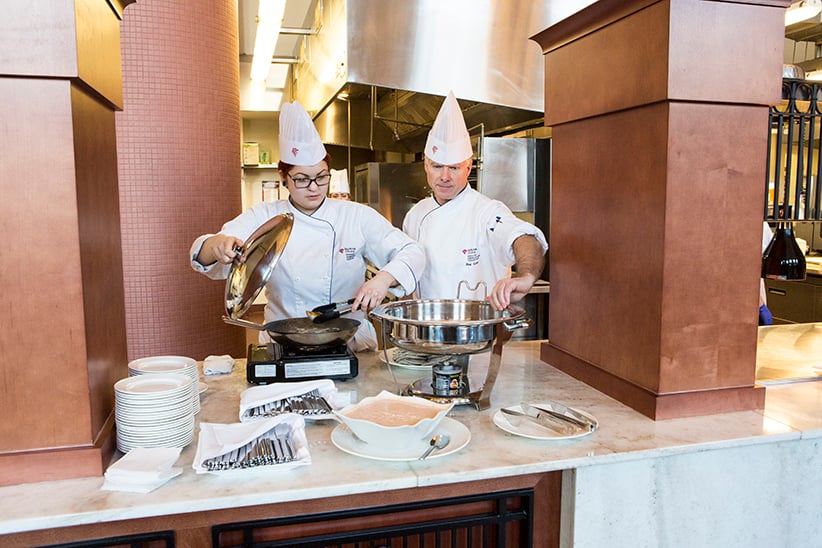 It started with Deer + Almond in 2012. The small-plate restaurant popped up on Princess Street in Winnipeg’s Exchange District, offering a new option to downtown office workers and hip university students. Then, King and Bannatyne’s sandwiches drew lunchtime crowds. Next, Bronuts and Chosabi opened side by side in 2015, each tempting diners with their own versions of doughnuts and sushi, respectively. The Albert Street Cocktail Company, Miss Browns, and Clementine all opened in the same eight-block radius, transforming the Exchange into the culinary hub of Winnipeg in under five years.

And in the middle of it all sits Jane’s. One of the most innovative eateries in the city, it changes its menu every three weeks, working almost exclusively with local ingredients. Not just a fine-dining establishment, Jane’s is also a training ground for the city’s future top chefs.

Staffed entirely by students from Red River College’s culinary arts program, the restaurant is open for lunch and dinner, with tourism and hospitality students hosting and acting as servers. Students work there for two 10-week terms, and are supervised by instructors like Janet Townsend.

“[Guests] like to see students learning,” Townsend says. “They like to watch the culinary students cook in the kitchen—it’s an open-kitchen concept, so you can see everything from a pot banging to a chef directing orders.”

For the fall menus, students prepared dishes like bison sausage, arugula salad and squash tortellini. Fresh and local are concepts the students become intimately familiar with in the kitchen. “They’re using the root vegetables, the pumpkin and the squash,” Townsend explains. “They’re trying to source things locally. So they’re using a lot of the purveyors that are small, that work with us to bring the product from the farm to the table.”

Jane’s sources nearly every ingredient, from its pork to its pickerel, from Manitoba farmers. It even has beehives on the fourth-floor patio of the Paterson Global Foods Institute—which houses Jane’s—so it can harvest fresh honey. The commitment to seasonal ingredients makes an impact on students like Bradyn Palmer, who is set to graduate in December 2016. “I’ve always worked with mushrooms, but I’ve been very narrow-minded. I’ve only used the basics, like you find in Superstore. And since then, there’s a crazy world of mushrooms and fungi that I hadn’t even heard of before.”

The 23-year-old applied to the program in 2012 and was wait-listed for two years, which isn’t uncommon. Red River’s program is popular with students, but there’s only enough lab space for 40 students per semester. There’s also a baking program, which only admits 20. When he finally made it to the school, Palmer found a new respect for cooking. “My whole cooking style has had a complete overhaul since I started school,” Palmer says. “I’ve always liked the flavours of Asian cuisine and how complex it can be, and how you can do anything in that window. But since I started school, I took what little I knew, which was basically ‘soy sauce, ginger and garlic works well together’ and just blew it up.”

In his menu-planning course, Palmer put together fall recipes with an eye to the flavours and ingredients available to him. “[Classmates] would want to use asparagus in December. And that’s not coming from Manitoba, that’s coming straight from Mexico,” Palmer says.

The students at Jane’s learn in the classroom before heading out to apprentice at local restaurants. Mandel Hitzer, chef and owner of Deer + Almond, says the students come prepared with great technical skills, and he aims to teach them to think on their feet and handle the complications of a restaurant job. “If they spend three months with me, we’ll take them from a student to being able to work in any environment,” Hitzer says. “Like any job, the ones [who] prevail are the ones [who] put in the time to really master the craft.”

Palmer has his eye on a job at one of the many Exchange District restaurants, but first he has to make it through one last semester—10 weeks of a gruelling dinner service—at Jane’s.