From Vitamin-D enriched cheese to diabetic-friendly ethnic food, traditional favourites are getting a serious makeover. 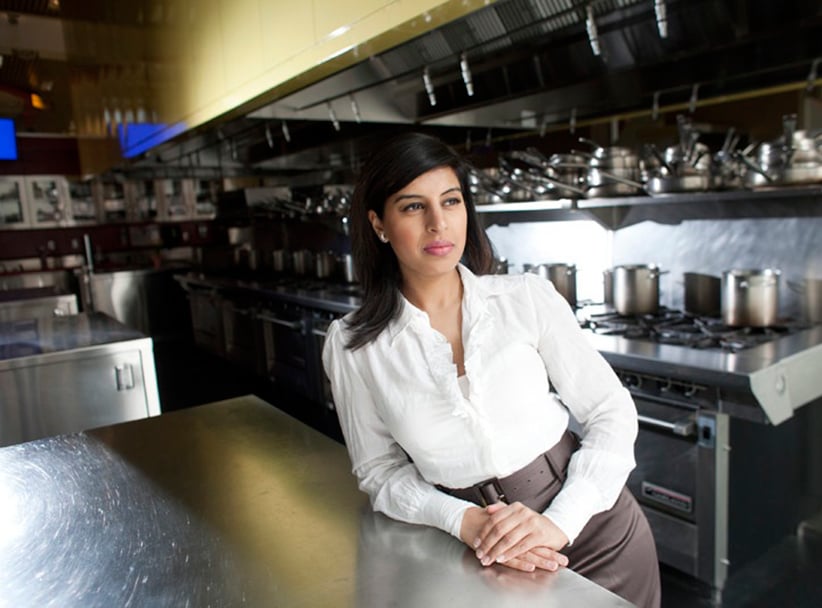 Sobia Khan, Registered Dietitian and Professor of Food and Nutrition at George Brown College, poses for a photo in one of their kitchen classrooms in Toronto, Ont. (Brett Gundlock)

Students learning how to frost a cake or make chicken cordon bleu for 500 people usually comes to mind when one thinks about culinary advancement at colleges. But restaurants are just a small part of food, as it impacts practically every aspect of daily life, from the environment and health care to economics and cultural identity. Food is the universal language (who doesn’t have an opinion on what makes a good pizza or curry bowl?), and researchers are using that as a way to improve the well-being of communities—or just coming up with a tastier dish—be it finding alternative protein sources for the rising global population, growing greens year-round in colder climates, or getting Canadians to meet their daily dose of vitamin D.

In Canada’s most diverse city, Sobia Khan, professor of food and nutrition and a registered dietitian at George Brown College, spent the last few years coming up with diabetic-friendly versions of traditional dishes from dozens of Toronto’s ethnic enclaves. “I noticed that people who are of a higher risk of diabetes are mostly in ethnic communities like South Asian, West Indian, and Chinese,” she says. “There’s a lot of research in Canada that suggests that, for example, people coming in from rural areas from another country were likely to be more physically active, cooking their own food, and have more local sourcing of food.” But once they move to a larger city or have a more Westernized lifestyle, cheap fast food becomes readily available. “These groups are already genetically more susceptible to diabetes,” she says, “so the idea of this project is to give healthy versions of their food and prevent the disease’s onset.”

Sensing that those in the affected communities aren’t ready to give up their chutneys and jerk chicken in favour of oatmeal, Khan sent her students to collect traditional recipes and bring them back to the school’s test kitchens to create versions with reduced sodium and fat, and shrinking the portions of rice and noodles.

“Most of the people were really enthusiastic about the project once we demonstrated that the recipes still taste good and are close to the traditional recipes,” she says, adding that her own mom contributed recipes for Indian and Pakistani dishes. “We shared the recipes so the people could try them at home and give us feedback.”

Working with the Canadian Diabetes Association, a few local chefs for pointers on Latin and Indian cooking, and community health centres across the Greater Toronto Area, Khan and her team covered the Chinese, Latin, West Indian, and South Asian communities. The research led to a cookbook released in October 2014 called 150 Best Indian, Asian, Caribbean and More Diabetes Recipes.

(The recipes are also on the Canadian Diabetes Association and Eat Right Ontario websites for free.)

“I learned a lot from the culinary students and the people we worked with—especially the moms,” Khan says. 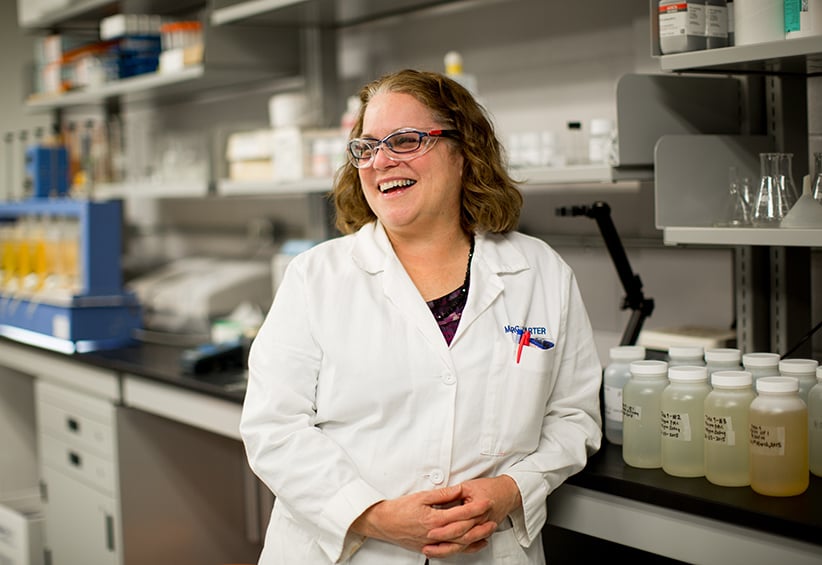 Margaret Carter, a professor at Lambton College’s school of technology, engineering, and apprenticeship, is leading a team trying to come up with a better way of processing protein powder from beans. “There are two motives: One is for a gluten-free alternative for baked products; the other is increasing protein in diets in North America, as well as other areas of the world where protein sources are limited,” she says.

Making bean protein requires solvents like acids and alkali as part of the manufacturing process. Carter wants to find a way to make protein flour without solvents, cutting down on waste and maximizing the protein content.

Right now Carter, her two students, and research partner, Waterloo-based R&D company Advanced CERT Canada, are looking at the best ratio of protein, carbohydrates, and fibre in different bean flours that will best mimic regular flour. The next step is to do a pilot production run before ramping up into full-scale production.

While bean flour might not get the public salivating, how about pizza cheese? As part of an ongoing project between the University of Toronto, Ryerson University, Mount Sinai Hospital, and George Brown College, Winnie Chiu, director of George Brown’s research facility Food Innovation and Research Studio, was enlisted to feed 102 volunteers pizzas over a 10-week period in 2012 to see if it was possible to get vitamin D-deficient Canadians to get their daily recommended dosage through mozzarella.

“Vitamin D deficiency constitutes a large number of public health problems like osteoporosis, increased risks of cancer, multiple sclerosis, cardiovascular disease, and rheumatoid arthritis,” she says. “The average daily intake in the Canadian diet provides 200 IU a day and Health Canada wanted to put a recommendation to increase the intake to 600 to 800 IU a day.”

While other dairy products like milk and margarine are already enriched with vitamin D, not everyone consumes it. Pizza, however, is as popular as ever (mozzarella is the bestselling cheese in the country). The test was successful in raising the volunteers’ vitamin D levels without compromising the cheese’s taste and texture. More research needed to be done from a nutrition standpoint, and the cheese manufacturer has to figure out how to make the enriched cheese on a commercial scale.

“This is a good example of complementary research between universities, colleges, hospitals, and industry,” says Chiu. “The universities don’t have the capabilities to do the creative culinary side so that’s where we came in. We have an Italian cooking program and we had students help make the six-inch pizzas while Mount Sinai did the bloodwork and Ryerson worked with Agropur, the dairy company, to provide the cheese with the added vitamin D. Experts from Uof T came to speak to our culinary students who are interested in nutrition, so there’s a lot of knowledge sharing.”

Durham College’s Centre For Food—a multimillion-dollar research building with its own restaurant, farm fields, and greenhouses—got students studying electronics, horticulture, food and farm to look into extending Ontario’s prime growing season from early spring to the start of winter, through cold-frame farming. Think of a cold frame as a smaller version of a greenhouse, a deep, four-by-five-foot wooden box filled with soil and fitted with a transparent plastic or glass lid that traps sunlight, keeping the soil warm enough to grow food. “Cold-frame technology has been used for hundreds of years,” says Shane Jones, who teaches at the college’s food and farming and horticulture technician programs.

“Here, we’re looking at the variables like access to light and if the boxes are in a windy area. We’re also looking at taking the excess heat that’s trapped in the frame, sending it deeper in the soil and then back up to the surface to keep the plants warm overnight.”

Jones, along with co-researcher Greg Moran at the school of skilled trades, apprenticeship, and renewable technology, are about to put the kale and swiss chard planted in their cold frames to the test as the crops enter their first winter.

Durham is also working with Niagara-based Vineland Resesarch and Innovation Centre to grow okra during Ontario’s colder months to meet growing demand for the seed pod popular in African and South Asian cooking.

“Our focus is applying this technology to homeowners and communities that have a hard time getting fresh vegetables,” Jones says. “With cold framing you can feed families in your own space at a low cost with zero energy.” The project is still in its infancy as winter will be the first time the plants in the cold frames will be exposed to freezing temperatures.

“Greg and I are the leaders on this research,” says Jones, “but it’s really the students who are directly involved with the upkeep and the monitoring. The carpentry program got involved in building our frames, the electronics department is monitoring the data. It’s important to give students something real to work on beyond the classroom.”

Having access to many departments is why businesses are turning to college research departments for help. When Niagara College was approached to make a better lager for Mothers Against Drunk Driving’s line of non-alcoholic beer, the college’s research and innovation department spent a year and a half developing the beverage via its onsite teaching brewery, the first of its kind in Canada. “It was a great project because our brewmaster and students haven’t worked with non-alcoholic beer before, so it was a new set of challenges for us,” says Marc Nantel, associate vice-president of research and innovation.

The brewmaster, a food scientist, and students came up with a few recipes that matched criteria for a better booze-free lager: taste, colour and carbonation, as defined by a panel of beer experts. The samples were then put to the test with existing non-alcoholic beers, as well as a few alcoholic beers, for a blind taste test with a non-expert panel. From there, the research team continued to refine the product, do more taste tests—including one at a food trade show where hundreds of samples were given out. “We also had business students figure out price points and what the current market for non-alcoholic beer looks like in North America, and we even got a graduate from the web design program to design the can,” says Nantel. MADD Virgin Lager hit drug and grocery shelves last year across the United States and Canada, winning a few awards from the Retail Council of Canada and the U.S. Open Beer Championships along the way.