College students from around the world compete for medals, which shine on the resumes of these Canadian winners 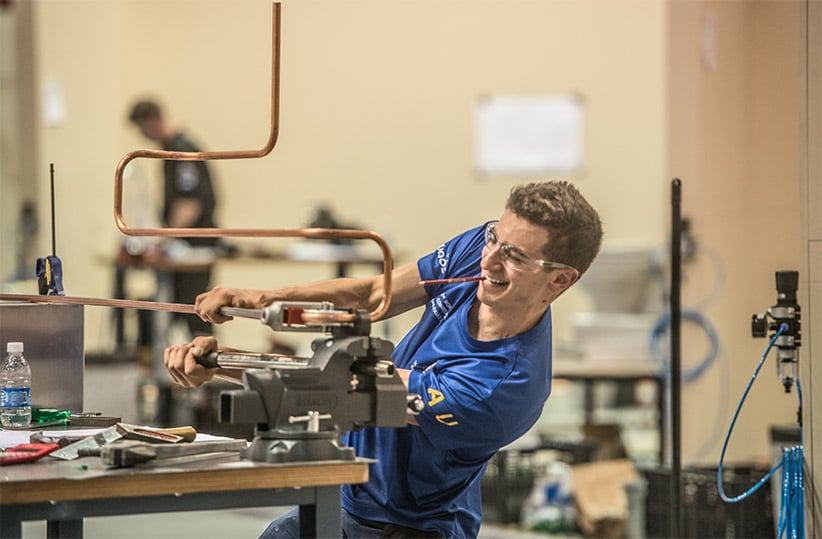 An Australian competitor participates in the Plumbing and Heating competition at the 2015 WorldSkills Competiton in Sao Paolo. (WorldSkills International)

If you don’t associate skilled trades with intense competition, you have probably never heard of Skills Canada.

The not-for-profit organization has been promoting technological education and engagement in the trades for more than 10 years, hand-in-glove with keen teachers at the secondary and post-secondary level who encourage and groom students to participate in regional and provincial competitions. These pit students against one another to prove themselves in 50 fields, such as refrigeration and air conditioning, mobile robotics, aircraft maintenance and repair—even service jobs such as cooking and floristry.

This August, Team Canada sent 29 students to São Paulo for the WorldSkills competition, where they competed against teams from 73 other countries. All were winners of provincial and national competitions; five brought home medals—two silver and three bronze—as well as 10 Medallions of Excellence. Here are profiles of four WorldSkills competitors—one alumnus and three of this year’s attendees—to tell you what it’s like to compete, and how it can jump-start a career. 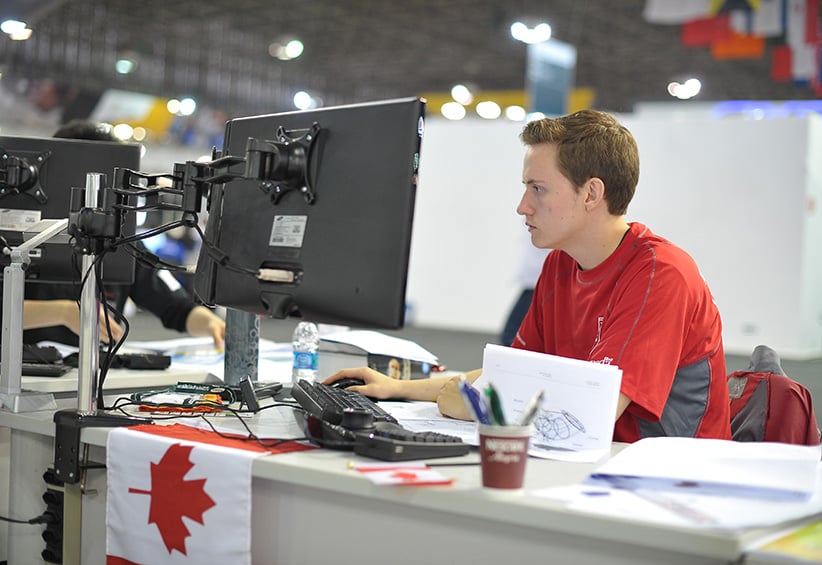 When asked about competing at WorldSkills in mechanical engineering, 21-year-old Carson Gustafson, from Lloydminster, Alta., is candid. “It was a pretty high-stress environment, but I was able to keep a cool head, and the time just flew by.” On the first day, he was asked to model a series of detailed drawings. “You know when you look at a manual for Ikea furniture, it shows how everything comes together, right?” he asks. “That’s kind of what we do . . . an exploded version of that.” Competitors were also given the outlines for a 1980s-style blender and asked to design a newer model based on instructions an engineer might give to a designer, or “just little scribbles and details of what they want.”

Gustafson has been pursuing drafting and design since junior high school. His father, a teacher, told him, “Well if you like this, you should take the computer drafting course at the high school.” From there, he met his drafting teacher, a staunch supporter of Skills Canada.

Gustafson took the two-year CAD/CAM engineering technology program at Saskatchewan Polytechnic, and now works for engineering firm Integra Engineering Ltd. in Lloydminster. “They had heard about how I had done at this national competition, and they offered me a position in drafting and design at their office,” he says. “They offered to pay for my post-secondary education; in turn, I would work for them after I graduated from that program.” 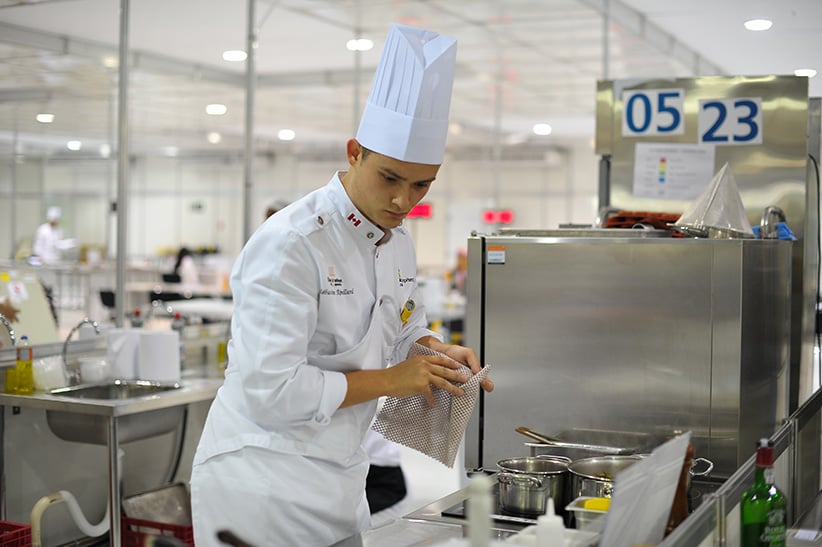 Montreal’s Sébastien Rémillard, who is only 19, has long been making a name for himself in the world of cooking. He attended l’École hôtelière de la Capitale in Quebec City and has been involved with Skills Canada since he was 14. Rémillard earned a silver at this year’s WorldSkills, along with the competition’s “Best of Nation” award.

The three-day cooking competition involved a series of menus the competitors had to prepare. “We have the same guidelines and the same ingredients, but we treat them how we want to, as long as the rules are followed,” he explains. One menu item called for a vegetarian soup, with the secret ingredient of Brazilian pumpkin, so Rémillard made an Asian consommé with a stuffed dumpling.

“They say at my school that in about the two years of training we do [for WorldSkills], you learn between five to 10 years of what you would learn in a restaurant, because it’s so intense.It’s really insane and amazing for learning,” he says. Rémillard plans to return to the restaurant scene in Montreal and set that world on fire. 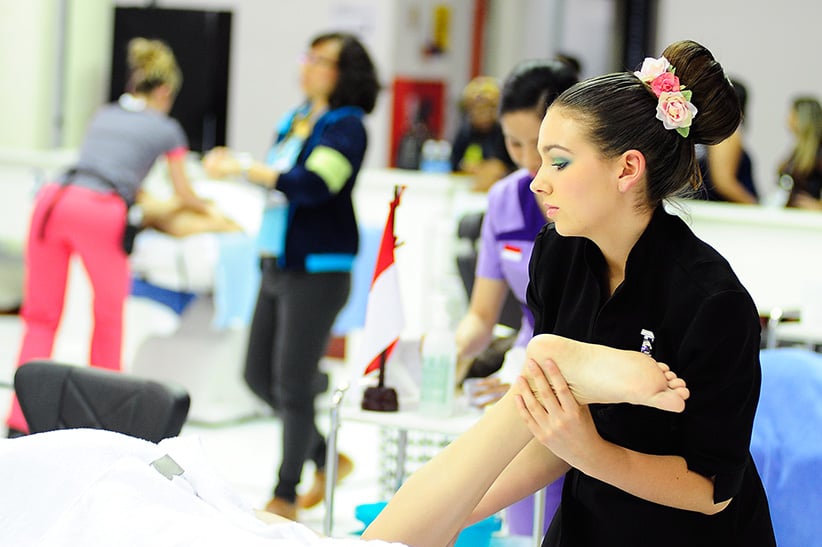 Kingston’s 20-year-old Kaitlyn Hoiles, who studies at St. Lawrence College in Brockville, Ont., found the WorldSkills to be a taxing experience. “For me, the language was a huge barrier, because all of our models spoke Portuguese and all of our products were in Portuguese,” she says of trying to communicate the different looks she wanted.

Challenges in the esthetics category included: a “spa day,” with a body cleanse, exfoliation, mud mask, body massage and facial; manicures and pedicures; and evening and fantasy makeup. Hoiles gave her best effort, but did not earn a medal.

“I definitely think it will help me with what I want to do,” she says. “It’s given me a very wide range of different skill levels and [I saw] so many different ways to do the same services. It has definitely helped me figure out what I prefer.”

She plans to move to a bigger city and work for a little while until she decides what to specialize in. 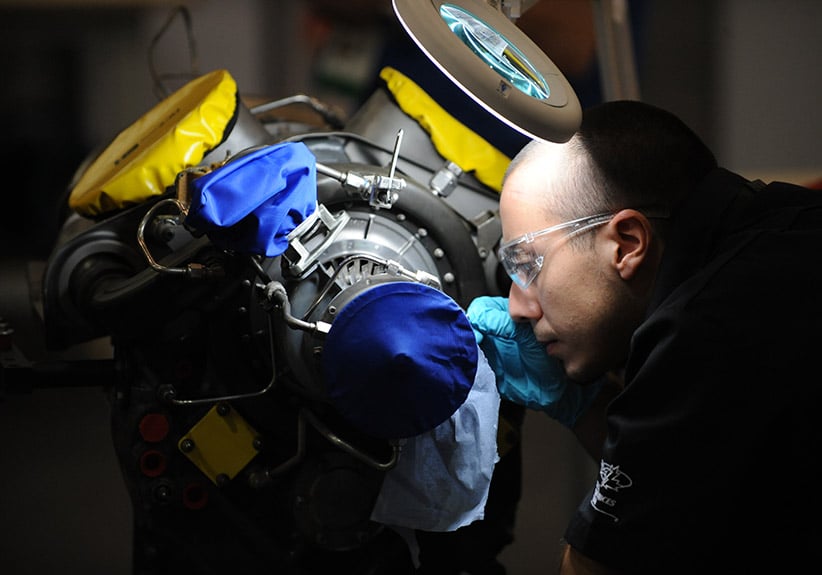 Ryan Gomes is no stranger to challenges: The Ontario native won bronze in the 2011 WorldSkills competition in London for aircraft maintenance and repair. Now he works as director of Tri City Aero Maintenance Inc. in Waterloo, Ont., and mentored this year’s competitors.

“You know, it was probably the happiest feeling,” he says, describing the moment when his mentee, Ryan Leedham of Nova Scotia, was called up on the WorldSkills stage to claim silver for aircraft maintenance and repair. The experience influenced his decision to pursue teaching.

“I’ve always loved teaching, and I’ve always loved aircraft maintenance. I remember one of the first jobs I had. I used to build homemade airplanes, and a good portion of that was actually holding seminars, where you taught people who wanted to build their own plane how to do it.”

Gomes’s instructor at Centennial College in Toronto suggested he participate in the provincial competition on behalf of the school. When he won WorldSkills, “it was one of the most intense things I’ve ever done,” he says, recalling the moment when he was called to receive his bronze medal. “I bawled, I bawled like a baby—I’d been training for a year-and-a-half.”

Gomes says competing at WorldSkills “fast-tracks your career, big time,” explaining that a competitor receives all of the training of an apprentice “and then some.”