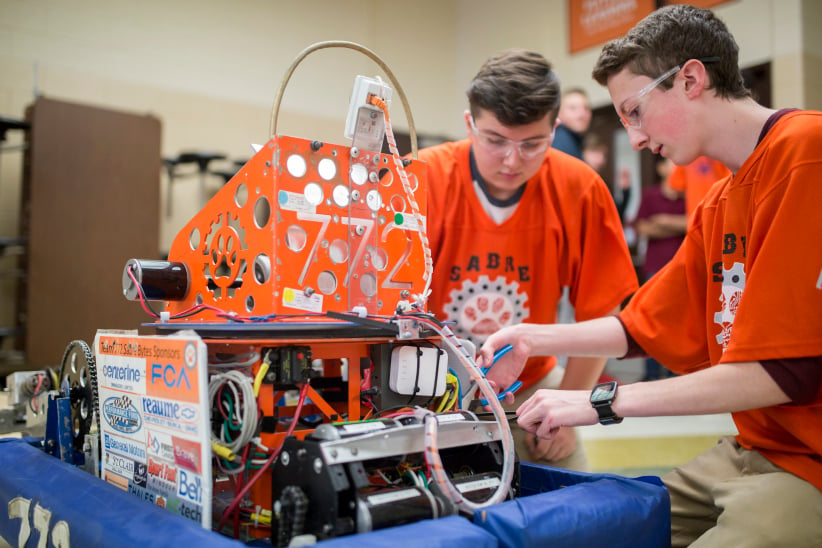 When the auto manufacturing industry crashed along with the U.S. economy in 2008, Windsor, Ont., suffered huge job losses. Attendance at post-secondary science, tech, engineering and math (STEM) programs also took a hit. Parents and students were shying away from STEM fields, because they weren’t sure there would be any jobs.

That’s when St. Clair College decided to promote engineering technology by bringing in an international robot-building competition, called FIRST, for high schoolers. Now, their investment is paying off.

Started in the U.S., FIRST Robotics has high school teams compete by building robots that carry out fun tasks: they throw Frisbees, play basketball, or climb walls. But it’s not only about the technology. Teams have to raise money and come up with a business plan. They build marketing and graphic design skills as they approach local businesses for sponsorship.

In 2012, St. Clair College teamed up with other partners like WEtech Alliance, a Windsor-based innovation centre, to expand participation, which has grown from one high school 11 years ago to more than 20 today.

Irek Kusmierczyk, WEtech’s director of partnerships, learned about FIRST from an intern, who showed him a video of robots playing basketball against other robots. He caught the fever. “I’ve never seen anything like it,” says Kusmierczyk, who is also a Windsor city councillor. He thought the robots were built by engineers or university students. “I was floored to learn it was high school students building these revolutionary robots,” he says. “It completely changes your expectations of what high school students can accomplish. You just realize the potential.”

Kusmierczyk instantly recognized the value FIRST could bring to the community, so he got to work. Together with St. Clair College, Windsor University and Sandwich Secondary, the school that hosted the first team in the region, they began building community enthusiasm. Four years later, one of the 20 teams in the Windsor-Essex Great Lakes region—which had to build a robot capable of picking up and moving objects like recycling bins—has gone on to win a spot at the world competition held in the U.S., which lasts three days and hosts 900 teams from 39 countries.

Ann Hetherington, marketing director for St. Clair College, says the robotics push has led to a huge increase in enrolment in STEM programs at the college, like engineering and health sciences, not to mention business and graphic design. The college’s revamped two-year electromechanical engineering technician–robotics program launched two years ago, and, with 40 students, it’s now full. Furthermore, St. Clair offers every Grade 12 student on a FIRST team a $1,000 scholarship to the college. Last year 28 students took them up on the offer.

Teacher Lee Awad runs the original FIRST team at Sandwich Secondary, which attracts 40 students every year, and where seniors mentor the new students. In the 11 years that he has been involved, the robots, business plans, and marketing have only gotten more sophisticated. “It’s a great way to attract kids to the tech wing of the building.”

One of the Sandwich Secondary team members is Allison Smith, who got involved after she saw a robot competition at Windsor University while she was in Grade 10. Now in her final year of high school, she plans on becoming a radiologist. As the communications and marketing person for her team, the Sabre Bytes, she had to step up when her team’s robot broke during a regional competition in North Bay last year. A mistake in the way the points were calculated meant the team missed a chance to advance to the next round; even if they had made it, the robot could not have been repaired. After that, their only hope was to win either a Chairman’s Award or Engineering Inspiration Award, both of which would automatically qualify them for the world competition. Smith had to present their case to the judges. “It was nerve-racking,” she recalls. “We all worked together—we had people run me through what we were supposed to say. It was a group effort.” Though unsuccessful, Smith is much more confident doing presentations and talking to people after her FIRST experience.