Students get co-op placements with both amateur and pro teams, including the Blue Jays and Argonauts. 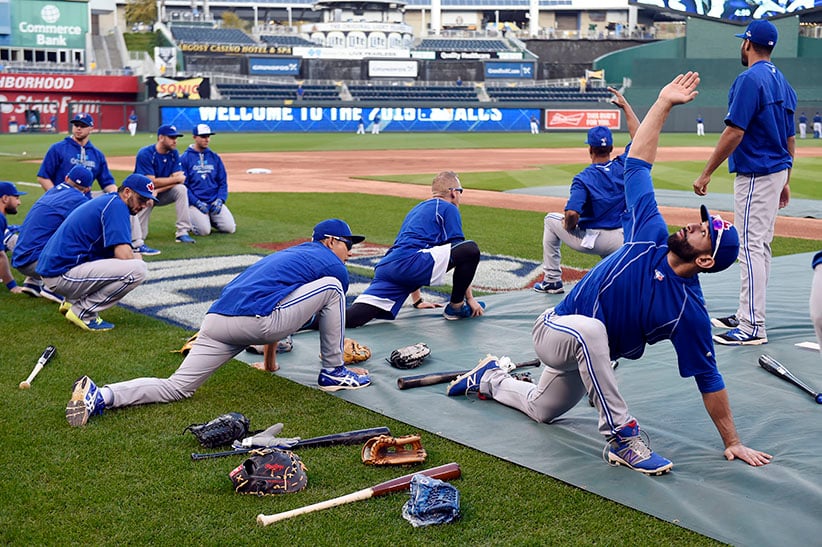 Jacquelyn LeDrew wasn’t quite sure what kind of career she wanted when she enrolled in a bachelor of science program at Mount Allison University in 2012. Outside class time, she gravitated to the Sackville, New Brunswick institution’s sports programs, and eventually secured a volunteer position as a therapist with the Mounties, the school’s football team.

“We taped [the players] before every practice and were there at every game,” recalls LeDrew, an athlete who plays basketball and flag football, and has danced competitively since she was a child. As her interest grew, the team’s head trainer suggested LeDrew enroll in Sheridan College’s athletic therapy degree; the trainer had been through the program herself. So after graduating from Mount A, she headed to Ontario.

It proved to be a great move. When LeDrew graduates next spring, she will not only have a solid grounding in treating and preventing sports injuries, she will have gained invaluable experience working with the Toronto Argonauts. In 2015, LeDrew also received the Dr. Ron Taylor Award, which is presented by the Blue Jays each year to two Sheridan students in the athletic therapy program (the other, Joshua Katz, did a co-op stint in the Blue Jays’ clubhouse).

The four-year degree, a bachelor of applied health sciences, covers a broad range of topics related to sports and athletic injuries, including upper and lower extremity anatomy, emergency treatment and first aid protocols and proper taping techniques, especially for hands, wrists and ankles—the regions of the body most prone to injuries.

The program offers instruction in advanced clinical assessment and rehabilitations for all categories of sports injuries, as well as business skills development for students who eventually want to run their own clinics. Students are guaranteed 1,200 hours of “embedded” athletic therapy experiences and must do practicums with community hockey teams, high school sports programs and college varsity leagues. The combination of classroom work and hands-on experience with local teams makes for full days, especially in the senior years.

One of LeDrew’s placements was with the Humber College women’s volleyball team, which went as far as a championship round. Playing at a high level, they were very attentive to how far they could push their bodies. “They were very on top of their injuries,” she says. In fact, LeDrew, who’s often been hurt playing sports and has some lower back issues due to her hip-hop and jazz dancing, says she’s learned a lot about personal injury prevention during the course of the program. “I used to get injured a lot,” she says. “I wish I knew then what I know now.”

The Argos select a couple of Sheridan students each year for an internship and LeDrew worked with the team for most of training camp last spring and through early summer. It was a crash course of sorts: “There are a lot of injuries in that sport,” she says.

Dealing with professional football players offered intriguing and sometimes unexpected experiences. Though the linebackers are huge and heavy, LeDrew was fascinated to realize that some of the running backs were smaller than her. She often gave the players guidance on stretching, but unlike amateur athletes, the Argo players were so muscle-bound that she and the other therapists had to show them how to do their own treatments. “Even the strongest of the therapists would have difficulty treating athletes who are so muscular.”

While LeDrew loved having the experience of working with the Argos, she realized that she’s likely not going to pursue an athletic therapy career with a professional sports team. Instead, after graduating this spring, she’d like to find work in a sports medicine clinic, helping amateur athletes and ordinary people deal with their pains and strains. “Ideally,” she says, “I’d like to open my own clinic.”