These Dawson College students missed out on a live gallery show. So they went virtual.

When the arts students took their year-end exhibit to a virtual gallery, thousands of eager guests rushed to see the immersive 3D space, complete with floating avatars, virtual drinks and a bevy of interactive features 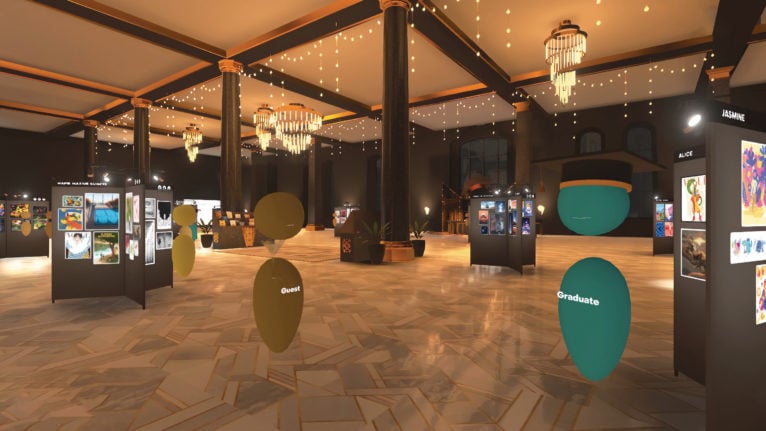 In mid-April, students in Dawson College’s applied arts programs who were getting set to graduate learned that their final exhibition, or “vernissage” (which means opening), would have to be cancelled because of the pandemic. It was supposed to be a major celebration: a culmination of three years of hard work in programs like illustration, interior design and photography.

“This was going to be our big night, where everybody presents their final projects and just revels in the work we’ve accomplished,” says Dalia Nardolillo, who graduated from the Montreal college’s professional photography program this past May. “It honestly broke my heart when I heard it might not happen at all.”

But thanks to some last-minute ingenuity, the show went on—albeit in a drastically different format than ever before. This year’s vernissage was held in an immersive, online 3D gallery, complete with floating avatars, virtual drinks and a bevy of interactive features. The idea was sparked by a fortuitous conversation between Pauline Fresco, illustration program coordinator and department co-chair, and Nick Ladd, a former student of hers.

“I knew we had to make it happen somehow,” says Fresco. “I thought, ‘Some of my alumni are working in augmented and virtual reality. Why don’t I reach out and pick their brains?’ ” She sent a Facebook message to Ladd, a two-time graduate of Dawson College who started an animation company called Studio Syro in 2018, which worked remotely even before the pandemic and was in the midst of creating a 3D virtual workspace.

In past years, students focused their artistic talents on the college cafeteria—an already impressive room adorned with stained-glass windows that used to be a congregation area for a convent—transforming it into a gallery space. The various arts programs would take turns exhibiting final projects, with each show hosting hundreds of guests, including friends and family, faculty and industry members.

When news about the virtual exhibition idea spread, Dawson students mobilized to help Studio Syro’s developers design the space. As with past vernissages, each program would present on a different night and each would have its own decor. The programs formed small committees that worked directly with the studio on concept art. Without the constraints of the real world, they were more free than ever to make the space their own.

“The theme for the illustration program’s vernissage was The Great Gatsby and the roaring ’20s,” says Valentina Fiallo, who created most of the designs for her class’s virtual gallery. Guests were greeted with lively jazz upon entering an opulent art deco hall with marble tiled floors, dangling chandeliers and stately columns, all meticulously designed by the decoration committee with Fiallo at its head.

Attendees could sign in as a student, faculty member, industry recruiter or guest, with each category represented by a different coloured avatar. The space was navigable like a video game, by clicks or keyboard buttons, with student work displayed on modular walls, similar to a real gallery. Links to social media and websites were clickable next to the work, which guests could zoom in and out of for a better look. Guests could talk to one another with a microphone feature, or clink a virtual drink procured from the old-timey bar—complete with a bespectacled barman. Even the bottle labels on the drinks were carefully designed by students. 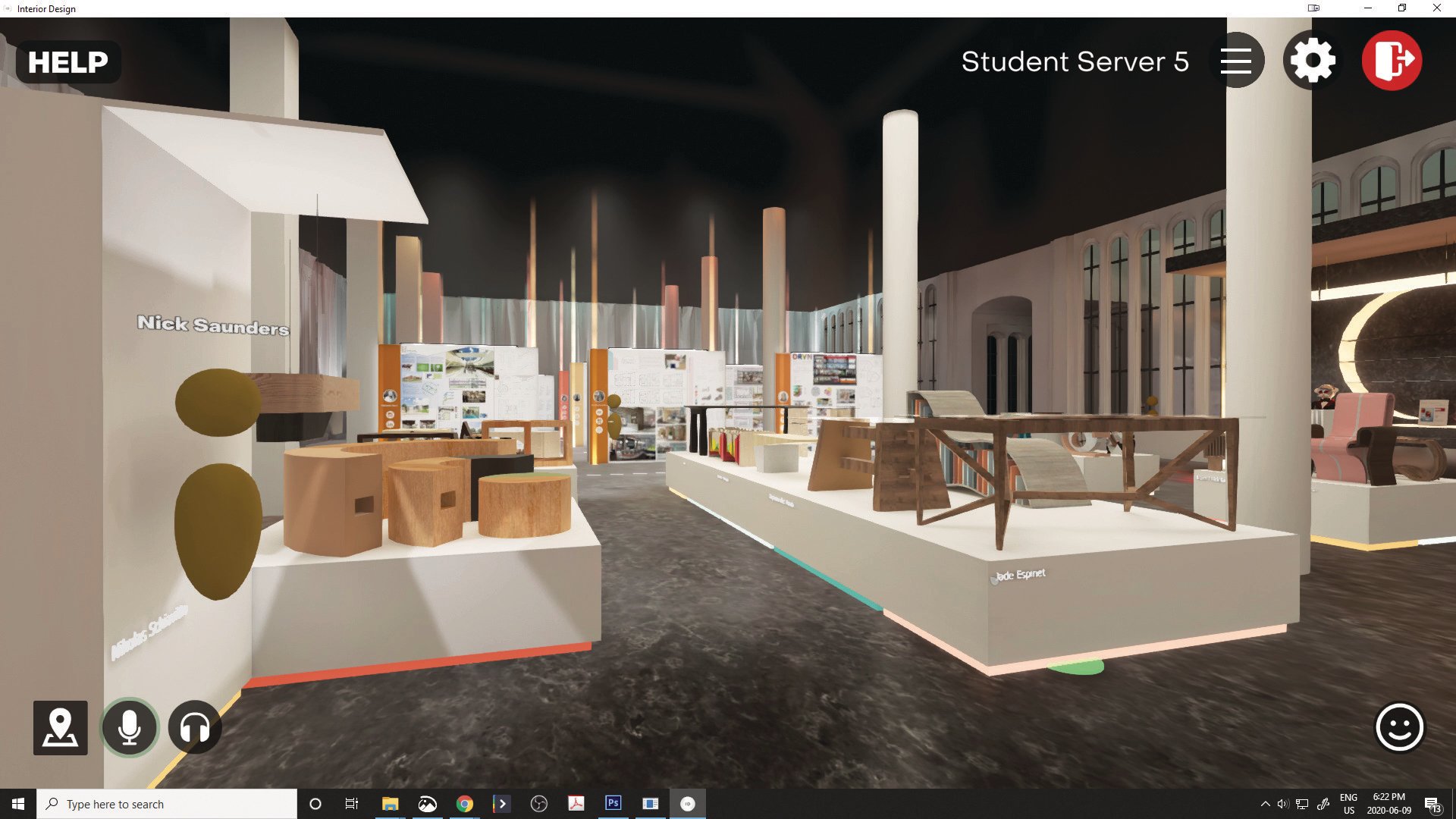 The interior design program’s room had a modernist feel, with mirrored ceilings, black marble floors and custom furniture designed by the students. “In the end, we were able to showcase even more of our work than normal,” says program graduate Jessica Luongo. “We wouldn’t have been able to fill it with custom furniture in real life.” The gallery even had a cranberry-coloured signature cocktail called Pantone 94, after the colour swatch. Students circulated a recipe for the cocktail—vodka cranberry, with a splash of champagne—before the show, so they could sip real drinks as they clinked glasses in the digital realm.

There was one major hiccup in the plan—the exhibitions were far better-attended than anyone had anticipated. The first program to exhibit was illustration, and on the evening of June 3, nearly 2,000 people tried to log on to the gallery application at once. The server crashed, leaving developers scrambling to set up multiple servers to host all the guests. It took about an hour to get everything up and running again.

“The night of the vernissage, my whole family gathered around the computer and experienced it together,” says Nardolillo. “It felt like everyone was really there, physically and virtually, cheers-ing the way we would have done at a real vernissage. I was sad not to be able to give my classmates one final hug, but delighted to have something that felt so real after the shock of having the in-person event cancelled.”

The vernissages, which are still accessible online, were such a roaring success the college is considering them as a permanent fixture alongside future in-person exhibitions.

This article appears in print in the Maclean’s 2020 Canadian Colleges Guidebook with the headline, “At capacity on opening night.” Order a copy of the issue here. Subscribe to the monthly print magazine here.