Aidan D’Souza has been ‘going to’ Seneca College most of his life. He’s built websites, run cross-country and done an Instagram takeover. He also found time to earn a diploma. 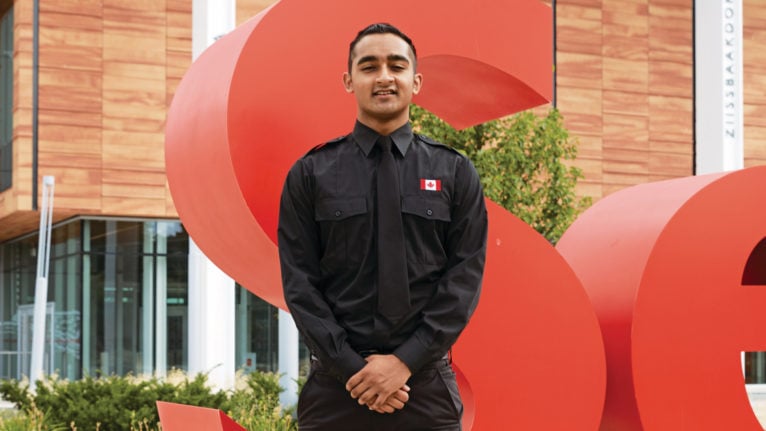 I started going to the Seneca summer camps when I was eight years old. I took a lot of lessons there over the years, including gymnastics, karate and web design.

This is kind of cheesy, but I remember the cafeteria. It had so many food options I could choose from. Lemonade popsicles used to be my favourite thing to eat on campus, especially on a nice hot summer day. Also, I remember building my first website. I was into Batman at the time—the movie Batman Begins had just come out, so I made a Batman website. I put up on it pictures of different characters from the movie.

All the years I spent at camp built my connection to the college and made me choose Seneca as a post-secondary institution.

During the program, I had the opportunity to go on a ride-along. Seeing first-hand what police officers do every day was amazing! I was in the passenger seat next to a York Regional Police sergeant. One of the calls we responded to was about a missing person. It was an elderly man in Markham, Ont., who only spoke Mandarin, I believe. He was lost, confused and new to the area. The officers set perimeters and looked between blocks. They found him in 30 minutes. I knew I wanted to make a difference like that one day.

I learned about law, psychology and mental health in that program. I was taught that policing is teamwork. When looking for the missing man in Markham, the officers worked as a team. Now, in 911 communications, I am the person dispatching teams to solve problems.

Growing up, I was an active person. In high school, I was a varsity athlete. That’s how I got recruited for the cross-country team at Seneca. I was just starting college when the Seneca communications team reached out to me. They had seen me on Twitter and on television when I was named athlete of the week at school and asked if I wanted to do an Instagram takeover. It involved showing the college’s Instagram followers around an event and posting my own pictures and videos. I gained confidence from that Instagram takeover and started giving tours at open houses. I recruited students at the Ontario College Information Fair. I mentored hundreds of students at Seneca, helping them adjust to college life, and helping them with the online aspects of the college. Growing up, I would have never imagined myself speaking to a magazine or being seen on TV. After I did that takeover, I said, “Why not?”

In January, I was hired by the York Regional Police to be a student cadet. A lot of hard work paid off. In the future, I hope to work for a law enforcement agency in Ontario. For now, I just want to continue enjoying college. Even with the pandemic going on, we do virtual events. We try and make the best out of the situation.

This article appears in print in the Maclean’s 2020 Canadian Colleges Guidebook with the headline, “Growing up at college.”