It’s big on campus, just not in the classroom 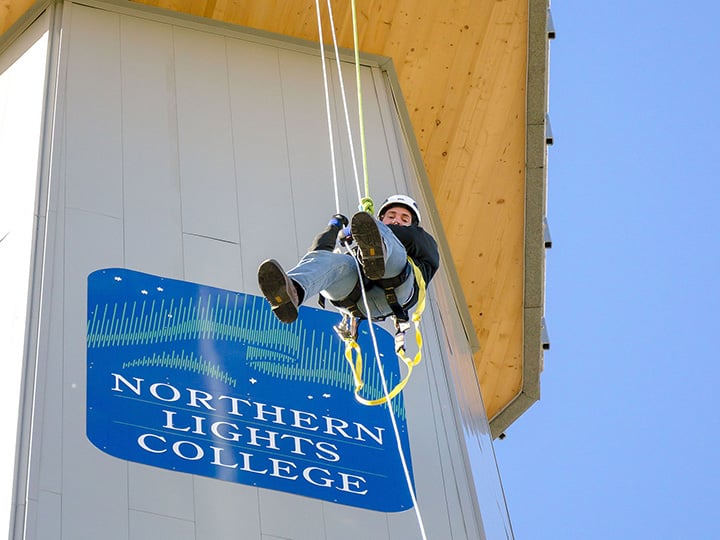 At Northern Lights College in Dawson Creek, B.C., the campus is deeply invested in clean energy. Take the Energy House building, for starters. It boasts both solar and geothermal energy, a wind turbine and a rainwater recovery system. But the clean-tech curriculum is limited to a couple of programs, many of them week-long continuing education courses, because the world hasn’t caught up to its potential. “We don’t want to offer a program that offers false hope,” says Mark Heartt, dean of trades and apprenticeships at NLC. There are still a few hurdles to overcome, not the least of which is the misconception that B.C. is and always will be a resource-based economy. “Where we struggle is putting on quality programming where a student can actually get some employment in that area,” says Heartt.

The exception is the college’s wind turbine maintenance technician program. Graduates find work in the wind-energy sector, but the program had to wait for the industry to emerge. “We had some forward thinkers here at the college who decided we should get on board with wind turbines,” he recalls, adding that when the program was first introduced in 2010 there were only 34 in all of B.C. Back then, the job prospects were unknown, so much so that students in the program were taught basic certification for electrical and industrial mechanics. That way, “if the students couldn’t find work in the wind energy sector, they would be employable in other sectors in our area,” says Heartt. Now there are 217 wind turbines in the province, according to the Canadian Wind Energy Association.

He believes that early-adoption incentives for homeowners—tax credits or other financial benefits—are necessary to get products into the mainstream and demonstrate the viability of clean tech. From there it will be a trickle-down effect to the classroom.“When the average taxpayer can see some benefits in clean energy, you’ll see a huge buy-in, and that will make the biggest impact on the market,” Heartt says, “and the biggest impact for us.”

B.C.’s clean technology industry contributes $15 billion to the province’s GDP and employs more than 123,000 people, according to the British Columbia Sustainable Energy Association. “This is six times more than the number of jobs in oil and gas and mining combined,” says the association’s executive director, Ali Grovue. It’s a question of misinformation, according to Grovue, who says groups like hers need to educate the majority of people who still don’t make the connection between green living and economic growth. “There seems to be this public perception that they’re mutually exclusive, which is the opposite of what’s actually happening.”

Numbers like these should have prospective students flocking to places like Northern Lights College to grab the wave of incoming job growth. “Of the engineers and developers in this industry, few of them are looking for work,” adds Grovue.

The draw is easy to see at Okanagan College’s campuses in Penticton and Kelowna. By 2025, the entire college is expected to be net-zero energy, meaning the annual energy consumed by any building will be offset by the amount of renewable energy it creates. For Rob St. Onge, the college’s energy manager, “I fully expect that this will be a no-brainer in 10 years.”

Right now they’re about halfway to their net-zero goal with the help of geothermal technology and two of the largest solar panel systems in B.C. Students on the Kelowna campus even shower with water heated with solar thermal arrays on top of the residence. The Jim Pattison Centre of Excellence in Penticton was built to meet the need for tradespeople in the sustainable building industry and renewable energy sector, and features several renewable energy sources, including an elaborate rooftop solar panel system that generates almost half the building’s energy. Eventually its inner workings will serve as teaching tools. But, like the centre’s two solar thermal arrays, they “are not currently being used for educational purposes because they are there waiting for the programs to develop around them.”