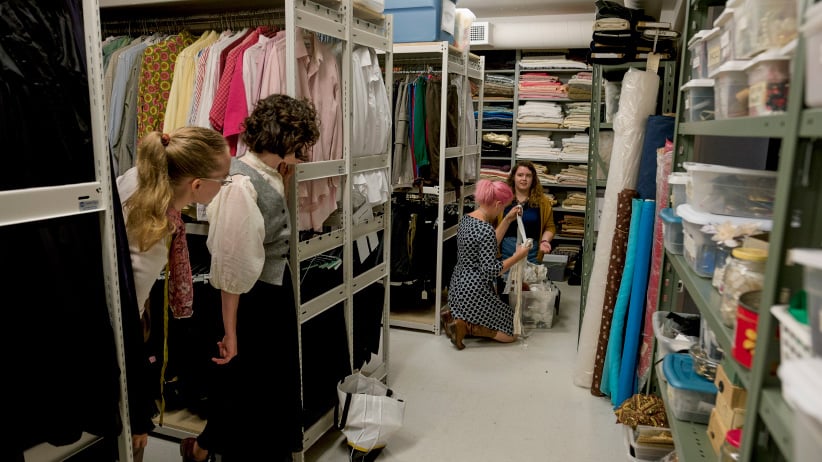 Students look on as teaching assistant Julia Copp, second from right, helps out in the costume room during Costume In Performance class. (Photograph by Darren Calabrese)

For Jaya Ducharme, getting dressed up doesn’t mean wearing the latest trendy fashions from the mall. Instead, the Dalhousie University student gets decked out in a corset, full crinoline and early-18th-century dress (which she sewed herself, of course).

“Corsets have been my main interest since I was really little,” Ducharme explains. “Their construction was the most sophisticated in the 1800s, when they really figured out pattern drafting and how to shape them to create a nice form on the body.”

Ducharme has been sewing her own clothes since she was 14. As a student in the costume studies program at Dalhousie, she has been able to combine her love of sewing and tailoring with her desire to learn about world history.

The costume studies program, with yearly admissions of approximately 20 students, is a true marriage of history and fashion, mixing research and academic skills with hands-on construction techniques. Classes include theatre history and basic sewing skills, and over the course of four years, students learn everything from how to sew on a button to how to construct a bespoke suit. In their fourth and final year, students engage in a mammoth project for their class on the aesthetics of historical dress. After picking a specific time frame—Ducharme’s class homed in on the period from 1881 to 1886­—students select a fashion plate or painting from that era. Then each classmate must replicate, in full, the clothing of the woman in the selected image—undergarments included.

“This year we’re doing our corset and the bustle in the first semester,” Ducharme says. “After Christmas, we’ll do the shift, the little underdress that goes under the dress . . . and then the dress after that.”

It’s a full-year undertaking, and one that requires patience.

But that’s just one side of the costume studies program. The program is also part of the Fountain School of Performing Arts, which sees the students create all the costumes for the four plays and one opera the school puts on every year. 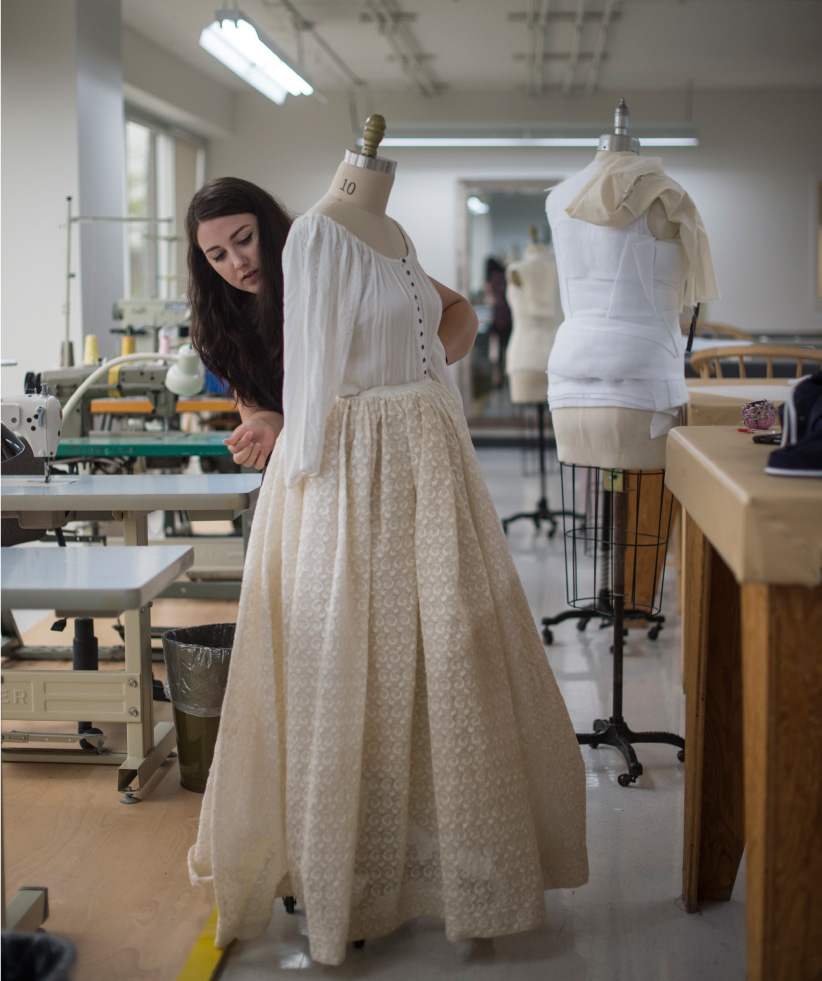 The pace of the theatre work is completely different, says Anneke Henderson, a professor with the program. In these classes, students create costumes specifically for the stage, with fabrics that allow for movement and with elements designed to facilitate a quick change. Since the clothing is worn by their fellow students in the acting program, costume studies students have live models to work with.

“[The students are] working in very tight time frames,” Henderson says. “It’s exciting. It’s hectic, but we do a production every five weeks . . . and we start from scratch.”

And while both the historical and theatrical projects are time-consuming, with plenty of finicky details, Henderson says students are very proud of their completed work.

“It’s a lot of hard work, and it’s slow in a lot of cases, because you’re working with your hands and it takes a lot of concentration,” Henderson says. “But I think what you create is so highly satisfying that all of that is irrelevant in the end.”

Henderson teaches both modern and historical tailoring techniques, which are skills that can be useful no matter what the student plans for a career. The professor says grads have worked in the film industry as tailors and restorers, and have even parlayed experience from the course into starting their own fashion lines.

After she graduates in the spring, Ducharme plans to apprentice with a renowned tailor in the United Kingdom so she can learn more about making “fancy things.”

“I do love corsetry and beautiful ballgowns, so for a long time I thought I would like to do theatre or film. But after doing some work for theatre here, I found that kind of work also includes peasants’ clothing, which doesn’t interest me,” Ducharme says with a laugh.

While there are complex techniques that are necessary to have over the course of the program, Ducharme says it’s not necessary for interested students to have previous experience. All prospective applicants need are a strong work ethic and an interest in fashion and history. “[Fashion] is the story of people and society,” says Ducharme. “It’s all reflected in the clothing.”