Crane training at this Alberta college leads to an uplifting career 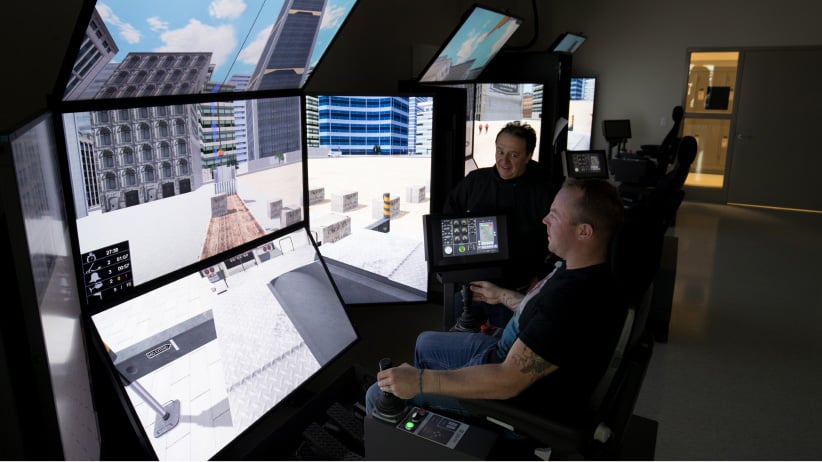 A student sits in the operating chair of a computerized crane simulator at SAIT Campus in Calgary, Alberta. (Photograph by Chris Bolin)

How do you train somebody to do a dangerous job without exposing them to risk? At the Southern Alberta Institute of Technology (SAIT) in Calgary, instructors use simulation technology to help bridge the gap between theory and real-world practice. It’s part of a larger trend toward employing virtual reality in training and education in construction, just as it’s becoming increasingly popular in ﬁelds ranging from the military to health care.

SAIT opened a 2,812-sq.-m crane and ironworker facility—one of ﬁve new facilities opened by the polytechnic this year. It has a fully functioning crane maintenance shop, a yard with boom trucks and mobile cranes, and 12 state-of-the-art crane simulators—the largest array in North America.

“Simulators have been around for a while, but the early models didn’t have the ﬁdelity the modern ones do,” says Jim Szautner, associate dean of the School of Manufacturing and Automation at SAIT. “The technology has evolved over time, and it’s just now that we’re starting to see simulators get widespread adoption.”

The modern devices used in education are physically immersive, with true-to-life motion cues that replicate the feel, as well as the look, of what it’s like inside the operator’s box of a real crane. Sophisticated software does calculations in the background of the interface, adjusting tension and tilt according to how the machinery would behave in real life.

“When the load is, say, 1,000 kg, it would simulate what it’s like to lift a 1,000-kg load.” says Szautner. “So with the simulators that have a motion platform, when a student goes to lift up a load, the seat actually tilts forward a little bit, so they get that physical feedback. If they get some pendulum or swing, the physics engine calculates that load and the speed of it, so it knows how much momentum it has.”

Simulators give students a chance to practise working in conditions that may not be easy or safe to reproduce on a real crane. Instructors can set simulators to mimic bad weather, low light, a load that’s too heavy or a sudden mechanical failure. Cranes, for example, deal with suspended loads that can behave unexpectedly at certain angles. A crane that’s rated to handle 23 tonnes may not actually withstand that much weight in every position. An overload in real life can cause a crane to tip over, or a load to break off. On a simulator, students practise managing this situation without putting themselves or others at risk—and with true-to-life motion simulation, they train their muscle memory as well as their ability to think under pressure.

The virtual reality industry isn’t without its problems, however. A 2017 research report by the Construction Industry Training Board in the U.K. highlighted beneﬁts, like better assessment of students through tracking data and cost-effectiveness, but also pointed out that the ﬁeld is in its early stages. As of yet, there are no ofﬁcial standards or accreditation systems for virtual reality tech, content creation is in its infancy, and since the technology is developing so rapidly, hardware can quickly become outdated. Still, Szautner says that instructors are reporting quicker uptake on the controls and less “freezing up” when students start practising on a real crane. Virtual reality may have a long way to go, but it seems to be making a positive impact on learning at SAIT.

Like other skilled tradespeople, crane operators typically have to be registered as apprentices before they can start their training. Becoming an apprentice means getting hired by a company that’s willing to take on your training.

SAIT trains crane operator apprentices, but it also offers a nine-week pre-employment program. Like apprentice trainees, students in this program get dedicated time on the simulators, which Szautner says makes for employees who work more safely and are more job-ready. Students who complete the pre-employment program are eligible to take the same ﬁrst-period exam that apprentices take in Alberta. (The rules governing one’s journey from apprentice to fully fledged crane operator vary slightly across the country, since apprenticeships are provincially regulated.)

When asked what makes a person a naturally good crane operator, Szautner recalled when SAIT hosted an episode of The Amazing Race Canada in 2016. Four teams competed on the simulators in a “zig-zag course,” which is similar to an exam that crane students take in SAIT’s training programs. The Amazing Race teammates took turns navigating a load, like a 200-litre drum weighing about 1,000 kg, through a course of pylons. Only one team succeeded.

“The team that was successful, ﬁrst of all, communicated well and worked as a team, but importantly, they were both very calm. They made small movements and worked through the challenge methodically,” Szautner says. “The teams that were unsuccessful got frustrated and quickly gave up when the crane didn’t react as quickly as they did.”