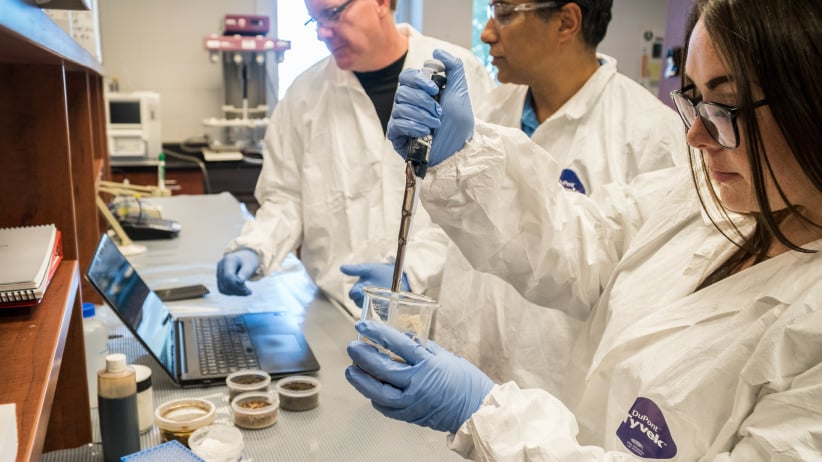 At just 27 years old, Teaghan Wellman is the director of research and development at Cypher Environmental in Winnipeg, Manitoba. It’s a long title for the young executive, and all the more impressive considering she graduated from Red River College’s life sciences program just last summer.

But Wellman gained a foothold at the local company during her time at school, working as a student researcher on a project that paired the college with the company. “It’s unique and rare for a student to have those kinds of opportunities,” Wellman said. “It was really unique for me to apply my practical skills (and) my learned skills from the college, and some of that textbook work, and put it to a real-world problem . . . and something that could provoke a change, and something that could be sustainable for the economy over time.”

The partnership started in 2014, when life sciences instructor Said Hassan started talking with ofﬁcials from Cypher, an environmental services company, and pitched the idea of pairing with the college. Red River would be able to provide eager students to do some work, as well as lab space and equipment. In exchange, Hassan’s students would make vital industry connections in their ﬁeld, and gain practical experience developing a product.

That product is Dust Stop Municipal Blend, a compound that removes moisture from roadways. It lacks the toxic salts that are traditionally used for the job, which can then run off the roads into aquifers and cause rust on cars. Dust Stop isn’t harmful to roadside vegetation, and is made from starches and sugars.

Hassan helped connect his students with the team at Cypher, bridging that gap between school and career. “Getting the students to hit the ground running—so to speak—and get started, it is a challenge that at times requires an initial little bit of training, and getting them to do background research and acquaint themselves with the topic,” Hassan said.

Having students involved in industry projects is a big focus for the instructor. He says he attends networking events as often as he can, to make connections that will help his students ﬁnd work and learn more about their perspective ﬁelds. “When we engage in applied research with industry, one of the main things we have to have in mind is student involvement,” Hassan said. “Even beyond that, how the project leads to enriching the curriculum and how we teach students. So student engagement is actually a major issue in [the] applied research that we do.”

Hassan says, over the years, he’s seen students attend co-op work placements and research opportunities with companies across Manitoba, and it almost always enriches their college experience. “The beneﬁt to students is enormous,” Hassan said. “It’s just a great learning opportunity, but also an opportunity where they are not just working for the industry but also having our support.”

For Wellman, that partnership lead to a full-time job, and also changed how she saw her own place in the world. “Coming from a Manitoba institute, where we’re so wrapped up in the things going on here in Winnipeg, and then being able to see things from a global landscape and seeing how we could work to impact global problems, is a really positive experience as a student,” Wellman said.

And Wellman isn’t the only college grad working at Cypher Environmental. She estimates that close to 70 per cent of the current staff are Red River grads, with nearly 20 per cent of those starting as co-op students that were kept on long term, like herself. “We’re very big advocates for the college and what they’re doing,” Wellman said enthusiastically. “We beneﬁt from them and they beneﬁt from us, and together we have the possibility of making differences.”

And the next product is already in the works. Dust Stop Municipal Blend is a hit in the trials Cypher has done, with initial testing suggesting it lasts longer than traditional salts on roadways. Cypher is already using the product on some streets in Winnipeg, and shipping it as far away as Brazil. The eventual goal is to have Dust Stop used by municipalities, instead of harmful magnesium blends. But it is a product meant for the summer months, and in a cold climate, winter roads present a new challenge. For a city like Winnipeg, a separate product is needed for an icy, snowy road.

And Hassan is up for the challenge. “Just a couple of weeks ago, we decided we would actually focus on developing a novel de-icing product, which would be very applicable to Manitoba and other cold climates.”