For 49 Nova Scotian students, dorm life is all about community 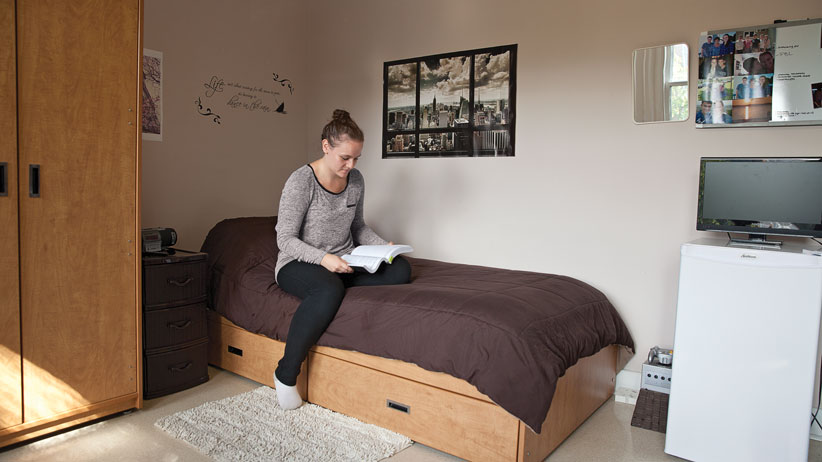 Nineteen-year-old Benjamin Hammer needed no reason to read bedtime stories with his residence mates. Swaddled in pyjamas, they gathered in a lounge one evening with a collection of children’s books and held a bedtime story night. “It’s nice to have people to come home to,” he says.

The home he’s referring to is Dalhousie’s Mini Rez, three renovated 100-year-old Victorian houses with a common courtyard shared by 49 students. Any student applying for a residence spot on campus can request a room, and it costs the same as a single bedroom in some of Dal’s high-rise buildings—$7,150 per year, plus a mandatory meal plan costing at least $3,350 for non-returning students. “I’m going to have the rest of my life to live in heartless industrial complexes,” says Hammer, an urban planning student who has returned to Mini Rez for his second year. “I saw Mini Rez in pictures and thought: I could call that home.”

While other Dalhousie residences house up to 716 students each, this small-scale community on the Studley campus helps people immediately click. Mini Rezidents play cards, chess and ukulele in the lounges and laundry rooms; they walk to class together and round each other up before going to meal hall, and they play pool, often modifying the rules to allow more than two to join. First-year student Kayla Soares and her mates have secret knocks to tell each other when they’re at the door, while some of her neighbours leave their doors propped open. “I wasn’t considering living in residence until I heard about Mini Rez,” she says. “When I think of residence hallways, I think of a lot of people and get overwhelmed.”

Although Mini Rezidents must eat in other buildings, they do have two kitchens to themselves. There, they have baked Thanksgiving pies and even made heating pads by cooking rice and stuffing it into socks. “It’s not unusual for people to break out the pancake batter at 2 a.m. in the middle of study sessions,” Hammer adds.

The residence is not only co-ed but also culturally mixed. At a Thanksgiving potluck last October, one Canadian newcomer, who wasn’t familiar with the traditions of turkey and pumpkin pie, brought a Hawaiian pizza. “It added to the cultural mosaic,” says Hammer. The students picnic on rainy days, play ninja games in the park, and once watched a documentary about ice while eating ice cream. They celebrate Hanukkah, Christmas, Kwanzaa and Eid.

Each room is single, furnished and quirky. Hammer’s is an adapted closet, with an obscure shape that allows headroom on the staircase below. “There’s room for everything I need and nothing else,” he says. One house has 12 students and two bathrooms with just two showers, while another has just eight students and an entire corridor of showers. “There are showers, showers, everywhere in there,” says Hammer, who himself shares a bathroom with three others. However, many of the rooms are spacious; a few even have fireplaces, bay windows or walk-in closets. Soares’s room is painted pink.

While some live in here for the community, others like it for the quiet. Patrick Wu, who was assigned to live in Mini Rez for first year, decided to return for his second as well. “My choice was to live in a clean community without lots of noises.” The downside for Wu, a music student whose best friends all live elsewhere, is that he must practise his violin outside of residence; he once got a noise complaint for playing at 10 p.m. Many students prefer a louder, more party-filled atmosphere when they first move away from home. As such, there is no wait list or competition to get into Mini Rez.

Other small residences in Canada include Presbyterian College Residence at McGill, which houses 36 students, and Post House at Wilfrid Laurier, which houses 40. Although old houses may be expensive to operate, Nicole Cross, residence life manager for Dalhousie, says, “if anything, they’re seen as drawing students to residence.”

Many universities cluster students by shared interests or academics in comparatively mega-sized residence buildings—the University of Guelph, for example, has 1,821 in South Residence—but Cross says students particularly love Mini Rez. “If people first arrive and wanted to be part of a big rez,” she says, “once they get to be part of the community, they tend to like to stick around.”