Why wait? How high school students are earning college credits 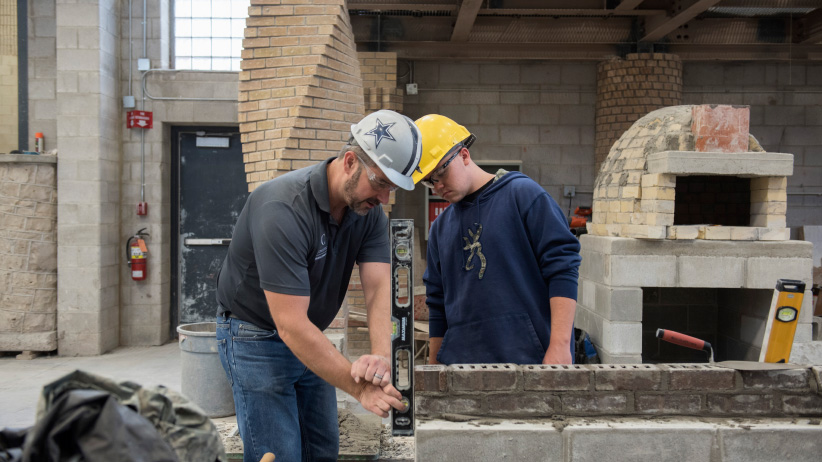 Ontario Grade 12 student Johnathan Borutski, an aspiring stonemason, is pursuing his studies in two places at once: high school and college.

In Alberta, 20-year-old Ryley Perepelitza chose to combine high school and college studies to get a jump start on his academic goal of a teaching degree from the University of Alberta.

The two students are headed for different careers, but both are tapping into an increasingly popular movement that grants academic credits for high school and college courses at the same time.

The reasons for offering dual credits, as they are known, varies widely. They’re used at high schools to connect with both academic high achievers and otherwise disengaged students who are at risk of dropping out. Colleges use dual credits to recruit talented high school students or as a tool to introduce others to apprenticeship training.

Either way, the desired outcome is the same—a smooth transition from high school to post-secondary education.

Borutski struggled in some high school classes but is thriving in a first-year masonry fundamentals course at Conestoga College in Waterloo, Ont. He is surprised at where he now finds himself.

“I never thought I would be in college in Grade 12,” says Borutski, 17, who is now earning credits for his high school diploma and basic apprenticeship training. “I can put that on my resumé.”

Equally pleased is Perepelitza, now studying at Portage College’s Cold Lake campus. “It was a good way to get ahead on college classes,” he says. The on-campus experience gained during high school, he adds, “really made the transition a lot easier” once he became a full-time student at Portage.

Earlier this year, the Alberta government announced $16.4 million over four years to expand a dual-credits program first introduced as a pilot in 2011. Since then, 10,000 high school students in Grades 10 to 12 have signed up for the option.

In a statement announcing the funding, Education Minister David Eggen praised the program’s success in raising high school attendance rates and predicted a doubling of student participation in dual credits over the next four years.

Sixty-five per cent of senior high school students at Lakeland Catholic School District in Bonnyville, Alta., earn dual credits in a project introduced in 2013, according to Amanda Wildman, the school’s coordinator of career and technology studies. “It is beneficial to our students because it provides a learning opportunity that will increase high school completion and increase our students’ participation in post-secondary, whether that is college, university or trades,” she says. “It [also] provides valuable career exposure and exploration to help them make a more informed choice about post-secondary training.”

Tim Urlacher, a Grade 12 science teacher at Lakeland’s Assumption Junior/Senior High School, estimates that half of his students sign up for dual credits. “The kids are excited about it,” he says. “They start to see the value of the classwork in the real world.”

One of Lakeland’s partners is Portage College, which works with six regional school divisions to offer trades and academic studies. “We are a rural college with seven campuses across northeast Alberta, and bringing opportunities [to students] is important to us,” says Portage associate dean Robin Tizzard. Since some rural high school students are uneasy about moving to a big city for post-secondary studies, she says dual credits “allow them to sample courses [and] build confidence so they can be successful students.”

In southern Alberta, one First Nations education authority uses dual credits to expand curriculum options. In 2014, the Kainai Board of Education introduced an early-childhood education dual credit at its high school through an internet link to instructors at Lethbridge College.

“We wanted [students] to have an opportunity to be in the comfort and safety of our school environment while also experiencing some aspects of being a college student,” says Kainai deputy superintendent Annette Bruised Head. “Giving them exposure to a college-level course was the most valuable aspect, with the rigour that comes with a college-style course.”

Then a Grade 12 student at Kainai High School, Tiana Weasel Moccasin, signed up for the dual credit to learn about child care and get a taste of college. “I would never have known how to write papers and manage my time,” says Weasel Moccasin, now at Lethbridge College.

“The offerings are based on students coming to campus so they have a sense of what the environment is like,” says Tony Bellavia, associate vice-president, access and regions, for North Island. “They are expected to perform in an adult institution.”

In Victoria, Camosun College has the largest, most varied dual-credit enrolment through the South Island Partnership, created by the college and five area school districts.

There was a sharp rise in dual credit registrations in 2014-15—up to 4,267, from 130 in 2005-06—with expanded course offerings over that time, according to a study by the B.C. Council on Admissions and Transfer that used data from the partnership. On academic performance, the study found that 75 per cent of dual credit students earned a B- average or higher, with one-third of them choosing Camosun for further education.

“The traditional and still the most common [registrants] are students in Grade 11 and 12 who want a bit of a challenge and to get a leg up on their post-secondary education,” says John FitzGibbon, director of transfer and articulation for the council. But he adds that vocation-oriented students use dual credits as a down payment toward apprenticeship training.

Kelly Betts, director of the South Island Partnership, says that dual credits offer high school students “a head start, a chance to focus on something they feel is relevant and to get that career preparation.” As well, the partnership provides mentors to students straddling two education settings.

By earning college credits in high school, students can lighten their first-year academic load. An added bonus is financial: a high school student’s first-year college course is often paid for by the local school district. That was true for Solomon Lindsay, a high-achieving high school student in Victoria. Initially, he took one dual credit at Camosun, and later qualified for participation in the college’s electronics and computer engineering technology program. His first-year college courses are paid by the South Island Partnership, with the rest of his tuition covered by his academic scholarships.

The dual credits “gave me an exceptional opportunity to see what college had to offer, and it turned out to be a good choice,” says Lindsay, who’s eyeing an engineering career. When he completes his Camosun studies next year, he could transfer to third-year studies at the University of Victoria.

Unlike B.C. and most other provinces, Ontario established its dual credit system in 2005 expressly for underachieving students or potential high school dropouts.

“These potentially not-great students actually excel when they are in a program they are motivated by,” says David Armstrong, project officer for the School-College Work Initiative, which is jointly funded by two provincial ministries. “I have never met a dumb kid, but I have met a huge number of unmotivated kids, and our program finds their motivation.”

Back at Conestoga, Borutski expects to graduate from high school next spring with his dual credits counting toward an apprenticeship certificate in masonry.

“I have learned I can do so much more than I have been told I can do,” he says of his college experience. Standing beside a four-foot-high concrete block wall that was built in four hours to course specifications, he says, “I know I can do stuff.”