Universities and colleges: choosing the right fit in Canada

How do you know if a prestigious school is really the right fit for you? Here are some factors to consider when choosing which post-secondary pathway to follow. 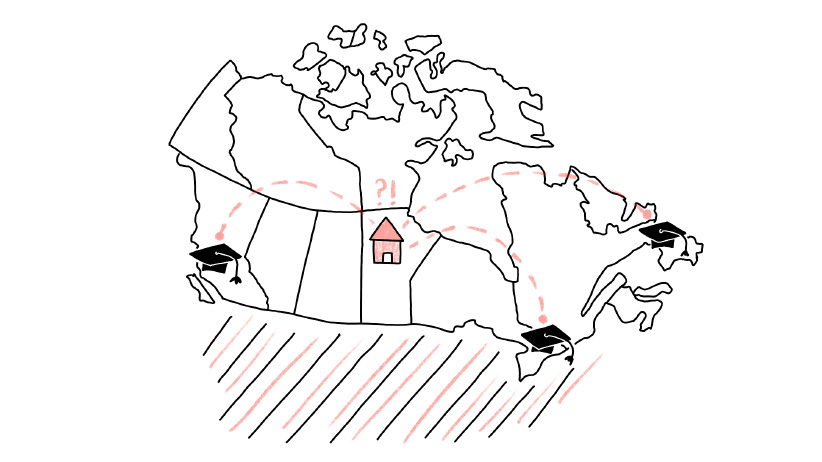 Perhaps it was an offhand remark from an older cousin or a recommendation from a favourite teacher. Maybe you’re competitive by nature and can’t help but aim for the music school that’s hardest to get into, or you’re easygoing and just want to stick with your best friend as you make the transition out of high school.

Whatever factors go into the decision, many high school students already have an idea of what they want to study, and where. But it’s important to research institutions thoroughly before committing, says Robert Astroff of Toronto-based Astroff Consultants. “Often people are driven by the reputation of a school, but it’s not a fit for everyone,” he says. Here are some factors to consider.

MORE: The Maclean’s Guide to Getting In to University or College

Location, location
In a country as large as Canada, geography can’t help but come into play. Cost is a huge factor, of course—going away for school doesn’t just mean paying for your own housing, but also for often costly tickets home for holidays. But another issue is distance from family and other support systems. While some students might be ready for fully independent living, others will benefit from having friends and family close by to offer support when needed—like during tough, often overwhelming exam periods.

Stretch yourself (but know yourself, too)
For Max Georgopoulos, a second-year commerce student at Dalhousie University, one major factor in his decision to move from Toronto to the East Coast was to expand his horizons. “I felt like my experience would be a lot richer if I were to go somewhere that’s very different from where I’ve always been,” he says.

That said, don’t put yourself in a situation that will be too challenging or a poor fit for your personality. For instance, a program with a co-op component might require you to move frequently to take on different jobs, notes Bill Anderson, director of engineering admissions at the University of Waterloo. “If students aren’t comfortable with that, we encourage them to look elsewhere.”

Size matters
Campuses and the towns and cities they’re based in vary widely: compare tiny Mount Allison University, with its 2,300 students (almost half the population of its hometown, Sackville, N.B.), with the more than 60,000 attending the downtown campus of the University of Toronto, itself in the core of Canada’s largest city. Think about what kind of environment you want to study and live in, and what kind of relationship you want to have with professors and other students. Some people thrive in the hyperactivity of a large campus and would feel stifled in a small town, while others find huge classes and busy city streets impersonal and seek a tight-knit community to be part of.

One reason to attend a larger school is breadth, says Andrew Arida, director of undergraduate admissions at UBC. “A good fit for UBC would be someone who wants lots of different options in terms of what they want to do with their education,” he says, “not just to get a degree in the subject, but to combine it with other related experiences.”

Popularity doesn’t equal quality
“Don’t let the prestige of a school make or break your decision, because it really doesn’t matter,” advises Georgopoulos. Stringent admission requirements and a high entry GPA don’t necessarily correlate to the best program—or, most important, the best program for you.

“Just because it has a good name doesn’t mean it’s the right fit,” says Astroff. “Certain universities are more competitive, some more co-operative, some more collaborative. You want to make sure you’re in a good situation.”

Be flexible
At a certain point, you have to make a choice. But it’s a good idea to keep your options open when it comes to programs and schools—you might find your interests shifting after your first year. At the Emily Carr University of Art + Design, for example, first year is the foundation year, during which students are required to pursue a more general program before narrowing their focus in the second year. The reason? “Often students who are coming out of high school say, ‘I’m totally into animation,’ because that’s what their friends are doing,” says admissions associate Joni Taylor. “Then, once they get here, they change their minds.”

Look at the details
A post-secondary program is much more than the diploma you end up with. Your day-to-day life, your job prospects, the peers you encounter and the career you’re preparing yourself for should all be part of your decision. “You really should know the program, the workload, the extracurricular activities and what this is going to produce in the end,” says Astroff.

Georgopoulos, for example, chose to study commerce at Dalhousie partly because of its mandatory co-op program and its focus on hands-on learning. “I get three separate work terms, which I think is invaluable,” he says. “I only needed a 75 to get in as opposed to Queen’s commerce, which is a 90—but personally, I think I’m getting more out of my education than anyone not doing co-op.”

Anderson can’t stress enough the importance of being clear on what you’re getting into before you commit—especially in a direct-entry school like his, where opportunities to change one’s major or focus are extremely limited. He encourages applicants to research options, career paths and the realities of the program they’ll be entering. A student choosing between computer engineering and environmental engineering, for example, shouldn’t begin one of the two at Waterloo expecting to be able to easily switch into the other. They would likely be better off in a general engineering program at another institution. “Once you get into a program, you’re starting to commit yourself along a path,” he adds. “And it isn’t necessarily easy to switch paths.”

Go with your gut
Many experts strongly recommend visiting a campus before accepting any admissions offers. “We advise students to go to the university during the school year,” says Astroff, so they can get a sense of what life is like when classes are in session—and of how the place feels. A campus might be a good fit, he adds, “if you can walk into the university and it feels like home.”

Arida agrees that research can only go so far in choosing the right institution. “A good fit isn’t just determined by data points or things you read,” he says. “There’s also something a little more esoteric. You feel like you belong in the place, and there’s no way to feel that until you come for a visit.”