For hire: The eyes and ears of a vet near you

Vet techs are the eyes and ears of the clinic. But the job is so demanding, many don’t stay. 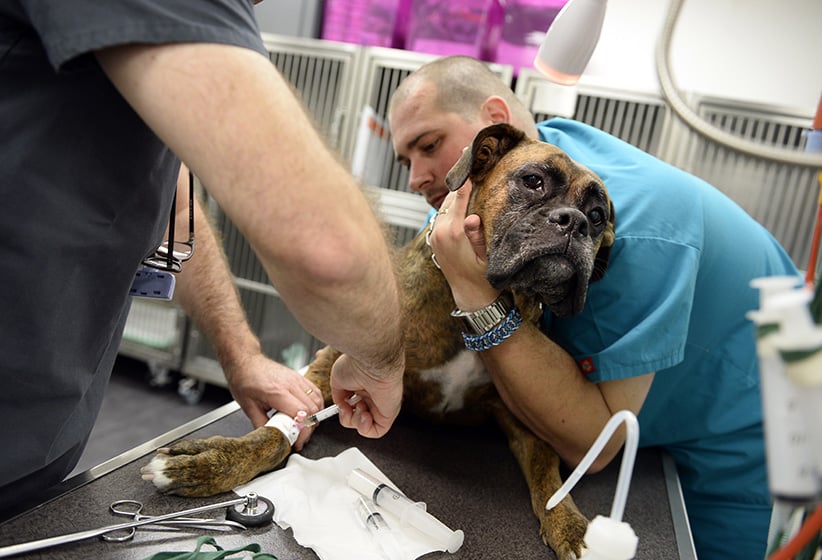 A dog is treated for cancer at the Eiffelvet veterinary clinic on 22 September, 2014 in Paris. (Lionel Bonaventure/AFP/Getty Images)

In 2014, Darci Burtch, 29, packed her bags and left Toronto for Burns Lake, a remote town in the Interior of British Columbia. The Lakes Animal Friendship Society, a not-for-profit, was looking for a vet technician to help with low-cost vaccinations, spaying and neutering of pets on First Nation reserves in the province. Because the communities lack the resources to keep some animals healthy, those animals can become dangerous.

“This is not something I ever thought I’d be doing,” says Burtch, who was working as a vet technician at the Toronto Humane Society when the offer came in. “It’s not generally a job that comes up, because of lack of funding.”

Burtch’s job at Burns Lake is to educate people about animal safety and disease control, because both children and adults run the risk of being bitten by wild dogs. As a vet tech, she does not perform surgery, nor do the vaccinations herself; that job is left to a doctor of veterinary medicine, who has a four-year degree and has passed a licensing exam.

Most often, techs work in small, private practices on a team with veterinarians, where they are responsible for monitoring anaesthesia, X-rays, rehab, even dentistry.

“We can provide that first level of care, and we are the vet’s eyes and ears,” says Burtch.

Burtch attended Northern College in Haileybury, Ont., where she completed the two-year vet-tech program and went on to specialize with an advanced diploma in wildlife rehabilitation.

Admission is primarily based on a candidate’s average in Grade 12 math, biology, chemistry and English, and volunteer work is highly recommended. Burtch, for instance, was a long-time volunteer with the Vancouver chapter of the Canadian Animal Assistance Team. Since the programs are so competitive, schools usually take candidates with the highest averages. For example, at Sheridan College, students need an 85 per cent average.

The Burns Lake opportunity is one example of the unique work available, says Elise Wickett, president of the Ontario Association of Veterinary Technicians. “It can be very rewarding to help care for both animals and people.”

Becoming an RVT means attending one of 18 colleges recognized and accredited by the Canadian Veterinary Medical Association (Quebec has its own regulatory body) and completing the two-year program. To be fully registered, candidates must also pass a national exam administered by the American Association of Veterinary State Boards. Each province has its own additional requirements.

Vet techs are in high demand in Canada right now, in fields such as lab research, industry sales, the pet food industry, animal shelters, and livestock care. Wickett says there are more jobs than there are techs. Retention is part of the problem, because the job is so physically demanding that many techs don’t stay in the field long.

On the flip side, there are more applicants to college programs than spots available. For instance, at St. Clair College in Windsor, Ont., there are 500 applicants annually and only 60 seats.

And education in this area is expanding. In Toronto, Seneca College just started a large animal health and production program, which allows vet techs to learn how to create nutrition plans, help with breeding and reproduction research, or manage pain, primarily of livestock and horses. The program is an extra year on top of the two years it takes to become a regular vet technician, and the first round begins in January 2016, consisting of three terms over 12 months.

Maria May, the chairwoman, emphasizes that the program is intended to provide students with technical skills that will set them apart.

“It provides them with a specialization, when not a lot of people in the industry have these skills.” She hopes it results in better pay for these graduates as well, she adds.

On average, RVTs earn between $15 and $23 per hour, but the pay is contingent on the type of work performed and level of experience, and it varies according to geographic location. Vet techs are typically paid hourly, and work 30 to 35 hours a week if employed at a private clinic.