Nearly half of students surveyed had forgone healthy food to pay for books, tuition fees and rent, according to an exclusive report from Meal Exchange 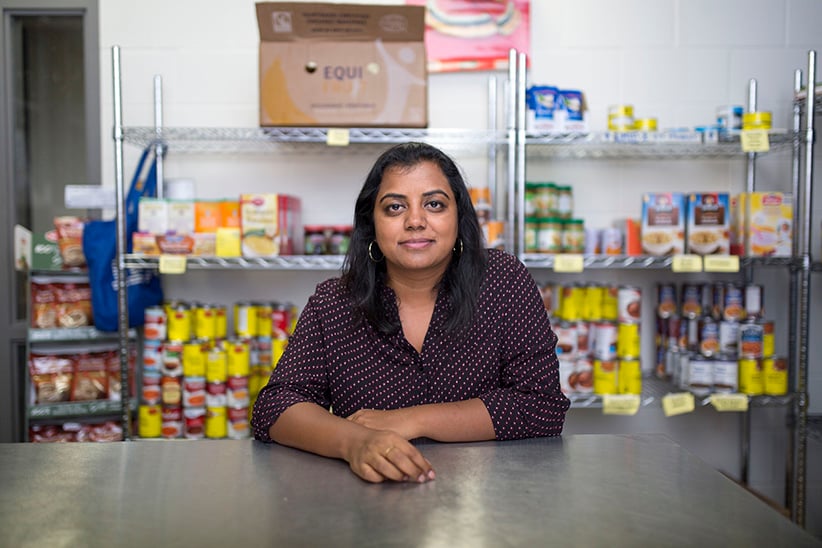 A message in bold and italics emblazons the home page of the Lakehead University Student Union food bank’s website. “We are in desperate need of food!!!” it reads. “Any amount that you can give would be greatly appreciated. Thanks to everyone who helps out!!!” The page urges students at the Thunder Bay, Ont., school to get in touch if they have “an emergency need for food.” The urgency of the post reflects a troubling new trend on university campuses. As post-secondary education costs continue to rise, students are finding it increasingly difficult to afford food. Across the country, food-bank visits are up, and a new study shows almost half of 450 students surveyed at Lakehead lack food security.

In an exclusive report shared with Maclean’s, the national campus food organization Meal Exchange found that 39 per cent of the 4,013 university students it surveyed at five Canadian universities, including Lakehead, compromised on the quality of food they ate, did not eat balanced meals and worried about running out of food. In “Hungry for Knowledge: A study assessing the prevalence of student food insecurity on five Canadian post-secondary campuses,” some students told researchers they were skipping meals or not eating for a day. One in four said food insecurity affected their physical health, while one in five said it was impacting their mental health. Nearly half had forgone healthy food to pay for books, tuition and rent.

The 2016 food access study was designed to fill what Meal Exchange saw as a gap in available data on the affordability of post-secondary education. While Statistics Canada has calculated the increase in the average cost of tuition—showing it had nearly doubled to $6,191 between 1993 and 2015—and student debt, which now sits at $26,500 for new grads with a bachelor’s degree, there is piecemeal information on the health and social costs of getting the post-secondary credential all but required for a decent job and higher future earnings.

For more than 20 years, Meal Exchange has rallied students on campuses across the country to address food issues. Its 2015 Trick or Eat campaign collected 172,000 kg of food in a Halloween door-to-door campaign, which was passed on to 85 community food agencies to distribute. But executive director Anita Abraham says it is imperative that they now focus on the very students they work with as governments trim budgets, forcing colleges and universities to recoup more and more of their costs from students. “Students are not necessarily impoverished,” says Drew Silverthorn, the study’s main author, “but they’re living in a reality that is not setting them up for success.”

The students particularly at risk are financially independent from parents, namely those funded by band councils, student loans and bank loans. The most vulnerable—international students, Aboriginal students and students with dependent children—were some of the most food insecure, prompting Meal Exchange to call for better government funding for post-secondary students. The group also published specific policy recommendations, calling for a national survey of food and housing security, a commitment to Truth and Reconciliation initiatives to reduce barriers and encourage Aboriginal students to pursue higher education, and exploration of a guaranteed annual income—an oft-debated way to smooth out income inequality—and how it could work for post-secondary students. 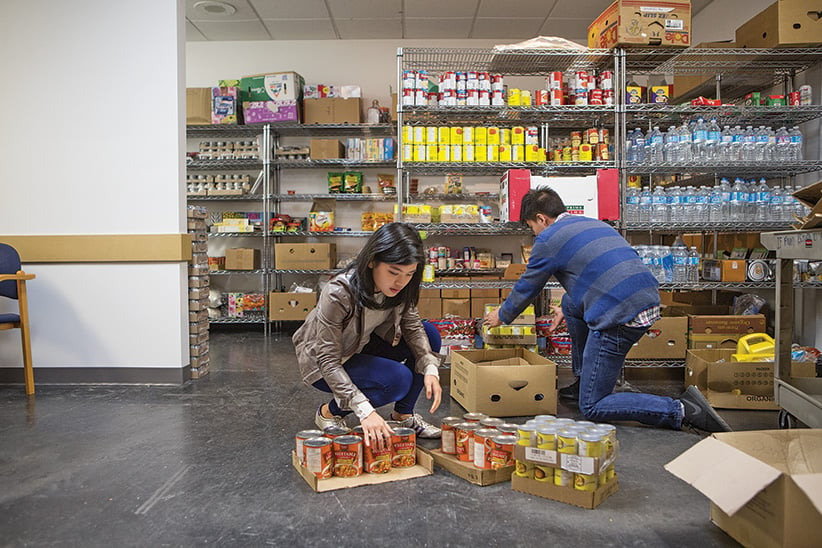 Students at the UBC food bank. (Photograph by Della Rollins)

Though Abraham wasn’t surprised by the data, she did find it compelling that just 16.8 per cent of the students who reported being moderately or severely food insecure said they would use a campus food bank, despite the fact that her organization counted 104 hunger-relief efforts on Canadian campuses, up from 51 in 2004. “The majority of people who are hungry are not going to food banks, so what are they doing?” says Abraham. “They’re looking for alternative ways. They’re borrowing, rationing or they’re just going without.”

Maclean’s consulted with Meal Exchange on two food-security questions answered by 17,271 students on our 2016 student satisfaction survey. The data mirrors that of Meal Exchange, where 38.2 per cent reported some level of food insecurity. Both Meal Exchange and Maclean’s relied on the Food and Agriculture Organization definition, in which food security is described as “physical and economic access to sufficient, safe and nutritious food to meet . . . dietary needs and food preferences for an active, healthy life.” The Maclean’s data shows just 11 per cent of 6,584 food-insecure students had visited a food bank at least once in the previous year.

At the University of Winnipeg, Hazim Ismail got into trouble when his Muslim family in Malaysia disowned him and stopped paying for his education after they discovered he was gay and an atheist. A student union representative recommended the campus food bank, but it had limited supplies and capped the amount of food he could get in one visit. “I remember doing things like getting white bread from Dollarama and then getting margarine—which is expensive for me—and then pouring sugar on it, and I would sustain myself on that for a week,” he says. “For me, it was the fact that I had run out of money. [Tuition] costs a lot of money per term, and immigration requires for international students to have a minimum amount in their account that shows they’re financially capable of providing for themselves for a year.”

He started a GoFundMe campaign to raise money for his 2016 fees, which attracted media attention, followed by threats. Worried that he might be deported, he applied for refugee status—which was granted in April 2016—and started volunteering for the food bank when he learned volunteers were entitled to bigger rations. Even so, the stigma of welfare assistance prevailed, especially when so many of the school’s international students come from wealthy families. “There’s this sort of shame that comes with using the food bank,” Ismail explains. “There are other international students getting $10,000 a term that is spent on overpriced shoes, while I’m getting all excited over free eggs at the food bank.”

At Ryerson’s Good Food Centre in Toronto, a room the size of a cozy walk-in closet, three student staff are responsible for feeding more than 600 students a year. Coordinator Monica Khapler says some users ask them to cover donation boxes with bags so they can walk through the student centre without people knowing they’ve been to the food bank. Others say they are only using the facilities “temporarily” when they sign up, even though most will become frequent users. Staff do not judge. “We know that times get tough, and, with OSAP [an Ontario student loan], sometimes you have to wait a while [for money].”

Up in Thunder Bay, where food insecurity was highest of all five campuses in the study, food bank users go out of their way to avoid being seen. “Students have requested secret drop-off locations and times, called to inquire what the busiest time of the day is and even requested that volunteers exit the room while they ‘shop,’ ” says coordinator Robert Strachan.

But the Meal Exchange study notes that even if the stigma could be countered, a food-bank diet is not optimal for health either, and points to a 2014 nutritional analysis of hampers distributed at the University of Alberta that showed insufficient levels of Vitamin A, zinc, fat and protein.

“We know food banks are not the answer, but we know they’re indicative of a problem,” says Abraham. “So if a food bank exists, it’s because someone has said, ‘Students need access to free food because there are multiple factors contributing to their financial instability.’ ”

Now that Meal Exchange has some data to build on, Abraham says they have to start advocating for food security on campuses and explore the idea of a guaranteed annual income for students. She would like to expand the survey to more schools to get a better understanding of the impact of food insecurity on academic success, as well as work with universities to find innovative ways to counteract the problem. “Post-secondary institutions and governments are responsible for the well-being of their students,” she says. “We need to stop pretending that traditional approaches, such as food banks, are addressing the root causes of food insecurity. It’s time to share that responsibility and shift the conversation to long-term solutions.”