Free tuition is good. But it’s just a start.

Affordability and accessibility remain barriers for education. But they're not alone—and that must be addressed. 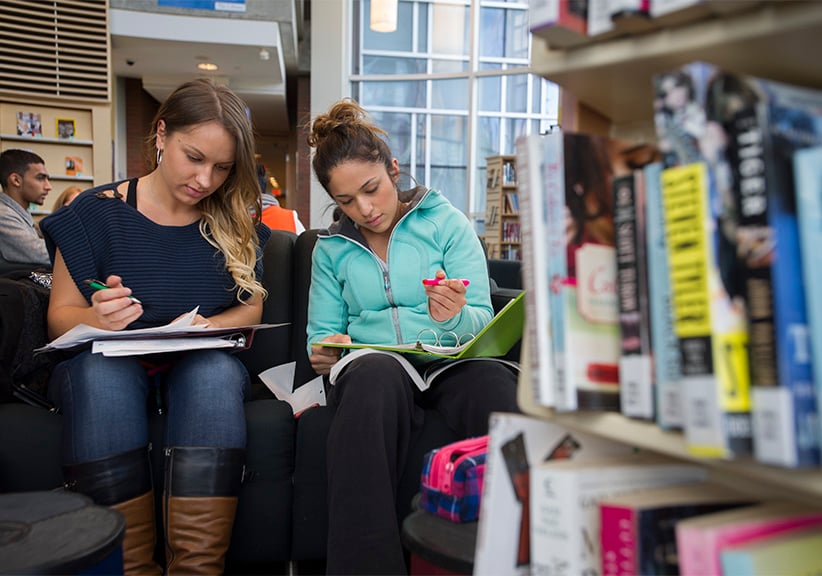 Third year nursing students Valentina Blinova and Irene Moran study in the fireside reading room at the library on campus at UOIT in Oshawa, ON. (Photograph by Cole Garside)

For a guy hauling around almost $300 billion of debt, Charles Sousa was in a buoyant mood. Ontario’s finance minister had just announced that families making less than $50,000 would soon have free post-secondary education, and when we spoke, it was as if he were daring me to find fault in the idea. After all, he said, the Liberals were removing a critical barrier to higher education, the looming threat of a massive student debt. The idea was instantly applauded by a syllabus of education groups.

Days earlier, the education debate had exploded after Donald Trump declared that he “loved the poorly educated,” a phrase so heartbreakingly absurd that for a split second I thought Trump’s platform must have been crafted by Horshack from the old TV sitcom Welcome Back, Kotter. If a society doesn’t aspire to educate its citizens to the highest possible degree, what good is it?

Free tuition is bold social policy and fundamentally ought to be considered a social good. We accept it for grade school, so why not for post-secondary education? After all, higher education equates with higher income rates. In their peak earning years (ages 50 to 54), university graduates (including the much-maligned arts majors) make an average of $80,000, while community college grads earn in the high 40s, according to Statistics Canada. But young people who stop their education after high school make less than $40,000, and those who don’t even finish high school end up with even more depressed incomes, just over $30,000. So access to post-secondary education matters, as does the type.

But in politics, nothing is quite what it seems. As has been pointed out, the math behind the Liberal promise of “free tuition” is off. The province covers up to $6,160 in tuition, but Statistics Canada says the average undergrad tuition is $7,868. So, if you define “free” as having to pay, at minimum, $1,700, then you probably failed both English and math.

Still, it’s easy to be snarky. For all the quibbling about the gaps, Sousa’s audacious policy move has generated a much-needed national conversation around the affordability and accessibility of higher education. The question is: are these really the biggest barriers to post-secondary education?

That is where things get surprising. “Student debt gets a lot of media attention, however, the amount of average repayable debt has not drastically changed over the past 15 years,” says Martin Hicks, head of statistics at the Higher Education Quality Council of Ontario (HEQCO). “According to the National Graduates Survey, 50 per cent of undergraduate university students who graduated in 2010 incurred student debt and owed $28,580, up slightly from $27,204 in 2000.” The same pattern is true for college grads.

So, if student debt has not fundamentally ballooned, has it become a barrier to education? Here again, the stats may surprise you. A few years ago, HEQCO and the Canada Millennium Scholarship Foundation conducted a test called “Willingness to Pay” to see if student debt prevented Grade 12 students from enrolling in post-secondary education. Turns out, it didn’t. However, the thought of losing future income did. “The possibility of opportunity costs—years of not earning an income—was a stronger influencer than debt for low-income students making decisions about higher education,” says Hicks.

A case in point: Overall enrolment in post-secondary education is rising faster in Ontario than in Quebec, even though Ontario has had much higher tuition rates. In 2012, Quebec students held massive protests over small increases to what is the country’s lowest tuition, but it didn’t change much. “The direct costs of university and college do not seem to drive down participation rates overall,” Hicks says.

Make no mistake, affordability and accessibility are still key issues. Low-income families, rural residents and Aboriginal communities have dramatically lower post-secondary participation rates. But looking at the issue solely through an economic lens misses other significant factors at play. A study done by University of Ottawa professor Ross Finnie, called “Does culture affect post-secondary education choices?” found that cultural factors such as family, background and, crucially, an awareness of the benefits of higher education, are critical to outcomes. Children need to be taught the advantages of continuing education. “We must adjust our policy levers from their past emphasis on affordability to focus on these newly identified cultural factors,” Finnie writes.

But the chances that any government will actually pay significant attention to issues confronting young people are slim. Most policies and most of the public money overwhelmingly favour the old over the young. “When looking at total social spending (including health care, education and social services) federal and provincial governments combine to spend around $33,000 per person aged 65-plus compared to less than $12,000 per person under age 45,” Paul Kershaw told me. He is the author of Measuring the Age Gap in Canadian Social Spending and founder of Generation Squeeze, a lobby campaign that represents young workers. “In Ontario, medical care for seniors now costs more than the entire grade school, kindergarten and child care budget, and it is more than three times larger than all post-secondary spending in Ontario,” Kershaw says. Our society values the health of seniors far more than the education of our youth. Period.

For all the talk about boosting the economy through infrastructure, the biggest job multiplier and engine of growth—our youth—gets the short end of the stick. Sousa’s policy announcement, though laudable, is just a start. While we laugh at Trump’s professed love of the poorly educated, our young people are still at the back of the line, waiting to pay for a future most of them will never be able to afford.