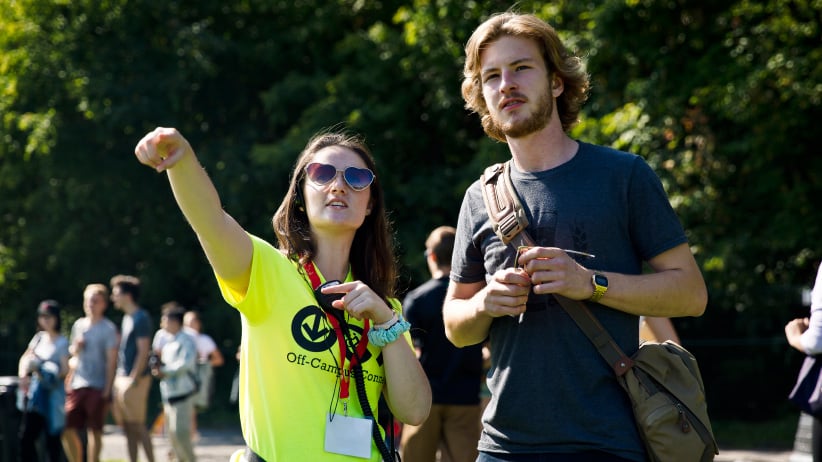 When Elaine Patterson graduates from McGill University in 2018, the English literature major (with minors in French and communication) will have the usual academic transcript to present to a potential employer.

As importantly, she will leave McGill with a second transcript describing the leadership and other skills she developed in volunteer activities on campus over the past four years.

The “co-curricular record” (CCR), an official summation of a student’s out-of-classroom learning, is emerging as a valuable tool to describe a graduate’s university experience beyond the lecture hall. With the CCR growing in popularity—available at an estimated 50 universities in Canada—advocates now aim to raise its profile with employers.

“It’s a way to show that you are involved in something other than your academics, and that is so beneficial,” says Patterson. “I know when I am applying for jobs I am going to want to use the CCR.”

MORE: What grades do I need to get into Canadian universities?

A student volunteer since arriving at the Montreal campus in 2013, Patterson is a former Students’ Society of McGill University vice-president who managed social media, events and club services for undergraduates. As a residence life facilitator, she also organized dorm activities that brought together students with similar interests. She attended weekly student-run conversational French sessions, enrolled in McGill workshops for emerging campus leaders and, this fall, assisted with the university’s student orientation program.

Her volunteer—and some paid—activities are listed on her CCR, with the time commitment and learning outcomes vetted by a third party, usually the program sponsor. Students are expected to reflect on what they learned through their non-classroom experiences. “Many of the things I’ve done on the CCR, such as working on different councils, have taught me so much about how to work with people with a range of personalities on a team,” says Patterson.

Some university administrators see the CCR as an answer to employer complaints that graduates lack the soft skills, such as communication and interpersonal relations, required for today’s diverse workplace. “Across the country, we were hearing that there’s a skills gap,” says Lina Di Genova, associate director of assessment, learning and evaluation at McGill. “Really there is a communications gap.”

Since 2014, with growing support from student organizations, McGill has expanded the scope of the CCR and registered about half of undergraduates.

Kimberly Elias, project manager of student life at the University of Toronto, who was instrumental in that school’s CCR rollout in 2013, says the document encourages students to consider their education in a different way.

“Traditionally, our academic transcripts don’t say a whole lot because they focus on the grade,” she says. “So students see their education as an accumulation of hard work that goes into a grade. I think the value of the CCR is in broadening the narrative of what the purpose of education is.”

Over the past four years, U of T has gradually added CCR-eligible activities, such as work-study employment and other campus-related experiences, including those who work while in school.

Last year, about 9,000 students (about 10 per cent of undergraduates at U of T’s three campuses) were registered for the CCR—double the participation level four years ago. With expanding demand, the university has approved a fivefold increase in qualifying CCR experiences.

“For me it is less about the numbers and more about increasing the value of the CCR experiences,” says Elias. “The real value of the CCR is using it as a learning tool so students can reflect on their experiences: ‘I was an athlete. I developed teamwork, communication and leadership. And this is why you should hire me in a bank.’ ”

Meanwhile, the CCR has begun to pique the interest of employers and recruiters. “[CCR] is still a new movement, but I think it’s an important movement,” says Bruce MacEachern, an Ottawa-based partner of Summit Search Group, a national executive recruiter firm.

He says new graduates typically lack work experience so must rely on less formal activities, such as membership on a sports team or volunteer work, to describe their value to a prospective employer. “A lot of students don’t think past graduation,” he says. “They think, ‘I will graduate and get a job,’ but they don’t think, ‘How do I get that job?’

“A program like [CCR] helps them start to network,” he adds. “Whether it is sports, volunteering or working [while in school], they are creating opportunities without even knowing it.”

Matthew McKean, director of the research program for the Centre for Skills and Post-Secondary Education at the Conference Board of Canada, sees value in graduates using the CCR to describe their competencies to an employer. “It helps improve the confidence of an employer that the person has taken initiatives to develop those harder-to-develop skills.” he says.

Last year, U of T chemical engineering student Oluwatobi Edun used his CCR to land a one-year industry internship during his undergraduate degree. He has been a member, and captain, of an intramural soccer team at U of T and enrolled in university workshops on leadership, teamwork and giving (and taking) feedback. This year, he is a student residence don at New College. “Without the CCR, I would not have been able to express clearly what the [outside-the-classroom] learning was about,” he says. “I was able to explain the impact I had on my group and team and the impact on me and how it connected to the [internship] role.”

During his internship interview, he says the company’s recruiters “were a little surprised I could explain all those experiences so well and how they connected to the position.”

As the CCR gains traction, university officials are working with student organizations, faculty and others to expand what qualifies for the non-academic transcript.

This fall, with about half of undergraduates now registered for the CCR, McGill introduced Skills21, a series of workshops for undergraduates to develop expertise in leadership, well-being and citizenship that equip them for life after graduation. For graduate students, the university is introducing an Individual Development Plan (mandatory for Ph.D. candidates next year and optional for those pursuing a master’s) that includes workshops on job-ready skills in writing, communication and leadership. All workshops will qualify for the CCR.

“From a McGill perspective, it’s really helpful to connect in-classroom learning with out-of-the-classroom opportunities,” says Di Genova. “What’s really exciting is that [the CCR] is an evidence-based and informed way of looking at student life on our campus in a way we never had before.”

As Patterson prepares for her final months at McGill, she reflects on the boost from her CCR. “Getting an undergraduate degree is definitely an accomplishment and something I will be proud of once I have completed it,” she says. “But I also know that is not the only thing I need to be an accomplished person in the real world.”