Harbour Hopper gets a brake from NSCC

When hilly Halifax was giving the gears to the Harbour Hopper, the Nova Scotia Community College helped solve the company's problem 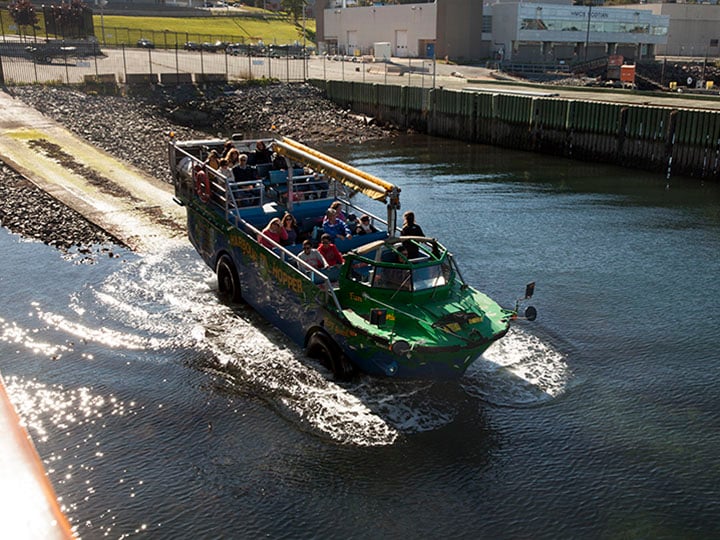 Jeff Farwell had an expensive problem.

His company runs Halifax’s amphibious vehicles, the Harbour Hoppers. They’re popular, taking 60,000 tourists a year around the city, on land and in the water.

But part of their appeal is that they’re retrofitted Vietnam-era troop carriers. And, thanks to the downtown’s hilly streets, they were burning through their brake pads—their hard-to-find, expensive brake pads.

The company had to replace the pads every couple of weeks, which resulted in more down time for the vehicles, costing the company hundreds of thousands of dollars.

Farwell, the co-owner of the company, needed an answer. He found funding for his search through the government’s Productivity and Innovation Voucher Program, and approached Nova Scotia Community College (NSCC) to ask if they could help.

“Students and faculty got together to look at the issue, and to find solutions that could be modified for these vehicles,” says Wayne St-Amour, the NSCC’s executive director of innovation and entrepreneurship.

David Giles, a transportation instructor at NSCC, took on the task as a technical adviser. “I didn’t look at the braking system; I looked at the problem,” he says. “In the end, we didn’t even touch their brakes.”

The company wanted the solution to be modified from off-the-shelf options, so as to limit costs and potential complications. Giles decided to turn to electronic braking systems, the kind found on large-haul trucks in mountainous regions.

An electromagnetic drive-line retarder from Telma was his final choice. Costing about $10,000, it slows the vehicles, limiting wear on the brakes. And, unlike the brakes, the retarders will last more than 30 years, he says. “They’ll outlast the Harbour Hoppers.”

Once they knew what the braking system would look like, they moved on to the next problem: how to mount it to the vehicles. “Unlike a car, you can’t just drill a hole in the structure,” says St-Amour.

Mechanical engineering faculty and students designed a special bracket to hold it in place on the hull of the ships. The bracket was then created by ABCO Industries of Lunenburg, N.S.

The solution helped to preserve the brakes, and it also made the vehicles easier to control. “It was an instant hit; the drivers would try to get in early to grab the machine that had the retarder on it,” says Giles.

The company is now going to install the system on all four Hoppers. And they’re working with the NSCC on a new project: making the fleet more fuel-efficient by creating a hybrid electric drivetrain for them. They’re also looking at building a brand-new Harbour Hopper prototype in partnership with the school.

Working on such a complex project was a great opportunity for the students, says St-Amour. “They get a chance to solve a real-world problem. That gives them a chance to get a deeper learning experience and, at the same time, they’re shoulder-to-shoulder with industry, [making contacts],” he says.

Giles agrees. “The students were seeing something totally outside the box. They’re looking at technology that’s so dated, and really giving it new life,” he says. “[They feel proud] in that they’ve taken something that people say can’t be done, found the solution, then seen it executed.”