Helping French students get a jump on trades training 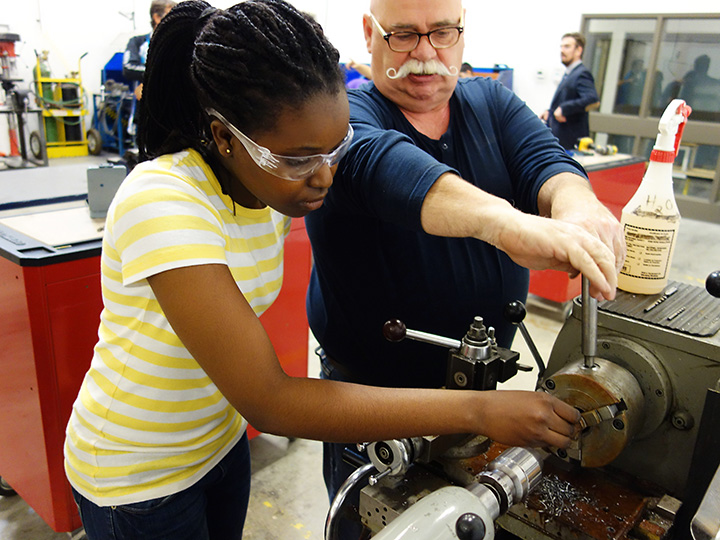 Under supervision of a MITT instructor, a student operates a metal lathe  (Colin Fenby)

You’ve always needed your head to work with your hands. But having a voice helps, too.

That’s where French-speaking students in Manitoba have long been at a disadvantage, with trades education in the province an English-only affair. The Division scolaire franco-manitobaine (DSFM), the only school board in the province to offer full-time education in French and encompassing just 23 schools and 5,000 students, was too small and spread out to offer specialized shop classes. And there were no French post-secondary trade education options west of the Ontario border, until an innovative new partnership with the Manitoba Institute of Trades and Technology (MITT) forged a path for a generation of homegrown charpentiers, soudeurs, and électriciens.

Over the past two academic years, francophone Grade 9 and 10 students have been able to sign up to spend one day a week at the Winnipeg college, getting an introduction to “hands-on” jobs in their native language. Starting next fall, the program will expand to Grades 11 and 12, offering “red seal,” Level 1 trade certificates—the first step to journeyman status—to go along with a high school diploma.

“It’s the equivalent of a year of post-secondary study, and it won’t cost them a thing,” explains Chantal Simard, MITT’s senior French technical education consultant. “They can go right out and start work as an apprentice and head toward the next level.”

For the lower grades, the DSFM has been teaching the theory—a total of 68 hours in the classroom—and the college has been offering 42 hours of practical experience with the machines and tools. The certificate program will be more intensive, with students splitting their academic year—one full semester in high school and the other at MITT. “Our students will be able to work in both languages,” says Simard. “It will open up opportunities.” It will also save families at least a year’s worth of tuition, a $4,000-$6,000 windfall, depending on the program.

Grade 9 students Viviane De Pauw and Dominic Bosc have been making regular Friday trips to the college from their school in Notre-Dame-de-Lourdes, 130 km southeast of Winnipeg. It’s 1½ hours each way on a school bus, but the experience has been worth it, says 14-year-old De Pauw. “I’ve never really worked with my hands before,” she said, speaking in French. “This helps you figure out what you like and you don’t like, as well as the vocabulary.” She’s been making flowers in a metalworking class. Bosc, who just turned 15 and has ambitions to become an architect, has been concentrating on carpentry. “I’m learning how to measure and cut, and how to build, and read plans. It’s a lot of fun,” he says. “And it’s going to help me a lot going forward.”

Michael De Pauw, Viviane’s father, is pleased to see industrial arts become an option for the kids in Notre-Dame-de-Lourdes, a community of 700, with only 90 students at the local high school. As a farmer, he knows their value first-hand. “I’ve got to be a jack-of-all-trades, from carpentry to welding,” he says. “It’s a big advantage to know these things. With these kids being able to work in two languages, they’ll be much more employable.”

MITT, known as the Winnipeg Technical College until 2014, when it extended its mandate, is in the midst of a major expansion, with plans to build a residence so it can offer students from even farther flung francophone and Aboriginal communities the opportunity to stay and study in Winnipeg. There are hopes the program will become a model that can be exported to help French-speaking communities in the rest of the Western provinces.

Gabriel Gosselin, a spokesman for the DSFM, says the cultural value of such a program shouldn’t be overlooked. Living in a province where English is the overwhelming majority makes it difficult to sustain the French language, and words and terminology, especially technical ones, tend to be overtaken by “Franglais.” (“Le tape,” for a measuring tape, instead of the proper “un gallon à mesurer,” is one example.)

And trades skills, which open options for self-employment as well as salaried jobs, could represent something even bigger for shrinking francophone towns and villages: a brighter future. “It gives our communities the capacity to hold onto their young people,” says Gosselin. “And that’s huge.”