As Canada's 150th birthday beckons, the heritage trades get hot 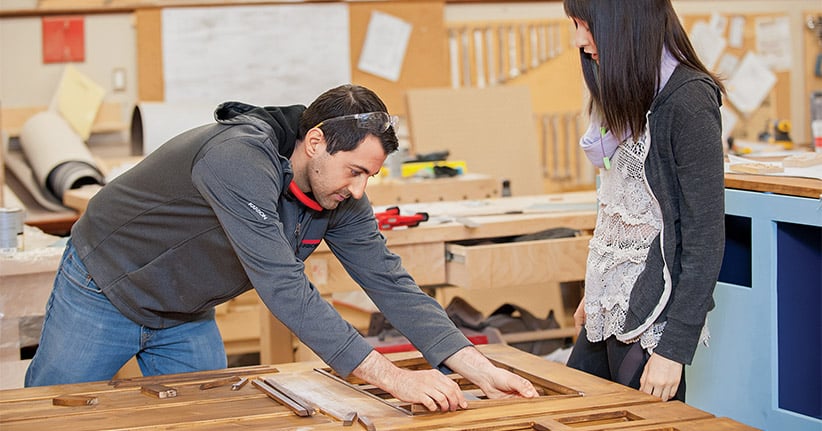 Some college students are launching apps and social-media companies, but others are taking a step back in time and learning to work a forge, repair antique wood or carve limestone. Heritage trades preserve our legacy, from Quebec City’s cathedral, built by French stonemasons in 1647, to Nova Scotia’s wooden Fort Edward blockhouse, built by the English in 1750. As Canada prepares to celebrate 150 years of Confederation, we rely on these trades to refurbish, retrofit and repair our history.

Last year, Josh Silver had his students replace an aging door. They researched photography archives and blueprints of old buildings to make a sketch, and used handmade tools to create a door with the same wood grain, size and style as the original. “The students really rise to the occasion,” says Silver, an instructor at Holland College’s Charlottetown campus. “They’re really proud of what they do.” The 45-year-old grew up in Ohio, where he witnessed craftsmanship flourish as a push-back to rapid industrialization. Since moving to Canada 12 years ago, he’s seen the field expand.

Last year’s class of 16 reached gender parity, with students ranging from artsy high-school grads to former lawyers starting a new career in their fifties. Most years there is a waiting list.

Students spend about 70 per cent of class time working with their hands. First they create a wooden mallet, which is weighted and shaped for their own hand. They sculpt their own chisel and mill lumber into a smooth plane. Courses also teach computer modelling, communication skills and the technological wherewithal to read and make blueprints.

Students graduate with the first of four years needed for the nationally designated trade. They earn the rest through heritage apprenticeships and doing routine tasks in a carpentry firm.

Jacob Fritz, 31, completed the program last year after he and his Canadian girlfriend worked on organic farms. Fritz wanted to work with his hands, and now builds cabinets back in his home state of Vermont. “Everything I’ve learned has been super relevant,” says Fritz, who appreciated learning how to improve a building’s energy efficiency while preserving its historical character. “It’s going into older houses and being able to identify the really overwhelming waste, and fixing that.”

In Prince Edward Island, a heritage carpenter’s hourly rate starts at $15, compared with $12 for a standard carpenter. It rises to $40 an hour for a veteran; wages can almost double in high-demand places like Alberta.

Silver says his graduates can always fall back into standard carpentry if heritage jobs are thin. “We have a significant void in the trades for Canada and North America, where job security and wages are really positive.”

When reached by Maclean’s, heritage mason Darrin MacDonald was with students, completing a week-long project that drew some unexpected visitors. “We had a few polar bears come by, which was really cool to see up close,” MacDonald says from Churchill, Man.

As co-ordinator for Algonquin College’s heritage masonry program on the Perth, Ont., campus, MacDonald and some of his students were helping Parks Canada restore the 300-year-old Cape Merry battery, while watching beluga whales from the site at the historic Prince of Wales Fort. “This is a job where you can travel the world and . . . be nomadic,” says MacDonald, who has worked in Europe and on the Parliament buildings in Ottawa.

At Algonquin’s three-semester program, students spend half their time at a desk learning masonry fundamentals like geometry and mortar science. By the end, they’re spending two-thirds of their time in the field. MacDonald says his students quickly get into shape if they don’t start school physically fit. “A lot is mechanized, but sometimes you really have some heavy stones.”

Heritage masons have seen an onslaught of projects for Canada’s 150th anniversary next year, according to Public Services and Procurement Canada spokesperson Nicolas Boucher. “Hundreds of heritage trade workers, including apprentices, are involved in the rehabilitation of the Parliamentary precinct. They include copper roofers, metalworkers, masons, millwrights, tile setters and window workers.”

Meanwhile, MacDonald says many old Ontario and Quebec buildings are constantly under restoration. “Most graduates will have a job out of school,” he says. “We’re connected with the employers.” He pegs union jobs as starting at $16 per hour and around $50 for experts, while non-union jobs start out paying $15 hourly and jump to $18 within a few years.

Just weeks before Evan Murkar finished school in August, he’d never been more satisfied in his work. He particularly enjoyed working on a barrel vault, a complex, arched doorway that included three different types of brick and some glass. Murkar left a “dead-end job” in roofing to help keep Canada’s heritage intact.  “It’s fulfilling work, and you’re doing a good thing for the country.” 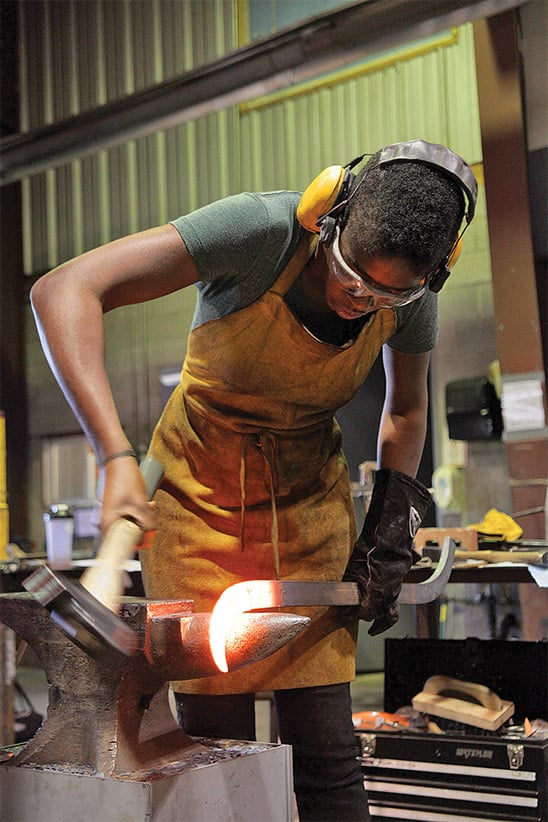 For Kevin Kratz, Netflix and binge-watching has brought about a resurgence of one of the oldest jobs. “Maybe it’s because of Game of Thrones, but blacksmithing is a lot more in the public eye now,” says Kratz, an instructor at Selkirk College’s Nelson, B.C., campus. “You might not have touched a hammer before; you don’t know how to draw out the steel. But once you have the skills, you can push metal around like Plasticine.” Beyond ornamental housewares, students focus on making moulds and industrial tools.

In Ontario, Fleming College’s blacksmithing program has a waiting list for both the fall and winter sessions. Sandra Dupret, dean of the college’s Haliburton School of the Arts, says instructors demonstrate rather than lecture. “When I went to school, art history was looking at 300 slides. You’re not going to do that here.”

Both colleges offer an intensive, four-month program with mostly hands-on courses, and each allows students to use the forge oven after class hours. Scott McKay, who owns and operates Strong Arm Forge just outside of London, Ont., came to Fleming with a background in welding and steel fabricating, but wanted to branch out into art. His portfolio includes abstract public-art statues, lifelike bird sculptures and quirky mantelpieces. “One of the traits, if you’re considering this career, is to have another career,” he laughs.

McKay says blacksmithing programs teach the main skills to be a welder-fitter, a machinist or a mechanic—which are all in demand. “When I sell a piece for three, five or 10 thousand dollars, it’s great. But it doesn’t happen every week, so you have to keep your shop diverse.”