Honouring missing Indigenous women, one doll at a time

Her mother was nearly a statistic. So Alkiie-Babe Froman is educating her school about Canada's missing and murdered Indigenous women 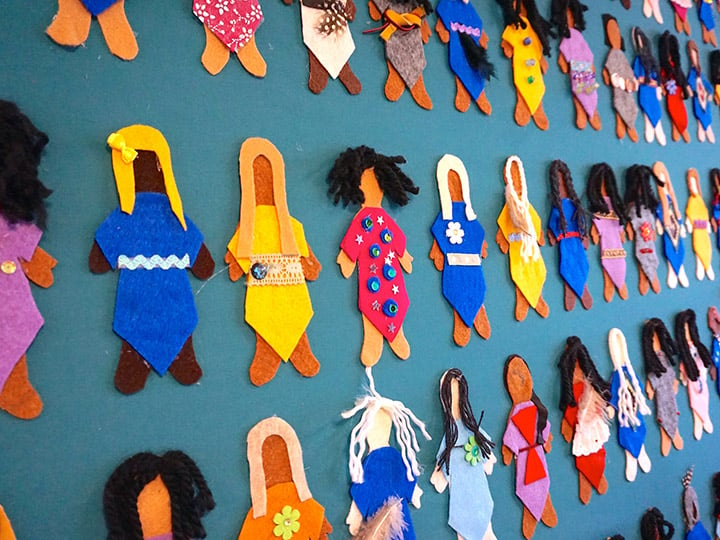 “Our story isn’t about a white picket fence with mommy and daddy waiting by the front door,” says Alkiie-Babe Froman, speaking about her and her younger sister’s childhood. “Our mother was a prostitute. That’s how she made her livelihood.” The 24-year-old Niagara College student sounds sympathetic, even grateful. “She tried really, really hard, and I learned great lessons from my birth mother.” One of those lessons was always to trust your gut.

Adopted by her great-aunt and uncle when she was barely a year old, Froman grew up on the Six Nations Reserve near Brantford, Ont.; her sister was raised in foster care. Their mother died in 2013, but Froman connected with her shortly before, hearing stories of her mother’s life—in particular, a night when she and a group of women met a client at his Port Coquitlam farm. Some doors didn’t have handles; something just wasn’t right. Her mother couldn’t put her finger on why, exactly, but she hitchhiked back into town alone. “She never saw those women again,” says Froman, “and that man was Robert Pickton.”

Families, mostly Indigenous, of missing women whose DNA was found on Pickton’s farm will never know what happened. The “what if” for Froman’s family was terrifying. “What if she had stayed?” She likely would have joined the growing list of 1,200 Indigenous women who were murdered or went missing in the past 30 years. The Faceless Dolls workshop organized by Froman, a second-year business student, was designed to bring awareness to this personal issue.

On Oct. 9, with felt pieces, glue, yarn and beads from a dollar store, Froman set up tables outside the cafeteria at the Niagara-on-the-Lake campus. For three hours, she called out to staff and students, encouraging them to make a doll. Each palm-sized replica is “a representation of a fallen sister, mother, grandmother, aunt,” says Froman, who cut out the bodies, leaving the “makers” to choose embellishments—hair, bright skirts, dresses and blouses. “We just bedazzled them all with beads and sequins!” says Froman.

When she packed up, there were more than 50 dolls, and Froman had spoken to hundreds of people, many international students. “Non-Natives don’t know about this,” she says. “That’s okay, because that’s what we’re here for: to learn and to teach. I just want to teach people about women going missing.”

This is one example of what the college considers “active citizenship” and “it’s really important to us,” says Rick Anderson, director of student services. The Centre for Student Engagement and Leadership, launched in 2012, helps students find volunteering and professional development for community involvement. Those experiences “are formally recognized as part of the student’s academic report,” says Anderson, through a co-curricular record.

The centre collaborates with faculty and all departments, including the First Nations, Metis and Inuit Services (FNMIS), where Froman was working when she developed the Faceless Dolls workshop: “My boss said, ‘If you come up with an idea, we’ll help make it happen.’ ”

While the school’s civic focus cuts across the 9,000-strong student population, there are about 200 Aboriginal students, 25 per cent of which are from the Six Nations Reserve.

Another project looking at the issue of murdered Aboriginal women, the documentary Our Sisters in Spirit, was incubated at the college by a third-year student and launched with the help of the FNMIS, as well.

When she enrolled, Froman’s post-graduation plan was to open a restaurant, “but now I think that’s too small,” she says. Her new goal is to transfer to the college’s international commerce and global development program. “I want to work for the United Nations, representing Native people.”

She’s holding a second Faceless Dolls workshop at the college’s Welland campus later this year. The mission is to create 1,200 dolls to display at the Native Women’s Association of Canada—and Froman will keep organizing workshops until she hits her target.