A community college attracts 3,000 people to northern New Brunswick in the dead of winter 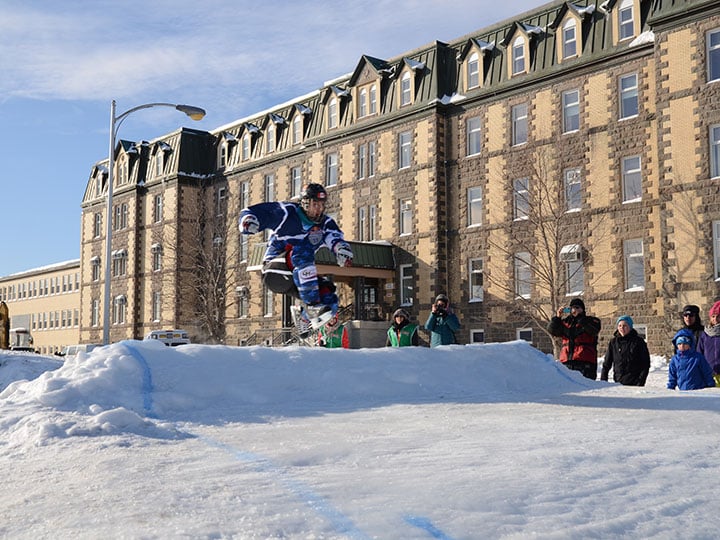 With a little co-operation from Mother Nature, and the dedicated efforts of student and employee volunteers from the Collège communautaire du Nouveau-Brunswick who built the event from the ground up, the small town of Bathurst—population 12,000—put on a show when it hosted the Xtreme CCNB Race on Valentine’s Day.

The independent ice racing event, which drew more than 3,000 spectators,  is now on the Red Bull Riders Cup circuit. New Brunswick’s first-ever downhill ice-cross event drew a huge crowd to an icy hill on a snowy -30° C night to watch more than 100 competitors from New Brunswick, Ontario, Quebec, Nova Scotia and the United States skate down an icy run like mad hockey players on a tear.

Alex Mercier of New Richmond, Que., won the men’s competition, while Alexis Jackson of Vermont won the women’s, but it was about so much more than the championship.

“It really got the community together. It’s definitely not something you see in Bathurst every day,” says Jérôme Bérubé, who was in his second year of business administration at the time, and is now in his first year at the Université Laval. Bérubé helped to organize the race, and competed himself.

The race was the brainchild of Bruno Richard, CCNB’s communications director, who also happens to be a downhill ice-cross athlete with an international record. CCNB’s Bathurst campus is on a hill (called, naturally, College Hill) visible to the whole town. Students from different programs would build and race toboggans there during the college’s annual winter carnival. Richard suggested to principal Paolo Fongemie that the hill would make a perfect venue for an amateur downhill ice race.

Fongemie took to the idea, and the two worked to get students and faculty involved to showcase the academic programs at CCNB, a primarily francophone institution that offers diploma, certificate, degree, trades and apprenticeship, and educational upgrading programs. “I love this sport. To me, it’s the greatest sport in the world,” says Richard. “But the idea of the race was mainly to give a spotlight to our programs . . . It was great for the economy of the region, definitely a win-win situation.”

The entire event was a team effort: Building engineering technology students helped to design the serpentine 350-m track by doing a topographic survey of the land. Employees from the city of Bathurst helped staff and students from the CCNB to build up the ice. Student carpenters and welders built the track’s obstacles, such as a steep jump and triangle jump, as well as the starting gates. Meanwhile, CNC machining and metal fabrication students made the awards, while business administration students handled promotion and managed the event.

Richard and Fongemie hope to get more of the CCNB’s programs participating in the 2016 race. Thanks to the involvement of Red Bull and international athletes, next year’s track will have to be more sophisticated. Among the programs joining in 2016 are information technology students, who may handle outdoor WiFi and develop an app to track the scores, and environmental technology students, who will handle waste management.

“Bathurst needed something new, something big, and I wanted to be part of it,” says Joey St-Amand, a heavy equipment mechanics teacher who helped to build the track. “We had a great team of student and teacher volunteers, and it all comes down to that.”