How to break the vicious cycle of hazing

Can universities crack down on disgusting initiation rituals if students don't want to stop? 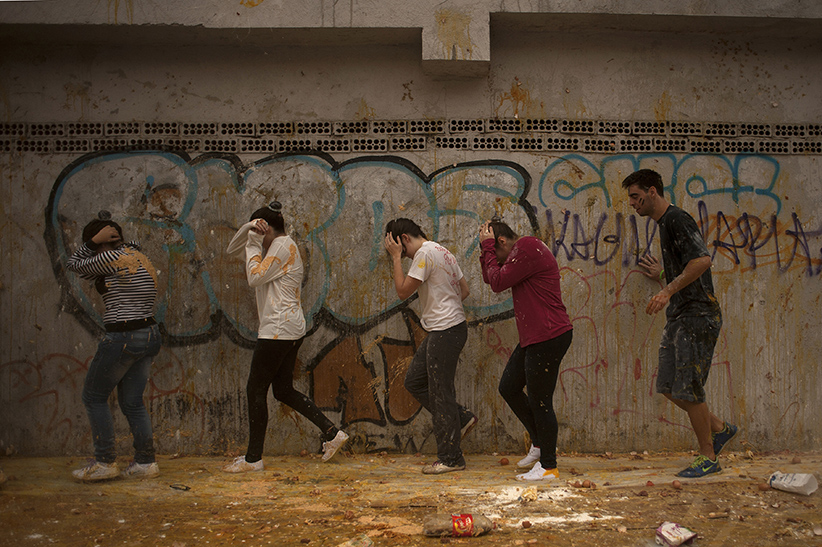 Medical students throw food at freshers of the Faculty of Medicine during a hazing at the University of Granada, in Granada on October 17, 2013. (Jorge Guerrero/AFP/Getty Images)

This article was originally published in March, 2017

When students get hazed, they endure the treatment under an unwritten contract that they themselves will one day be hazers. Perhaps they, too, will threaten rookies with paddles, make them eat onion-flavoured vomit, or think up their own games with horrific creativity.

However, as universities, coaches and advocates try to phase out hazing, the hope is that a generation of students who were hazed themselves will get past the seeming unfairness of not paying the barbarianism forward. “It’s called going across a subliminal space,” says Hank Nuwer, an anti-hazing advocate in the United States. “By doing it to someone else, it gives it legitimacy. Now they have to say, ‘It wasn’t worth it. It wasn’t the honour I thought it was.’ They’ve been deprived of this [reciprocity], but it has to be done.”

This disconnect is one of the toughest barriers in the decades-long campaign to stopping hazing—an effort given new urgency by the investigation of basketball players at McGill University, which back-tracked on its claim of being a “hazing-free environment.” Although students might learn how the ritual is dangerous and worsens team performance, the previously-hazed people—who may have sacrificed their dignity during initiation—will unavoidably get an unfair deal. “Maybe some of them lost their eligibility,” says Nuwer. “Maybe some of them got expelled. Now we’ve eliminated it and it seems, ‘what I went through that I was so proud of was a foolish and ridiculous and potentially dangerous act.’”

Schools are still far from eliminating hazing. Although McGill declares itself a “hazing-free environment” on its website, its deputy provost admitted it does not uphold the promise. The concession came in an interview with The Globe and Mail regarding a recent report on the hazing of an 18-year-old basketball player in 2015. His head was pillow-cased, his hands duct-taped to a bottle of vodka, and his experience happened to mark the 10th anniversary of a notorious incident in which a McGill football rookie was forced onto hands and knees and assaulted with a broomstick.

McGill has become just one hazing crime zone. In universities across the country, not only senior athletes but also senior students in programs from nursing to engineering have initiated newcomers with gagging, hair removal and other acts approaching the cruelty of the 2005 attack on the McGill football player.

While American schools tend to treat each incident as one-off misdemeanours or crimes, Canadians have come to recognize hazing as an epidemic. Mike Havey, athletic director at the University of Windsor, says the school holds mandatory anti-hazing workshops to convince seniors not to perpetuate their own suffering. “I think that’s the cycle we have to try to break,” says Havey. “Just because it happened to you doesn’t make it right.” Given that hazing can make teams perform worse, Havey says the workshops try to “appeal to their competitiveness,” rather than present new hazing restrictions as “a loss of opportunity to get revenge.”

Vengeance is a motivating force for many hazers. “It vindicates them from being hazed,” says Jay Johnson, an associate professor of kinesiology at the University of Manitoba who has studied hazing among more than 1,000 students. “You’re going to have people who were hazed and are waiting to be the hazers, but when the change comes down or is adopted, the transition has to be made.”

The transition period must offer alternatives. Johnson has taken teams on canoe trips and high-ropes courses, in hopes that the ziplines and obstacle courses will fulfill the need for team bonding, as well as give the seniors some power over rookies. “Sport operates as a dictatorship, from the coach down,” says Johnson. “Doing something like tweaking the culture is really tough. You can involve the military aspect of it, do something where the rookies are not still in control.”

Although a coach might prevent athletes from subjugating rookies on buses or at practice, Johnson says athletes are finding new methods. “They have become pretty sophisticated at working around the system,” he says. “Young people are savvy enough to protect themselves, so people who shouldn’t hear about it don’t hear about it. That’s where we get into dangerous territory.”

Dangerous territory, in recent years, has included a frat house at the University of Alberta where students in 2010 were threatened with wooden paddles, made to eat onions, vomit, and eat those onions again. The fraternity faced little punishment except the loss of its status as a student group. Similarly, the men’s and women’s basketball teams at McGill were merely put on probation, with the terms of the probation kept confidential.

Still, the end of hazing may be on the horizon. Tristen Giusto, a first year football player at Mount Allison University in Sackville, N.B., says his welcoming involved only the encouragement to stand on a public bench and sing. He felt no pressure to do so, and he doesn’t understand why any rookie would tolerate abuse. “You’d have to be pretty stupid,” he says, “to get yourself in a situation to get hit by a paddle.”

Correction: An earlier version of this article stated that a hockey player at McGill University underwent a widely-publicized hazing incident in 2005. The athlete was a football player, not a hockey player.