Falconry, glass-blowing, and other unusual trades

They’re not regulated or even that well-known, but these jobs all require apprenticeships to learn the tricks of the trade 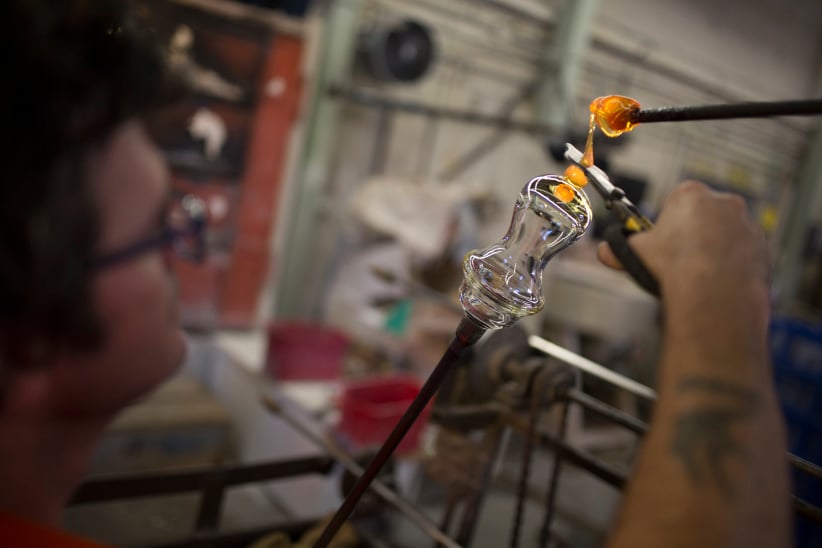 Shine on: Mastering the labour-intensive art of glass-blowing at NovaScotian Crystal in Halifax(Photograph by Nick Iwanyshyn)

A trade can be a lucrative choice when it comes to post-secondary studies. With demand high and growing, electricians, carpenters, welders and those in the construction sector are known to have lasting job prospects. But there are lesser-known, more artistic options in the trades that also bring beneﬁts.

Here are four unconventional trades you may not have considered.

Three years ago, Luke Peters, 23, was washing cars to try to make enough money to go to Nova Scotia Community College (NSCC). He wanted to study a trade, but he had no idea which one. In the end, he never made it to NSCC, but he is in a trade—he’s an apprentice at Halifax’s NovaScotian Crystal, the only hand-blown, hand-cut crystal makers in Canada. “It’s a niche trade, and there are only a few people in Canada who are able to say they can do this,” says Peters.

That—at least in part—is because it’s tough work. Glass-blowers take small batches of molten crystal and, using a long metal rod, roll it into a basic shape (usually round, square or oblong). With a blowpipe or tube, they then use their own breath to manipulate the shape, converting it into various objects, like the bowl of a wine glass. From there, additional pieces are added to the item—stems for glasses, for example—and it’s put into a kiln to cool. Once cooled, items are taken to the ﬁnishing department where edges are smoothed out.

NovaScotian Crystal started taking apprentices within months of opening nearly 20 years ago. So far, six people have completed the program and are craftsmen.

Most apprentices start as entry-level labourers where, among other things, they straighten the cooled pieces and smooth out edges. Eventually, they can become cutters, who work patterns into the glass, or glass-blowers, who create products like vases, candle holders and Christmas ornaments. “The production manager, who is responsible for training, will watch them to see how they’re doing and see if they have an aptitude for working with ﬁne details [like having good hand-eye coordination],” says Christine Vaughan, manager of customer experience. If they seem more suited for glass-blowing because of an afﬁnity for ﬁne details, the apprentice will start doing basic tasks in that area, such as knocking off excess glass or reﬁlling the kiln.

Peters enjoys the work, but admits he didn’t realize how much precision and effort goes into each piece. For example, a wine glass is a three-step process, where the bowl of the glass is made ﬁrst, followed by the stem and then the foot. “I was really surprised at how easy they [master craftsmen] make it look.”

At NovaScotian Crystal, it takes ﬁve to seven years to become a craftsman and another ﬁve to 10 years to become a master craftsman. For regular glass-blowing, there are no provincial standards, so the time frame can vary from company to company and worker to worker, depending on their progress. “Within the [glass-blowing] team there are different disciplines,” says Vaughan. “One guy might blow light-heavy, so that might be what he specializes in [smaller items and smaller gathers of molten crystal]; the next guy may be a heavy blower, so he works with larger pieces and larger gathers of molten crystal.”

While he still has a few years to go in his apprenticeship, Peters would like to specialize in making the stems of the glasses. “There just seems to be a lot to ﬁgure out there when you’re creating a stem,” he says. “It’s just another challenge I’d like to do.” 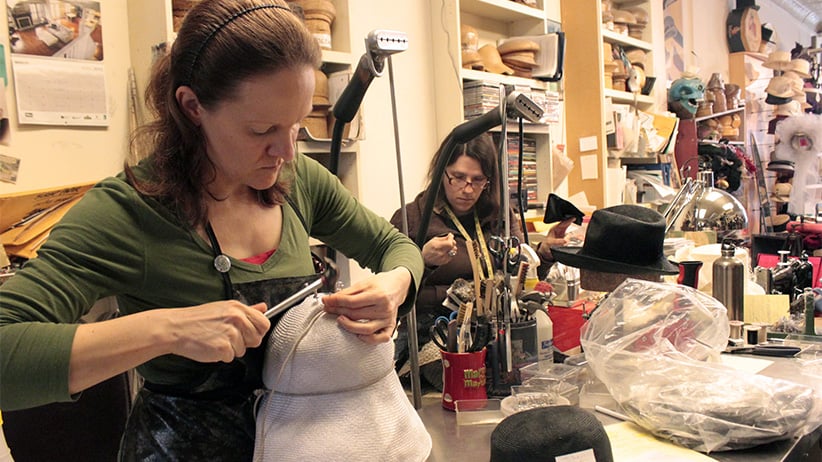 Heads up: There’s still a market for handmade hats, a skill fashion students can master at Lilliput Hats

Toronto milliner Lilliput Hats has been taking on apprentices for about ﬁve years and usually takes on one or two a year. Elizabeth Swales, 23, was one of them. “When I think about memorable experiences from my time working at Lilliput, I don’t necessarily think of the components of individual pieces right away, but more the situation a piece was designed for or the story behind the pieces,” says Swales, who apprenticed at the shop last year and now works there full-time.

Apprentices shadow Lilliput employees and learn by doing. They learn about the materials, and how to build a hat from start to ﬁnish. If it’s a custom order, ﬁrst there is a consultation between the milliner and the customer, which takes between an hour and 2½ hours. Then the hat is built, which takes between one and four hours, including drying time.

Hats are built using hat blocks or wooden blocks carved into hat shapes. The material is then stretched over the blocks to make a particular style of hat, but often these blocks are one size, causing issues. “We often need to modify the block we are using, stretch the material after it’s been blocked or make it smaller,” says Lilliput’s owner, Karyn Gingras. “We often have to build up blocks because they are way too small.” Once the hat is built, other parts like the embellishments are added, which takes another two to three hours.

While Swales didn’t work on the Downie hats, it’s the idea of working closely with customers that drew her to the trade. She had been studying fashion at Ryerson University, where millinery isn’t a focus, but she was assigned to interview someone at Lilliput for an introduction to fashion class. After seeing the shop, she knew it was where she wanted to be. “The difference it can make to people to have something beautiful and personal like that can be really meaningful.” 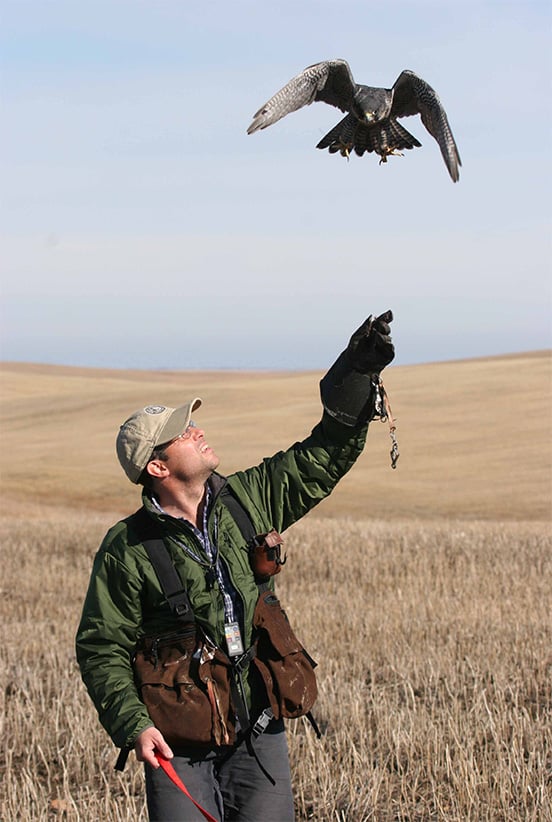 Bird in the hand: Falconer training is time-consuming, and must be tailored to accommodate the bird’s personality (Mark Adam)

A childhood interest in falconry has turned into a full-time pursuit for one former apprentice of the Ontario Hawking Club. “I read a book when I was child called Gifts of an Eagle, and it always stuck with me,” says Mark Perkin, 52, of Waterloo, Ont., who ﬁnished the apprenticeship program last year.

Falconers train birds of prey, usually falcons or hawks, to hunt wild game in speciﬁc environments. Today, most falconers learn this hunting trade as a hobby, but there are some work opportunities, speciﬁcally at wildlife organizations leading educational sessions for the public, and at airports and on farms conducting bird abatement, where falconers and their birds stop smaller birds from interfering with crops or planes.

Standards vary by province, but in Ontario, this unpaid apprenticeship lasts two hunting seasons, or 15 months that include two Octobers. Training to be a falconer is time-consuming, with most apprentices spending ﬁve to 10 hours a week in training, on top of general care for the bird at home.

Perkin’s ﬁrst bird was a red-tailed hawk named Ginger. While he and Ginger have passed their apprenticeship, he didn’t realize how much work went into learning falconry. “It is deﬁnitely a job,” says Perkin. “You have to be passionate about it.”

To become an apprentice, you need a small-game hunting licence and to ﬁnd your own sponsor, or someone who has been practising falconry for at least ﬁve years. Apprentices also need to ﬁnd their own bird. They can get one from a breeder (prices can exceed $2,500) or apply for a permit to trap their own with the sponsor’s help. When searching for a bird, whether it’s bred in captivity or in the wild, an apprentice should be looking for a young bird in the late summer or early fall, the time it would naturally be learning how to hunt.

In Canada, if an apprentice gets a permit to trap a wild bird, it is usually for a red-tailed hawk, because of what Perkin calls their “hearty” nature. Unlike most other birds, which need to eat every day, red-tails have good survival capabilities and can go for a few days with little to no food. “If you do make a mistake in over- or underfeeding it, it’s able to recover,” he says.

The apprenticeship gives novice falconers more insight into how falconry works, while also helping them learn how to train themselves and their birds. “I would rush it [the training process], and my sponsor, Dion [Thomson], would have to tell me to take my time,” says Perkin. If an apprentice introduces a task too early in the training, they can get “footed.” This is where a bird grabs and locks on to a hand, arm or wrist with its talons. “I learned the hard way, with a lot of talons through the hands,” says Perkin.

Sometimes training has to be adapted to accommodate the bird’s personality. Perkin recalls the time he realized Ginger wasn’t interested in hunting rabbits, which is what his sponsor wanted her to do. “Ginger is good on bunnies, but after ﬁve or 10 minutes of not ﬁnding anything, she gets bored and she’ll start looking for squirrels in trees, so we just decided to make a squirrel hawk of her.” 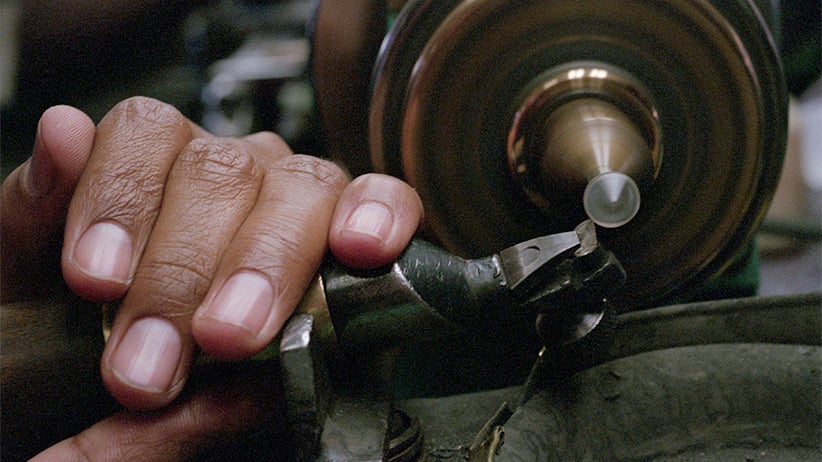 Diamond-cutters take rough stones and alter them to make shapes, referred to in the industry as cuts, such as the round, princess, emerald or square cut. It’s exacting work, requiring a steady hand and an eye for detail—not to mention a clean criminal record.

The economy can have a deep impact on the industry (luxury goods aren’t as popular during tough times), but the job prospects are promising. According to National Resources Canada, there are full-time diamond-cutting and -polishing factories in Yellowknife, N.W.T.; Vancouver; Prince Albert, B.C.; and Sudbury, Ont., and some work being done in Winnipeg, Toronto and Montreal.

Before you can call yourself a diamond-cutter, though, you need to apprentice. Some private companies offer this hands-on training. For instance, since opening in 2009, Prince Albert-based Embee Diamonds has trained about 10 cutters. Now the company is looking to train apprentices through its Canadian Diamond Academy, a program it is trying to get Red Seal-certiﬁed.

Red Seal sets standards for certain trades in Canada. Those trades are regulated by the Provincial and Territorial Apprenticeships Act and can include rules for training. This means that Embee’s program could help set the common standard for diamond-cutting apprenticeships in Canada, if it’s approved.

Along with the criminal-record check, applicants will need a minimum Grade 12 education and a good understanding of math. And they’ll need to undergo dexterity and spatial perception tests.

Apprentices will spend the ﬁrst six months of their two-to-ﬁve-year apprenticeship on theoretical training in diamond crystallography, which, according to Evert Botha, Embee’s COO, is to ensure workers know every aspect of diamond-cutting before they pick up any tools. “A lot of programs just teach cutting and polishing, but we want them to be more well-rounded,” he says. “It’s an intensive program, but it’s also the one that will give you the most knowledge.”

From there, they move on to salaried, hands-on apprentice work. Botha says they start at $15 to $18 per hour; as their skill level and quality of work improves, an apprentice could move up to $25 to $30 per hour.

Once a worker is ﬁnished their apprenticeship, they are known as a journeyman. It takes 20 years before diamond-cutters earn the title of master.