How to play the bells on Parliament Hill 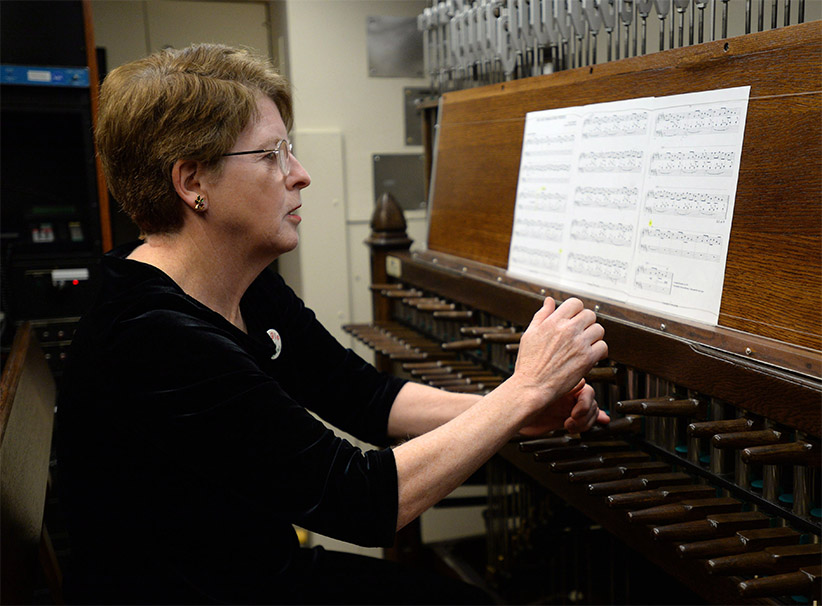 A tiny silver bell lightly jingled as Rebecca Manouchehri walked across the stage at Carleton University’s convocation last fall to receive her bachelor’s of music degree in performance studies. The bell represented her achievement: two years learning how to play the carillon, an organ-like instrument that commands the vastly larger bells that ring out from the historic Peace Tower on Parliament Hill. Indeed, she is the first graduate of the school’s brand-new certificate in carillon studies, the first of its kind in Canada.

Why, in this day and age, would a twenty-something girl be drawn to a five-centuries-old European instrument usually reserved for the towers of cathedrals and universities? When she saw it being played for the first time, Manouchehri fell completely in love. “I couldn’t believe everything that was going on, upstairs on that seventh floor of Parliament, to make that beautiful noise that we heard on the ground.”

The accomplished singer and pianist is only one of three music students in this program, a program that was a labour of love for Canada’s Dominion carillonneur, Dr. Andrea McCrady, and her two co-founders. Demand for players is not on the Top 10 job list, but a few driven individuals remain hopeful for a new generation of Canadian carillonneurs.

McCrady plays more than 230 recitals a year, dressed in her concert black. The music for carillon can range from classical to hip hop. If you’re walking by the tower in the city’s capital around noon, you may well hear the strains of Joni Mitchell or the Beatles’ Yellow Submarine. Friday afternoons from 3 p.m. to 4 p.m. in the tower are reserved for student lessons and practice. “It’s so public, yet so anonymous at the same time,” says Manouchehri. “When you’re up in the tower, they don’t see you; you just know that they are walking by.”

It took three people to make the program happen, and McCrady, clearly, was key. She got the job as Dominion carillonneur in 2008, replacing Gordon Slater, who presided over the Peace Tower for 31 years. McCrady, who studied medicine at McGill University in the ’70s, reduced her hours as a family doctor in Washington state two years earlier to study the carillon at the University of Denver, where she received her bachelor’s of music in carillon performance. When she was hired, the job description did not include a teaching role, but McCrady, passionate about training Canadian players, insisted. She began tutoring students from Ottawa U and Carleton outside of her regular work hours, and now teaches for Carleton officially.

It wasn’t until James Wright, the supervisor of performance studies for Carleton’s music program, and Dianne Parsonage, a volunteer and alumna who plays the flute, met McCrady on a tour of the Peace Tower that the idea for a carillon program was born. Before there could be a program, however, there had to be a practice instrument. Although students do get practice time in the Peace Tower, which was built in 1927 to commemorate the end of the First World War, they could not learn on the tower’s 53 bells, the largest of which weighs more than 10,000 kg.

McCrady heard about a practice carillon for sale at a private prep school in Mercersberg, Pa. Parsonage donated $10,000 to buy it. (Parsonage—who, Wright likes to joke, is the president and only member of the Friends of Carleton Music—also endowed a yearly $1,200 scholarship to the carillon program in memory of Ashley Smith, who committed suicide while incarcerated in 2007.)

Wright rented a large white van to get it, not an easy task, since the practice instrument weighs one tonne. It looks a bit like a church organ, but, instead of pulling a wire that hits a bell, as happens in the true instrument, rows of rounded wooden “keys” (which are struck with the fists) and pedals are attached to clappers that, in turn, hit metal bars. Wright and public works technician Tom Sutton took it apart and loaded the pieces into the van. The jangling produced by those keys made Wright feel as though he was driving Santa’s sleigh back to Canada. The giant practice instrument resides in a specially designed soundproof room on Carleton’s campus.

“We will now have this pool of people who can do the job of Dominion carillonneur,” said Parsonage.

In 2018, the Peace Tower will close for renovations, and the carillon will not be available for recitals. McCrady suggested that the program acquire one of only four travelling carillons in the country, so her pupils can continue playing for the public. The instrument would sit on a float and be hauled around by a truck, allowing students to play at music festivals or on the street. Wright said this is indeed “the next part of the vision.”

There are 11 carillons in Canada, ranging from the historic Hamilton cathedral to the more modern Exhibition Place carillon in Toronto. Although these are not full-time positions—the job of Dominion carillonneur is the only major position in Canada—there are possibilities for teaching the carillon full- or part-time in America and Europe, said McCrady.

Manouchehri, who is now taking a bachelor’s of science degree at Carleton, hopes to become a veterinarian near a city with a carillon, where she can moonlight as a carillonneur. Being the Dominion carillonneur is “always something to aspire to,” she says. “It’s the most prestigious job in Canada.”