How to write a Canadian musical 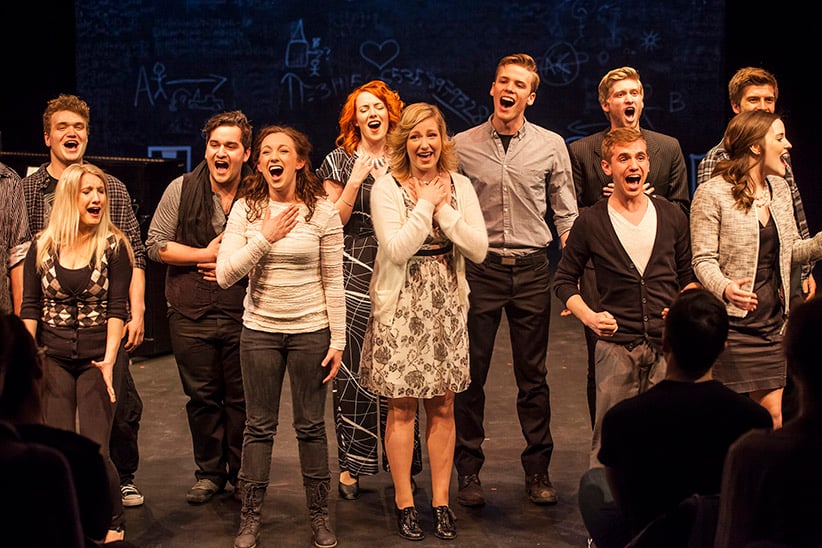 A presentation of The Theory of Relativity, Music and Lyrics by Neil Bartram and Book by Brian Hill. Developed by the Canadian Music Theatre Project. (John Jones)

When Michael Rubinoff became associate dean at Sheridan College’s department of visual and performing arts, he wanted to demonstrate that Canada is as good a place as any to create and develop musicals. He also needed a program that would fit in with the school’s new four-year bachelor’s degree in music theatre. The result was the Canadian Music Theatre Project, a workshop that has turned Oakville, Ont., into the centre of what Globe and Mail theatre critic J. Kelly Nestruck has called “a real musical moment that is emerging in Canada.”

Canadian writer Brian Hill (Broadway’s The Story of My Life), who has workshopped two musicals at Sheridan, says the developmental community is “buzzing” about the CMPT. “Michael Rubinoff has created something rare and wonderful,” he notes.

Influenced by programs like Northwestern University’s American Music Theatre Project, the CMTP selects new musicals for a five-week workshop process, culminating in a staged reading and a demo record of the songs (an essential tool in selling a show to producers). The cast is chosen from fourth-year music theatre students, but the directors and musical directors are paid professionals. The first show Hill did there with his composer-lyricist partner, Neil Bartram, The Theory of Relativity, had its first London production last year, and the CMTP’s first show, Come From Away, is making the rounds of U.S. repertory houses.

In his book Finishing the Hat, Stephen Sondheim recalls that when he wrote a musical for the Yale Repertory Theatre, the head of the program invited New York theatre critics to the opening without consulting him. But Sheridan has gained a reputation for being a safe place for writers to test their material. “We get a quiet place with a built-in infrastructure to develop a new show in its early stages,” Hill says, “and, most important, talented and eager actors ready to dive in.”

Rubinoff says the emphasis is “all on development, not on final performance,” so instead of the usual pressure to get a show into shape for opening night, the focus is simply on improving the piece—and letting the students in on the process of making it better.

What the students get out of it is the opportunity “to capitalize on the skills they have developed over the previous three years,” says Rubinoff. Most of the music theatre program’s first three years revolve around learning and performing existing work. When students are presented with a new musical, there are special challenges.

“The students cannot access cast recordings or YouTube clips of the shows in development. They do not exist,” Rubinoff says. “From a learning perspective, students must work with the writers and the creative team to meaningfully create a role.”

Composer and writer Matthew Lee Robinson, who workshopped his musical Atlantis at the CMTP, explains that “working on a new project means they have no preconceived notions as to how to inhabit these characters.”

Because all musicals are heavily rewritten during rehearsals, students also learn how to deal with the daily delivery of new material, including that which is “customized for a student,” says Rubinoff, or written to fit the skills of the actor playing the part.

This makes students full creative participants in a show—in the end, Rubinoff thinks they have more confidence in their ability to create a character from scratch. “They begin to trust their instincts and training, rather than copying what may be available online or on a cast recording.”

Robinson adds that the program is “the perfect match for their enthusiasm and hunger to create. It’s ambition meets creativity.” Which is something you just can’t get from yet another revival of Oklahoma!