Inside Nunavut Sivuniksavut, a unique post-secondary option for Inuit youth 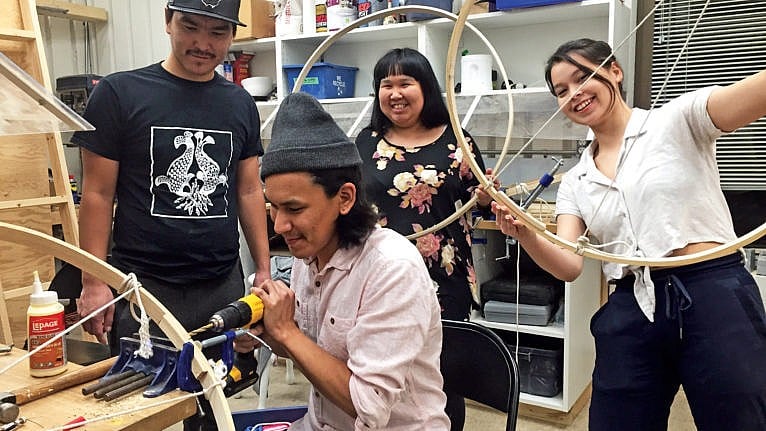 Of all the history classes Lexie Padluq took in elementary and high school, she can’t remember one that really spent time on Inuit history—her history.

“Growing up, I moved between Quebec City and a smaller community of about 400 people called Kimmirut. In my high school history class in Quebec, out of the whole textbook on Canadian history, Inuit history didn’t even take up a chapter. Even going to school in Nunavut, the history was barely taught,” she says. “The parts I did learn were extremely heavy and covered so casually. We learned about residential schools a bit and the dog-team shootings, but that was it. Then it was like, ‘Okay, let’s move on to Louis Riel.’ ”

Padluq didn’t know what she wanted to do after graduation, but she knew she needed a better understanding of her community’s history. So, when her guidance counsellor suggested she look into Nunavut Sivuniksavut (NS), a unique post-secondary option for Inuit youth headquartered in Ottawa, she decided to apply—and ended up finding not just an education, but also a community.

READ: Why the next government must take action on Inuit issues

NS is an accredited college program that provides Inuit students with an intensive curriculum devoted to their people’s history and culture. (Graduates receive certificates from Algonquin College.) The school started in 1985 as part of the Tungavik Federation of Nunavut’s negotiations with the federal government over the Nunavut Land Claims Agreement. Initially, the plan was to train fieldworkers who could act as liaisons between Inuit communities in the eastern Arctic area and the Inuit leaders who were negotiating. Graduates began telling their instructors how powerful it was to learn about Inuit history, and it became clear there was potential for something bigger. In the three decades since its inception, that’s exactly what the school has become. In December 2010, NS moved into a two-floor space in an Ottawa office building, which enabled the admission of more students. By 2018, the school had purchased three apartment complexes that function as residences. And every year, upward of 60 students attend the school.

To NS’s outgoing executive director, Morley Hanson, who joined NS in 1988, its purpose speaks to broader questions of what, and who, education is actually for. “What is an education but a preparation for life?” he says over the phone from his Ottawa office. “And how can you be prepared for that life if you don’t have a sense of the political, economic and social forces that have shaped your society, and your position in society?”

To that end, students in their first year at NS take courses in Inuit history, land claims, Inuit-government relations, contemporary Inuit issues, Inuktut, English and cultural studies. Classes don’t shy away from the hardest parts of Inuit history, and students learn about the ways Inuit have regained some of their independence and autonomy.

“Learning [Inuit history] was such a different experience at NS,” says Padluq, who just finished her second year at the school. “They always talk about it as a story, going from pre-contact, to contact with missionaries, the RCMP and the arrival of whalers and settlers and then today. It is such a different way of looking at Inuit history—and not just the lowest points. NS covers it as a curve, so although there are still a lot of issues going on in our communities, we get to see how we’re going up.”

Students also receive immersive cultural education in drum dancing, throat singing, beading, sewing parkas and mitts, and making ulus (a cutting tool traditionally used by Inuit women), sakku (harpoon heads) and qamutik (sleds), and studying language. It was this part of NS that was most affirming for Megan Hachey, who just finished her first year at the school.

“The overall program teaches you that there’s no right or wrong way to be an Inuk,” she says. “We have classmates from all across the territory. [Some] grew up very traditionally and are able to hunt and speak Inuktut very fluently. Then we have other Inuit who grew up in the city and are still trying to gain their roots. But at NS, they teach us that each and every one of us is valid and accepted and supported by our community.”

Some students opt to return for a second year at the school, as Padluq did, to take courses on community development, research methods, land claim implementation and two university-level courses—political science and Northern public administration—which are taught by Carleton University professors. And the curriculum isn’t the only culturally relevant aspect of the school. Every part of a student’s experience at NS is designed to support their emotional, social and financial needs. The school employs full-time staff to help students access counselling, academic support, housing and child care.

Nunavut Sivuniksavut graduates have gone on to enter government and education fields, as well as taking their skills to creative industries, producing and starring in movies and television shows that tell Inuit stories. Some, like Cecile Lyall, a recently elected member of the school’s board of directors and one of the few students who completed three years of the program, return to NS in leadership roles. For Lyall, being on the board is a chance to ensure that even more Inuit youth can benefit from an opportunity like this one.

“I really felt like NS has played a large part in shaping who I am, and I wanted to be a part of that for the students to come,” she says. “Because NS is growing. It’s not just a stagnant system. Much like Inuit culture, it isn’t just in one place; it’s evolving and adapting. I want to contribute to that, and see those changes.”

This article appears in print in the Maclean’s 2022 Canadian Colleges Guidebook with the headline, “‘Every one of us is accepted.’”