Inside the fight for admissions transparency at UBC

A student newspaper's years-long court battle to reveal UBC's broad-based admissions rubric is over. But whether that system works remains unclear. 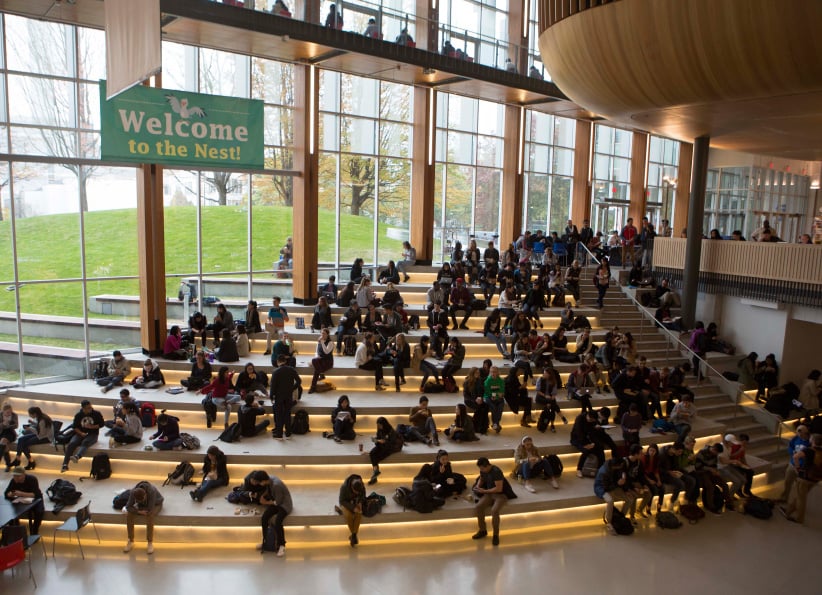 Students in the Nest at UBC in Vancouver. (Photograph by Della Rollins)

In the spring of 2013, Geoff Lister, then a student journalist and editor at The Ubyssey newspaper, started digging into a new admissions system at the University of British Columbia. The year before, the school became the largest Canadian university to screen all undergrad applicants using broad-based admissions, a holistic model that supplements grades with four to six short essay questions, gauging the applicant’s life skills from problem-solving to leadership.

Questions abounded. Who was reading the student profiles? How much was it costing the school? And how were the responses assessed? That last question gnawed at Lister. UBC’s admissions director declined to provide a rubric to Lister, whose story in The Ubyssey noted that “most of the process remains opaque.” Shortly after, Lister asked for the rubrics from three faculties in a freedom of information request—but was rebuffed by the school.

Trained readers use rubrics to “minimize subjectivity, maximize consistency and avoid bias in the scoring process,” says UBC provost Angela Redish. The school cited three exemptions under the province’s freedom of information act, the most pressing of which was an existential question. UBC invested $200,000 in staff time and $1.76 million to update its admissions process and spends $75,000 each year to select, train and compensate readers. The school argued that releasing the rubrics to applicants defeated the point of broad-based admissions; disclosing how it evaluated character traits, UBC said, would equate to giving applicants the answers to an exam, which it argued would ruin the school’s investment in the system.

“If it’s innocuous, let’s make the criteria really open so everyone knows what they’re looking for,” Lister countered. The Ubyssey, which scored a legal victory in 2002 over gaining details of an exclusive beverage deal between UBC and Coca-Cola—setting a precedent for universities and their agreements with big corporations—pressed on with their request. It launched a four-year legal battle that cost the school and The Ubyssey tens of thousands of dollars, was ruled upon by the provincial privacy information adjudicator, and threatened to reach the country’s highest court.

At least, it did—until the legal battle came to a sudden end last Thursday, when The Ubyssey published a copy of a leaked 14-page rubric used to grade 2016 applications. Coordinating editor Jack Hauen says the rubric came from an anonymous source who approached him after reading a Ubyssey article about the case. The source also provided a copy of their employment contract with UBC.

UBC wouldn’t confirm whether the leaked rubric was authentic. “People who participate in the evaluation of students’ admission applications sign strict confidentiality agreements. If documents have been released to the media, it is a very serious breach of confidentiality,” Andrew Arida, director of undergraduate admissions, wrote in an email. 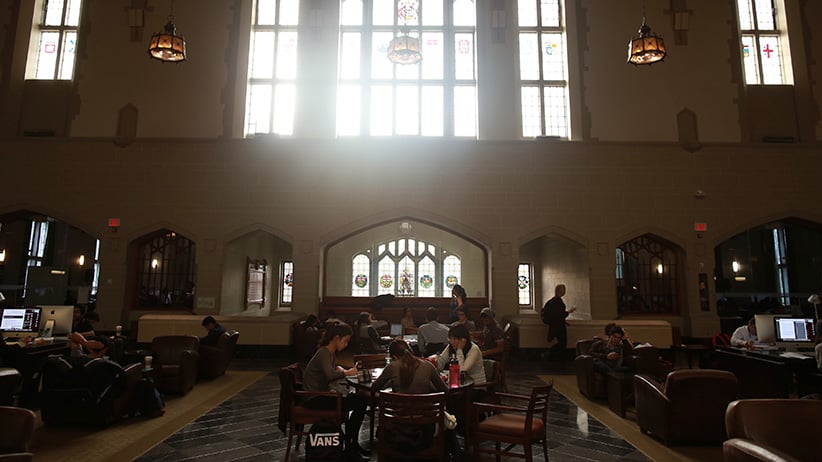 The rubric published by The Ubyssey details five attributes sought in applicants: Leadership; sense of self and community; initiative and achieving goals; intellectual readiness and expression; and problem solving and resilience. Profile readers, who grade on a five-point scale, are reminded that most applicants are young and to consider their access to opportunities. They are asked to leave answers unscored in cases of bias, such as a student’s religious views. Grammar and spelling have no bearing on an applicant’s score (nearly one quarter of UBC’s students come from abroad).

The rubric’s release fuels the debate about broad-based admissions—and whether schools have the right to keep metrics hidden from students. Critics argue that broad-based admissions favour wealthier students who might have the money to volunteer internationally or hire a writing tutor. “In Vancouver, especially, you have people who have access to private schools and counselors who might come from a background of admissions and who can tell you what the university wants to hear,” Ubyssey’s Hauen says. “It’s not a cheat sheet,” he added. “It’s not one person who’s in charge of broad-based admissions and you say three magic words and you’ll get into UBC. You still have to have had the experiences and to communicate them well. The importance of levelling the playing field is number one to us.”

As for whether this admission style is effective, UBC has reported a more “engaged” and “socially aware” student population since the move to broad-based admissions, Arida said in an affidavit. First-year students admitted under the new system have shown a “small but statistically significant” improvement in retention states, added Arida. UBC says about 10 per cent of its first-year undergraduate students would not have been admitted in a grades-only admission model.*

Schools that have employed “non-cognitive variables” in their admissions, a model espoused by Maryland-based higher-education researcher William Sedlacek — who UBC flew to its Vancouver campus in 2010 to consult with officials — have reported boosts in student retention rates and class diversity. (Oregon State University, one of the schools that has enjoyed success with Sedlacek’s methods, declined to comment for this story.) “It helps pick up on some groups that we may have missed out on,” Sedlacek says. “Older students, for instance, who are matriculating more. It’s a lot more fair for women, students of colour and international students, groups whose different life experiences we weren’t sure how to assess.”

But The Ubyssey’s push for transparency could raise alarms for admissions officers in Canada who are increasingly adopting holistic models. “If we release this information, are people going to understand the nuances that we apply to it?” said Ken Coates, a research chair at the University of Saskatchewan who studies Canadian universities. Coates argued the efficacy of an admissions system is tied to the degree that criteria is not made public. The newfound desire for accessing rubrics stems from growing “enrollment paranoia,” he added. “The kids have it like crazy. If you can’t get in to UBC and you have to go to a perfectly fine institution like Capilano University, there’s weeping and gnashing of teeth.”

“It’s the same question we get asked thousands of times,” says Andre Jardin, associate registrar of admissions at the University of Waterloo, about its admissions criteria. Waterloo, which is lauded for its science and engineering programs, requires applicants in a handful of programs to fill out short-answer questions similar to UBC’s. But it encourages applicants in all faculties to respond given the fierce competition. Most engineering applicants score between a 2.5 to 3.5 out of five points, according to numbers posted by the engineering school’s director of admissions. “When you read thousands of applications, you can quickly tell when a student has done a little something extra,” Jardin affirmed. And at McMaster University’s flagship arts and science program, only one in 10 applicants is admitted. Similarly to UBC, readers at McMaster use an applicant’s written answers to gauge their suitability.

“There’s no ideal supplementary application,” said program director Jean Wilson. “In fact, that’s one worry we have. We don’t want applicants to get the idea there’s a template or answer we want them to hear.” (McMaster and Waterloo declined to release their rubrics.)

But Sedlacek, the researcher who consulted with UBC and studies the efficacy of broad-based admissions, expressed surprise over UBC’s legal case. “I think it’s a healthy thing to open it up,” he said. “The idea that we’re reaching out, being inclusive and using the best research possible is good intellectual policy. It makes sense to politicians, parents and folks who are wondering why you’re doing this stuff.”

A B.C. senior privacy information adjudicator agreed. In her written decision, Elizabeth Barker said releasing the rubrics would take out the “guesswork” for students and help them better articulate their experiences to UBC. “The candidates would still need to provide a personal profile answer that relates back to their own individual experiences and reflections,” she wrote.

When asked whether UBC would abandon or re-design its rubrics, Arida wrote: “We are committed to maintaining a high-quality admissions process that is holistic in nature, fair to applicants, and that considers a broad range of criteria.” He added that UBC counsel would continue with its appeal.

But Ubyssey’s Hauen said the paper is dropping the case. It cost them $23,000 in legal fees, the annual budget of a small student paper — with about $13,000 of that total offset by UBC’s student legal fund society. (UBC would not disclose its legal costs.) “It feels like a huge weight has been lifted off us,” he says. “[UBC] seemed to be trying to outspend us at this point and drag it on. They knew as well as anyone that however you look at this law, whatever rational interpretation you can come up with, doesn’t support their claim.”

Hauen, who was part of the second class accepted through broad-based admissions, says the paper believes transparency is in UBC’s best interest. “You should probably consider not placing such a financial onus on remaining opaque.”

Correction: A previous version of this post reported that UBC’s affidavit about broad-based admissions came from Darran Fernandez. It was written by Andrew Arida.