The Ted Rogers Scholarship Fund supports young people with leadership skills who improve their communities. Here, inspiring stories from the class of ’17. 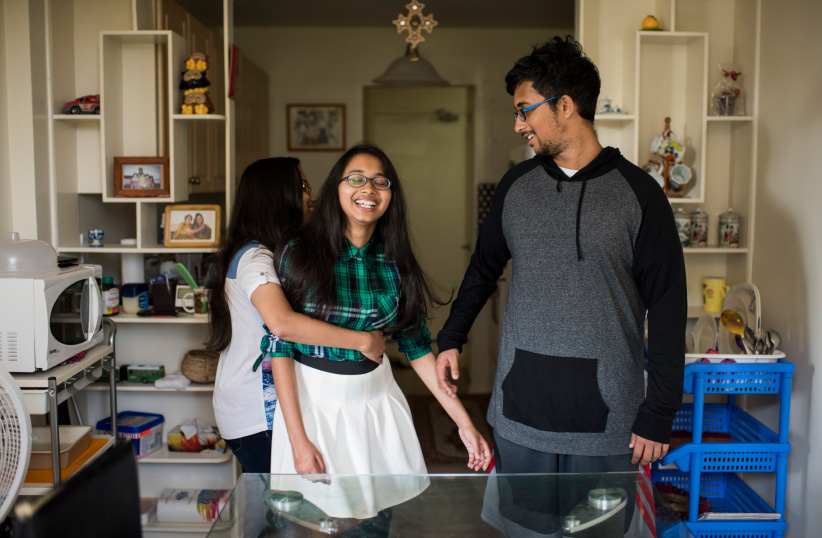 (L-R) Triplets Sajin, Sanjae and Samin Mahmud pose for a portrait in their kitchen in London, Ont. They are recipients of the Ted Rogers Scholarship and are all attending their first year of university. Sajin and Sanjae Mahmud are at Western University, while brother Samin Mahmud is at Wilfrid Laurier University. (Photo, Marta Iwanek)

The Ted Rogers Scholarship Fund launched in June 2017, working with partner organizations to identify young people with demonstrated leadership skills and a commitment to improving their communities. Created to honour the founder of Rogers (which owns Maclean’s), the scholarship provides up to $10,000 over the duration of an undergraduate degree. In its first year, 150 high school students from across Canada were selected as recipients. What follows are three tales of commitment and courage from the inaugural class.

Oreoluwa Idowu spent her first 10 years of life in Nigeria, in hiding. Her father’s family wanted a male heir, but her mother, a seamstress, gave birth ultimately to five girls instead. Oreoluwa came along as the third girl—“that’s when things got intense,” she says.

Her father’s family wished to get rid of Oreoluwa, her sisters and her mother to force her father to find a new wife and produce a boy. The sisters and mother moved every six months for anonymity, and Oreoluwa’s world was limited to her house, her school and the drive between.

She does not like to talk much about her early life, but does tell one story. One evening before sunset, in the city of Abeokuta, her teenage sister was coming home from buying groceries when she noticed a suspicious person out front. Her sister rushed inside. “I’m pretty sure someone’s watching us from the window,” she said. The sisters and mother panicked and packed up. “It just went from calm to 100,” Oreoluwa recalls. “Just grab some clothes, a toothbrush. Let’s go.”

As they fled to a motel, Oreoluwa had to leave behind a toy named Isabella (“I still miss that doll”), although she gladly abandoned other belongings (“I didn’t really grab my homework”). They moved to a new neighbourhood and switched schools. At home, they mastered Scrabble and played hide-and-go-seek until Oreoluwa’s only undiscovered hiding spot was a wedge between the wall and fridge.

In Grade 6, Oreoluwa moved with her mother and sisters to Canada to claim refugee status. They lived in a shelter in Ottawa while she began classes. She was baffled by French and frustrated by math problems with multiple operations, but took to clarinet and flute. Macaroni and cheese replaced her previous staples of jollof rice and plantains. While skating, she feared she would face-plant. “And I did,” she says.

“Oreo” joined the Youth In Policing Initiative of the Ottawa Police Service’s fraud unit, through which she educated seniors about fake Canadian Revenue Agency agents and credit card scams. At the Boys and Girls Club, she would take children on a walking tour through the capital city and helped host parties in December, wearing red-and-green “Christmas gear.” She played rugby at school, joined the students’ council, and co-founded a culture club, which hosted an annual cultural gala where she served a Nigerian dessert called “puff puffs.”

Oreoluwa’s father joined them in Canada last year, while her mother works night shifts at a factory making flyers for stores like Walmart (the family never wants for coupons). Oreoluwa works at an arcade running birthday parties, and during the back-to-school season at the clothing store Garage.

As she starts her first year at Carleton University, she’ll study criminology with a plan of becoming a lawyer. Of the move to Canada, she says, “Being able to go outside without being scared was a pretty good dealing. You could tell this was going to be our final stop.”

Sanjae Mahmud is a fraternal triplet from Bangladesh. She and her siblings were born within minutes of each other in the capital city of Dhaka, where their mother dressed them in nearly identical clothes. Their father, a member of the military, died when they were nine. Their now-single mother was a pediatrician, so the triplets would spend after-school hours at the hospital ward where she worked, giving each other rides on the reclining hospital bed. Sanjae’s brother, Sajin, was admitted to the ward when he got mumps; her sister, Samin, was too when a door squished her hand and took off her fingernail. Little surprise, then, that Sanjae plans to become a doctor.

But Sanjae doesn’t just want to help patients; she’s a triple-volunteer, who also gives her time to mentor immigrants and advocate for the environment. Her family moved to Toronto when the children were 12, and it took her two years to figure out the words “loonie” and “toonie” were not characters from Looney Toons. With the YMCA, she learned to rock climb and camp, and came to love manga comic books. She later joined a program called Next Stop Canada, which provides resources for newcomers. She hosts live chats with immigrants before they arrive—“So that they feel a bit reassured,” she says—and she blogs about tips like how to navigate the enormous Toronto public library system.

Living near the Scarborough Bluffs, and later in North York, Sanjae started hiking and advocating for the environment. With her high school’s “eco club,” she encouraged students to bring in recyclable electronics by offering brownies in exchange for dead batteries.

One morning in February 2016, Sanjae’s family woke up before dawn and drove to Mississauga for their citizenship ceremony. Since there was no coat check, she swore her oath while wearing matching winter jackets with her siblings, who are collectively known as “the Mahmuds.”

“Can you read each other’s minds?” people often ask the triplets. “No, we don’t,” Sanjae says. They’ve tried to dress more autonomously with new wardrobes from Ardene and Sears. For a summer job last year, Sanjae served cotton candy and popcorn at an amusement park and managed an attraction far more fun than a remote-controlled hospital bed—“I was responsible for the bouncy castle,” she says.

Sanjae also won a Ted Rogers Scholarship not just for herself, but also for her siblings. She was sitting in her second-period finance class when she got a call from her adviser at Next Stop Canada, who suggested she apply for the prize. When the scholarship committee learned about her family, it awarded the money in a multiple of three—enough for each triplet.

Sanjae will study medical science at Western, starting this year, in hopes of becoming a radiologist or dermatologist. Her sister will join her at Western University, though their brother will go to Wilfrid Laurier University . “It’s tough,” she says, but they spent the summer together visiting their uncle in Maryland. Sanjae continues to blog for Next Stop Canada. In one of her most important blog posts to date, she explains Canadian currency.

Marilynn Burch-Harvey deserves not only a scholarship, but a snooze. Waking up at 5 a.m., working a shift at Tim Hortons, volunteering as a dance instructor and later catering a banquet—she kept extraordinary hours last year while also completing Grade 12.

Burch-Harvey was encouraged to apply for the Ted Rogers Scholarship through the Boys and Girls Club in Edmonton, which has been her after-school destination since she was eight. There, she would help prepare chicken Caesar salads for dinner and practise dance—steps like the “ronde de jambe” in ballet and, in hip hop, “the groove.”

To pay the dance lessons forward, she started teaching younger children at the club, helped students rehearse four dances for her school’s spring show and choreographed a contemporary duet for two boys. She translated her interest in social justice into a final project for French class, where she envisioned an orphanage for displaced Syrians called “Maison D’Amour pour Syrie,” and drafted pamphlets. After receiving for Christmas the book I Am Malala, the story of a teenage girl in Pakistan who stood up for her right to an education, she read it in the hallways while walking between classes, or sitting up against the hallway wall, “trying not to run into anyone or get stepped on.”

Fuelled by a daily double-double, Burch-Harvey doubled as a student and employee. She took evening shifts at a banquet hall and staffed weddings on weekends. Though she ate well (including, memorably, the banquet hall’s lemon meringue), she says, “that whole year, I was never not tired.”

During high school, she also helped her father, a bus driver for the City of Edmonton. If he forgot his lunch box or thermos, she’d meet him at a stop and deliver it, then sometimes ride the bus with him until the end of his shift and drive their car home.

In 2015, Burch-Harvey was preparing for school one snowy day when she learned her father had had a heart attack. She visited him daily in the hospital while keeping up with school and volunteering, and still had energy to play fetch with her dog, a Bichon Shih Tzu named Orion, for whom she recently got a tattoo on her forearm in the shape of the stars in Orion, the constellation.

Next year, Burch-Harvey will study political science and human rights at MacEwan University in Edmonton, and plans afterward to transfer to Carleton University in Ottawa to be closer to the Canadian headquarters of Amnesty International. Before moving out, she studied French in Quebec City this summer and went to the Canadian Museum of Human Rights in Winnipeg. Her energy level may be genetic. In Winnipeg, she also visited her great-grandmother, who runs a fitness club at her assisted living home at the age of 93.