It covers a massive territory, but this northern school is designed to make Aboriginal students feel welcome 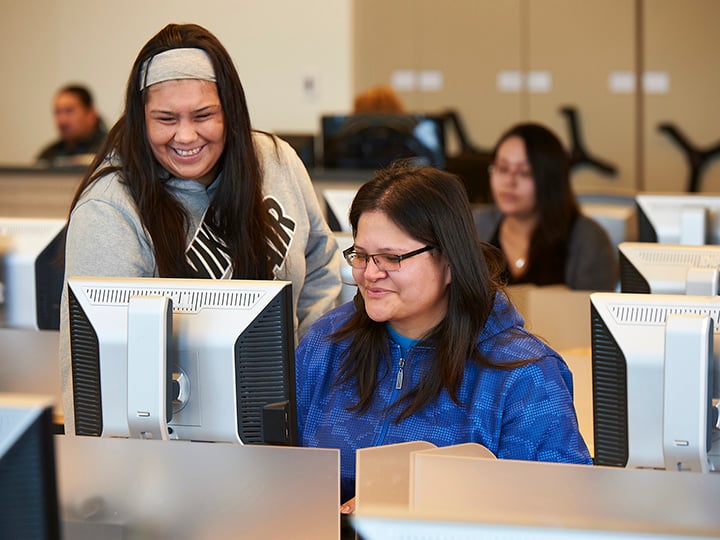 It’s not a stereotype: Aboriginal students in northern Manitoba are often shy and uncomfortable in large groups and living away from their communities. As Konrad Jonasson knows, bashfulness can be a barrier to post-secondary education for northern people.

Jonasson, who is half-Cree, is also president of University College of the North (UCN), established in 2004—with help from Aboriginal elders—to specifically serve northern students in a unique way. First Nations leaders, Jonasson explains, recognized many “of our northern students were going south and returning home by October, November, because supports weren’t there. They were being lost in the larger urban post-secondary environments and campuses.”

When Manitoba decided to make university-level education available in the north and converted Keewatin College into UCN, First Nations leaders wanted to make sure classes were small and intimate. They also wanted to establish additional teaching facilities in remote communities across the top of Manitoba so students didn’t always have to leave home to further their education.

The catchment area is massive, stretching 280,000 sq. m across the lakes and boreal forests of northern Manitoba, from Churchill in the north to Swan River in the south. Meanwhile, the entire population of that region is a sparse 75,000. The two main campuses are in Thompson and The Pas, but there are 12 regional centres in places such as Churchill, Pukatawagan, St. Theresa Point and Norway House. Some are only accessible by air or winter roads across frozen lakes and muskeg.

For those who must leave their communities for certain UCN programs, a critical element of success is the student and family housing residences in both Thompson and The Pas. “Before, it was said, ‘Our students were last in line for the worst possible housing,’ ” says Jonasson. Since 2012, both main campuses have had 24 units in each residence, including three- and four- bedroom apartments, ranging in rent from $300 to $1,000 per month depending on whether a student qualifies for government subsidies.

With more than 95 per cent of UCN’s enrolment comprised of  “non-sequential” students, meaning many come years after high school and after starting families, daycare is also vital. There are 140 daycare spots divided evenly between The Pas and Thompson.

About 2,500 students go to school at the various campuses each year. And, says Jonasson, emphasizing smallness again, “our faculty know who our students are.” With 68 per cent of its students coming from First Nations, Aboriginal culture is infused in UCN’s approach to the 40 degree, diploma and certificate programs it offers, including nursing, midwifery, teaching, law enforcement, business, natural resources management and various trade programs.

There’s an Aboriginal centre at both main campuses, each with a full-time elder on staff. A UCN council of elders also provides guidance and support to students, sharing traditional philosophies and knowledge with them regardless of a student’s background. Diversity and cross-cultural acceptance are promoted.

“Our elders are really utilized,” says Jonasson, conducting sweat lodges, sweet grass ceremonies and supporting students who may be struggling with classes or personal issues.

David Anderson coordinates the bachelor of education (B.Ed.) program, called Kenanow, Cree for “all of us.” It has, he says, a very different way of giving future teachers the skills needed to work in the education system, regardless of where they may end up teaching. During “culture camps,” Kenanow students spend up to four days at a time on the land learning from elders.

“It’s an Aboriginal perspective in teaching,” explains Anderson, one that has made UCN’s B.Ed. grads sought after by superintendents in the provincial school system. The camps include teaching about land and nature, as well as discussions on the impact of residential schools and hydro development on Native people. Kenanow, adds Anderson, celebrates student learning. “It’s not just giving them tests. It’s a different kind of approach. It’s about life and about honouring kids. And helping them grow as human beings, whether they are Aboriginal or non-Aboriginal.”

FILED UNDER: Editor's Picks University College of the North