The Olympian on campus

Every student struggles to balance homework, extracurricular activities and friends. Here’s how record-setting swimmer Kylie Masse does all three—and still has time to master the latest dance moves.

It’s a nearly impossible balancing act for Kylie Masse to keep up with university, swim practices, and hanging out with friends. On rare occasions, the school gods work in her favour. Last year, for example, she took a course about the Olympics, studying its history, problems, achievements and inﬂuence. Masse had a rare advantage over the rest of the class: she just got back from competing at the 2016 Games in Brazil.

For a ﬁrst assignment, the students were instructed to do a proﬁle on an Olympian, someone who had done something special at the Games. “I texted Penny [Oleksiak]: ‘Hey, I’m going to do my project on you,’ ” Masse remembers. Needless to say, Masse says she got a mark in the 90s for the report on her swimming compatriot and Canada’s youngest Olympic champion ever. Not many students can boast about having that kind of access to a gold medallist. 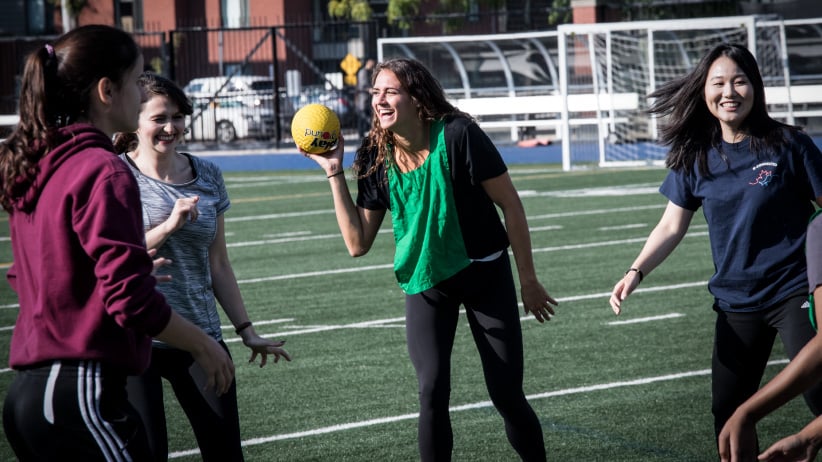 Masse is photographed during a drill of her “Practicum” class at the U of T football stadium. (Photo, Giovanni Capriotti)

Masse, meanwhile, boasts a very impressive trophy case of her own: Canadian Interuniversity Sports (CIS) Female Athlete of the Year in 2015-16, Olympic bronze in the 100-m backstroke at the 2016 Rio Games, and a world record time in the same event that earned her gold at the 2017 World Aquatics Championships in Hungary.

Masse is a bona ﬁde star in the water. And yet, when she’s walking about the University of Toronto campus, she’s just another kinesiology student hoping her favourite window seats on the ﬁfth ﬂoor of Robarts Library aren’t occupied when she needs to study. She doesn’t have a lot of free time to waste on ﬁnding a good seat to do homework—not with classes, morning swim practices, afternoons in the weight room, evening swim practices, media requests, out-of-town competitions, and—if she’s lucky—dropping into the occasional dance class with friends.

“With school friends, those outside of swimming, I get anxious around them,” Masse says, describing her constant life of catch-up on her studies. “They’ll say ‘I’ve studied all of this,’ and I haven’t even ﬁnished the ﬁrst chapter.”

Homework and studying ﬁll in her schedule around swim-related commitments, and she has no intention of letting her grades slip. She remembers once getting 43 per cent on a quiz in a ﬁrst-year anatomy class—and it quickly woke her up to the realities of post-secondary education. She soon turned the class around and, looking back, describes that as one of her favourite classes. 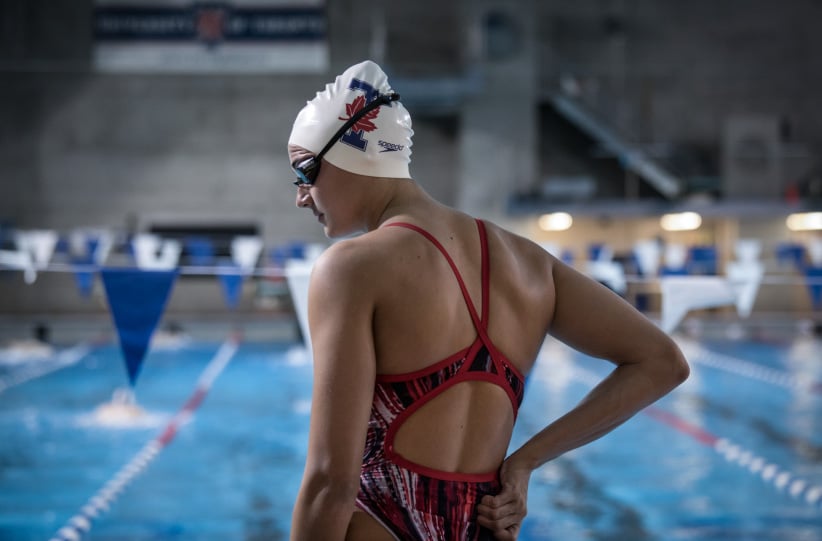 World Champion and Olympian swimmer Kyle Masse gets ready for her afternoon training session at the University of Toronto. (Photo, Giovanni Capriotti)

Now in her fourth year, her latest challenge as a student-athlete is ﬁguring out how to impress her professors, while further impressing the swimming world. That often means starting her day at 5:15 a.m. to get out the door, changed, and in the pool for 6:30 a.m. practice. And then, she may not get home until after dark.

“She has to plan her time well because she doesn’t have a lot of it,” says Kylie’s sister, Natalie, who is one year her junior and also studying kinesiology at the University of Toronto. In fact, with Kylie taking a partial course load to accommodate her swimming commitments, Natalie will likely graduate before Kylie does. They’ve already taken several classes together. “Last year, we always went to the library to study together,” Natalie says.

Not that being leapfrogged by her little sister irks Kylie. If it does, she won’t let it show. Her teammates and coaches say Masse is among the most happy-go-lucky people around the pool.

“If she doesn’t come in laughing, singing or dancing, we know something’s wrong,” says Linda Kiefer, assistant coach for the Varsity Blues swim team. The rare challenge for coaching Masse—the unofﬁcial DJ for the swim team, according to several teammates—is making sure her music playlist for practices (a mix of rough hip hop, reggaeton and dancehall) is scrubbed of any inappropriate language because of the recreational swimmers nearby.

“They know which songs they can play and which they can’t, but sometimes someone will yell: ‘Oh no! Linda, go change the song,’ ” Kiefer says.

Should Masse ﬁnd any spare time on a weekday, however, drop-in dance classes are a must. “Kylie and I just went to a booty pop dance class,” says her friend Vanessa Treasure, a former Varsity Blues swim captain. What’s booty pop, exactly? “Look it up, she’s really good at it,” Treasure laughs. 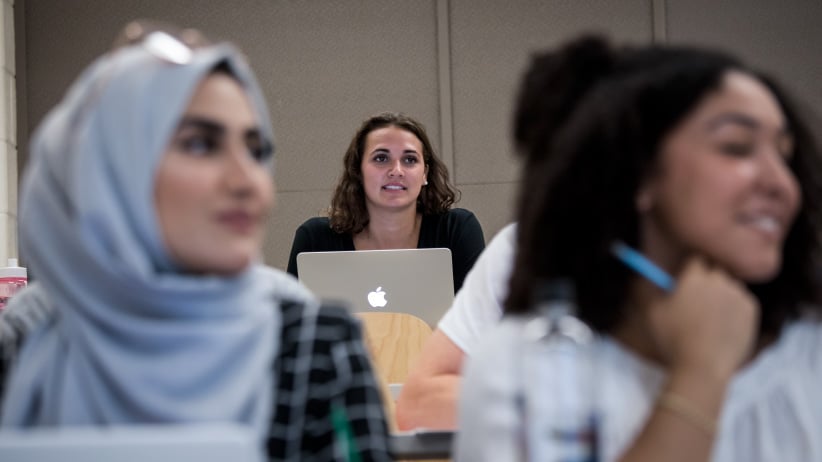 Masse is photographed during one of her classes at the University of Toronto. (Photo, Giovanni Capriotti)

The fact that Masse is studying at a Canadian post-secondary school at all makes her a bit of an anomaly among this country’s elite student-athletes. Many of Canada’s best amateurs opt to travel south for school, where American universities often have better facilities—and more state-of-the-art technology—for high-performance, sports-focused student-athletes. Not Kylie.

Then again, any Olympic-sized pool would have looked especially swanky considering where Masse started her competitive career. “We trained in a six-lane, 25-yard pool,” says Rachel Rodé, a fellow Varsity Blues swim member, who was also one of Masse’s teammates growing up in southwestern Ontario with the Windsor Essex Swim Team (or WEST, for short). “During practice, you’d share a single lane with 12 other people. You were bound to hit somebody.”

And while Masse and Rodé have soft spots for their old club pool, their former coach is more upfront about its conditions. “We swam in horrible—not bad, horrible—pools,” says Andrei Semenov. “The pool was like swimming in a Jacuzzi, it was so warm. We swam in pools where the concentration of chlorine was so high that kids would cry after 15 minutes. We swam in conditions like sardines in a can.” Semenov says that the ventilation could be so poor that he sometimes had to stand by an open door with a hose of cold water to wash the kids as they came by. 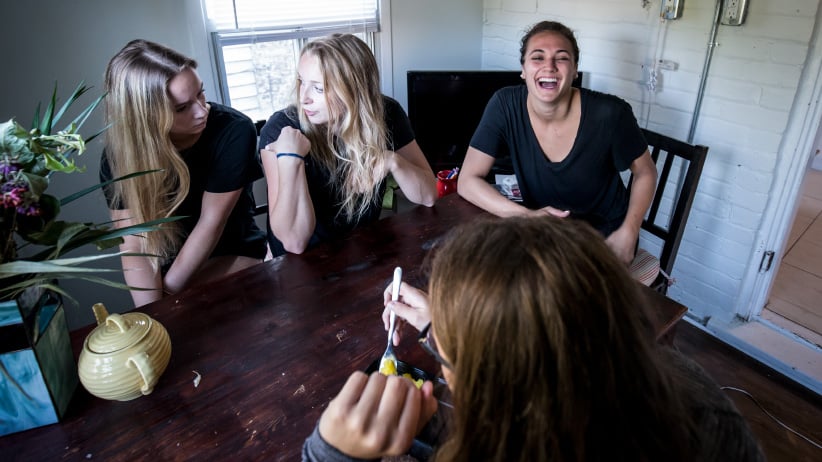 Masse, right, sits at the the table with her roommates and U of T swimming teammates, Cino Ling, centre, Parrie Armstrong, left, and Sarah Hodge, at their shared residence. (Photo, Giovanni Capriotti)

But with that, Semenov says the swimmers had a choice, one he describes playing off the words of Shakespeare: “To be tough, or not to be tough.” Not only did Masse become tough, she also got so fast in the water that she won the award for the WEST Swimmer of the Year four years in a row before she joined the University of Toronto varsity swim team in 2014. The frequent wins led parents to complain. Maybe another girl could feel good about winning it too? Semenov was unpersuaded. “I said no. If somebody is better than Kylie, I’ll give it to her,” he says. “I don’t care if parents don’t want the same girl recognized; Kylie was the best.”

Masse might be the best in the world right now, but back on campus she appears more serene than anxious about another year of school. Maybe it’s the water. Maybe it’s because exam season is still months away.

What’s more nerve-wracking: competing in swimming’s world championships or taking an exam? “Sometimes writing an exam,” Masse laughs. “It depends on the class.”