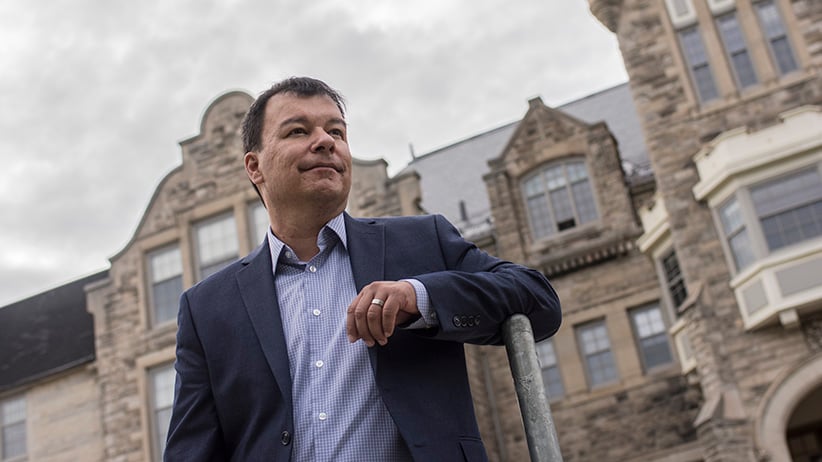 Canada’s newest law school opened in northern Ontario in 2013 with a unique commitment to teach about small-town practice, natural resources and environmental issues and, not least, Indigenous law.

This week, the first graduates of Lakehead University’s Bora Laskin Faculty of Law are among those being called to the bar at a Law Society of Upper Canada ceremony in Toronto. The members of the inaugural class are largely living up to the original aspirations for Laskin—one of two schools in Canada with a required curriculum on Aboriginal law—to offer a new approach.

Of 58 students who graduated from the three-year juris doctor degree this spring, 32 have started legal careers in northern Ontario communities; another six are with legal firms in small towns elsewhere in the province. Five graduates either do not have jobs yet or haven’t reported where they are working, according to faculty officials at the school, named after the former chief justice of the Supreme Court who was born and raised in Thunder Bay, Ont., home of Lakehead University.

In the first cohort, four students self-identified as Indigenous while another four have Indigenous roots—a modest start on Laskin’s ambitions to recruit future First Nations, Metis and Inuit lawyers. “This is a marathon, not a sprint,” says dean Angelique EagleWoman, the first Indigenous woman to head a law faculty in Canada. Her faculty is expanding its outreach efforts this fall.

Already, some Laskin graduates see themselves as agents of change following last year’s recommendations of the Truth and Reconciliation Commission and a newly established federal inquiry into missing and murdered Indigenous women.

“It’s a little premature to say they are all going to go and save the world,” says Celina Reitberger, executive director of Nishnawbe-Aski Nation Legal Services in Thunder Bay, whose daughter Elysia (featured below) is among the first graduates. “But the timing is perfect: we have a federal government talking about how to make things better and we have the [Ontario] provincial government talking about reconciliation.”

Toronto lawyer Julian Falconer, whose firm is increasingly involved in high-profile Indigenous advocacy work and hired two Laskin graduates earlier this year, also sees a “perfect storm of opportunity” to repair historic wrongs. But he too sounds a word of caution: “I would be careful about declaring victory in circumstances where we literally have centuries of oppression behind us. We created a terrible plight for our Indigenous brothers and sisters and we hardly are going to fix it overnight.”

In 2011, as a reporter for the Wawatay News in Thunder Bay, Shawn Bell wrote about the challenges for northern Ontario communities, including First Nations bands, to manage natural resource development.

One First Nations community, he recalls, “had 40 mining companies wanting to deal with it at any one time, with a band membership of 240 people and only 10 to 20 [of them] had more than a secondary school education. This really struck me that this was a no-win proposition.”

Situations like that served as an impetus for Bell, who grew up in southern Ontario, to consider a career switch. The law “is an opportunity to dig your teeth into something more in-depth than I had an opportunity to do as a journalist.”

Bell had some knowledge of Aboriginal issues and was initially skeptical of the seemingly “touchy-feely” aspect of some of Laskin’s Indigenous-focused curriculum, including a non-credit course where students learn about Aboriginal culture and traditions. By third year, he saw things differently because of the positive response of fellow students, some with little prior Indigenous knowledge. “Having elders come in and talk, even something as small as going through a smudging ceremony or being in circles and talking in those forums, has an impact on the way you think,” he says.

As a band council member of Sandy Lake First Nation—and its chief for 2008-12—Adam Fiddler preached that it is never too late to get an education. In 2013, at the age of 40, the married father of three children returned to school to fulfill a lifelong ambition to be a lawyer.

“It was time for me to stop talking about it and actually do something,” he says.

Fiddler became interested in legal issues at the age of eight, listening to the debate over the 1982 repatriation of the Canadian Constitution.

The oldest member of the Laskin class, Fiddler admits that returning to school as an adult had its challenges. With no university degree, the former CBC Radio reporter and back-up host took online and in-class courses at Lakehead to earn the necessary prerequisites before being accepted at Laskin and the University of Ottawa faculty of law. Bilingual in Oji-Cree and English, Fiddler had to parse 18th-century law texts in his standard contracts course for their modern-day meaning in English, then translate the words back into Oji-Cree, a visual language, to understand them.

Advocacy comes easily to Elysia Petrone Reitberger. While in environmental studies at the University of Ottawa, she met an environmental lawyer during a class project to interview stakeholders in a dispute over garbage seeping into a river. “I thought it would be really neat if you could do that using the tools of the law,” she says.

In 2012, after earning a master’s in environmental studies at Lakehead University, she helped organize a 10,000-signature petition, urging Maclean’s to add divestiture of fossil fuels to its annual ranking of universities.

Petrone Reitberger, whose mother’s family is from Fort William First Nation, applied to Laskin for its focus on First Nation and environmental issues, small classes, a philosophy of hands-on learning and a semester-long work placement called the ‘integrated practice curriculum’ that replaces the requirement to article with an employer for 10 months after graduation.

In third year, she spent her semester at the Thunder Bay officer of Falconers LLP, assisting lawyers representing Nishnawbe Aski Nation at an inquest earlier this year into the deaths of seven First Nations youth who had left their remote communities to attend school in Thunder Bay.

Petrone Reitberger, whose mother is a lawyer, is one of two Laskin graduates hired by Falconers.

“I am happy to be working for this firm where I am getting to work on First Nations membership issues and getting access to better justice and rights,” she says.

Of mixed ancestry, Samantha Ramage grew up on Manitoulin Island, where her Cree mother served as an Ontario Provincial Police officer. “Having a police officer parent definitely exposed me to the criminal justice system,” she says. At university, she says courses on Indigenous learning “introduced me to colonialism and the violence that stems from it.”

With those influences, she says she resolved “if I could do anything to alleviate some of those conflicts, I would like to do that.”

Ramage applied to Laskin for its curriculum blend of Aboriginal and Canadian law. “It got to be a little frustrating when you were learning about those two things,” she concedes. “That sort of frustration is exactly why I chose Lakehead.”

In third year, she took Laskin’s integrated practice curriculum, a new alternative to the conventional law school requirement to article with a firm after graduation. She earned a placement in the Thunder Bay office Falconers LLP, assisting at the First Nations youth inquest. “It was definitely an eye-opener,” says Ramage.

“I want to be a part of the change,” she says as she embarks on her law career. “I think my role in that change will be around accountability, with regard to the Crown, and asking those questions that Indigenous people have been asking forever.” Namely, she asks: “Why are things the way they are and [how] can they be different?”

After working for several years in human resources, Warren Mouck decided to go to law school to specialize in labour and employment legal issues. Born in Whitby, Ont., he discovered Laskin by chance, choosing Lakehead because his father enjoyed his undergraduate experience in Thunder Bay in the 1970s.

Mouck says learning about Aboriginal legal issues as part of the school’s mandated curriculum proved invaluable in his education. “You do transform your understanding of Aboriginal issues,” he says. “Comparing what I knew then to what I know now, it’s really a complete 180-degree turn.”

After graduation, he chose to stay in Thunder Bay. “It is a great place to work and there is a lot of work,” he says. He was hired by Cheadles LLP, where he earned a work placement in third year, and now estimates he works on 25-30 files with some link to First Nations issues. “Most of Canada is in the dark about Indigenous people issues,” he says.

While studying chemistry and engineering at Queen’s University, Matthew Siddall took an elective course on law and literature that sparked his interest in law. “It was all about shifting the cycle from retributive justice—an eye for an eye—to restorative justice,” he says.

Though accepted elsewhere, the native of Orillia, Ont., chose Laskin for its small classes and focus on equipping lawyers for general practice legal careers, not Bay Street. But entering law school, he still was not sure he had found his calling.

That changed in his three years at Laskin, says Siddall, as he learned about Canadian criminal law and gained perspectives on Aboriginal legal practices. For example, he says, “sentencing circles are starting to be seen for the value they can give whether the offender is Aboriginal or non-Aboriginal. It [law school] has definitely given me another set of tools I can use.”

After graduation, he received an articling position with the provincial government in the duty counsel office of Owen Sound Legal Aid. In August 2017, he will move to Ottawa for a one-year clerkship with a judge with the Federal Court of Canada.