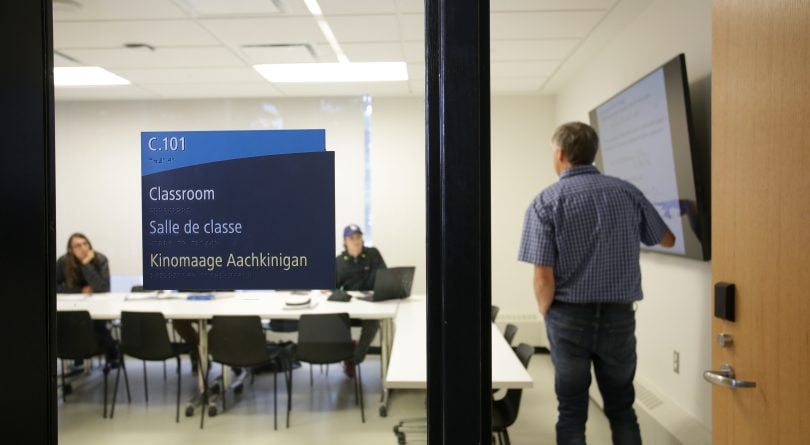 “As an Indigenous student, sometimes you feel like you don’t belong in these institutions and that these spaces aren’t for you,” says Bourque. “Seeing the language of the territory recognized [on signs] shows how Laurentian cares for Indigenous students.”

Over the summer, Laurentian added Anishinaabemowin to signs labelling buildings, classrooms and other student spaces on the school’s campus, which is situated on Atikameksheng and Anishnawbek territory.

“It is so great to see the amount of work that was put into translating these signs,” says Bourque. “A lot of these words did not exist for Anishinaabe people—for example, ‘math’ or ‘lab’—so you can see that it took a lot of work from the Elders and the language speakers to be able to translate these concepts.”

READ MORE: Lethbridge says ‘oki’ to everyone who visits

Bourque was part of the consultation as a student representative on the university’s Truth and Reconciliation Task Force (TRTF), which was established by the Laurentian University Native Education Counsel (LUNEC) in the fall of 2018. “[The signs] add a layer that is more than tokenistic,” Bourque says. “I think it is very much real.”

“The university really focused on doing typical things like land acknowledgements and throwing around the word aani,” she says. (The word aani means “hello” in Anishinaabemowin.) “When they set out to create the [task force], it showed that [they were] ready to listen.”

The task force established by LUNEC was tied directly to outcome 21 of the strategic plan supporting the Truth and Reconciliation Commission’s 2015 Calls to Action.

Bourque says that the task force meetings included consultations with administration from different departments, university stakeholders and members of the local Indigenous community. “It [was] not four people sitting in a room, deciding what is good for Indigenous people,” she says. “It was rooms full of Indigenous people together being asked, ‘How can we support you?’ ”

Mary Ann Corbiere, a professor who teaches Nishnaabemwin in the department of Indigenous studies at the University of Sudbury, a federated university on Laurentian University’s campus, translated some of the signs. She described pondering the translation of a parking sign. “We don’t have a term for parking,” Corbiere wrote in an email. “Everyone just uses the hybrid verb parkwi (which by itself means ‘he/she is parking’). Another aspect that made it hard is that we don’t have infinitives or gerunds per se.”

“The verb parkwi would need to be conjugated for a particular person, in this case ‘they,’ ” wrote Corbiere. “To get the message in the [English] sign across in Nishnaabemwin, speakers would say GchiNshinaabek eta maanpii daa-parkwiwak, which means ‘Only aged people can park here.’ ” Corbiere explained that this illustrates another challenge for signage. Nishnaabemwin translations of phrases are often much longer than the English phrases.

According to Corbiere, there are not always words in Anishinaabemowin to adequately describe modern tools and concepts. While groups of people are working to come up with new words, their effort depends on funding and time. “There is that kind of work going on, but on the practical side, some of the terms are difficult to encapsulate in a concise form,” Corbiere says.

Corbiere says it can be difficult for adult learners to grasp the language. “They often have fabulous written works that can be conveyed in English writing, but these expressions do not always sound the same way in Anishinaabemowin when you are translating it word for word,” she says.

“I want learners of the language to have as much fun with the language as I do, as fluent speakers do,” she adds. “We do so much with language; we aren’t just conveying facts and information. You are joking around with it, playing with words, creating novels, writing poetry, composing songs and so on.”

“The signage is a nice gesture, but there is so much more needed to be done,” Corbiere says. “It would be unfair to expect the university to resolve that on its own, because there is work that needs to be done [at all levels] to preserve some kind of fairly standardized way of writing.”

Mathew Dueck, a student in Indigenous studies and student representative involved with LUNEC and the task force, says that while the signs are a “good start,” they are also a “symbolic measure.”

“I’m not minimizing the importance of it,” he says. “From a student perspective, it is wonderful to see my indigeneity reflected in the signage on campus. It makes me feel more comfortable as an Indigenous student; it brings me to a place where I feel a sense of culture and welcoming.”

But, he adds, “while the signage is reflective of the land and the language, this is not the epitome of what reconciliation is. While this is great, there need to be deeper commitments.”

Dueck says larger initiatives (recommended by the Truth and Reconciliation Task Force) include funding sources—outside of Indigenous program funding—to ensure that the teaching of culture and language comes from local Anishinaabe people and that all staff, faculty and students at Laurentian receive cultural competency training.

“Maybe we increase the availability of classes to learn the language or provide opportunities for staff and faculty to take classes [in Anishinaabemowin] rather than French,” says Dueck. “We need to understand that the second language of many people in Indigenous communities is, for example, Ojibwe or Cree, not French. Some of us can speak all three and some of us can’t,” he says.

This article appears in print in the 2020 University Rankings issue of Maclean’s magazine with the headline, “What the signs really say.” Order a copy of the issue here or subscribe to the monthly print magazine here.