Learning from and by the sea

A pioneer in aquaculture research lives next to his underwater farm 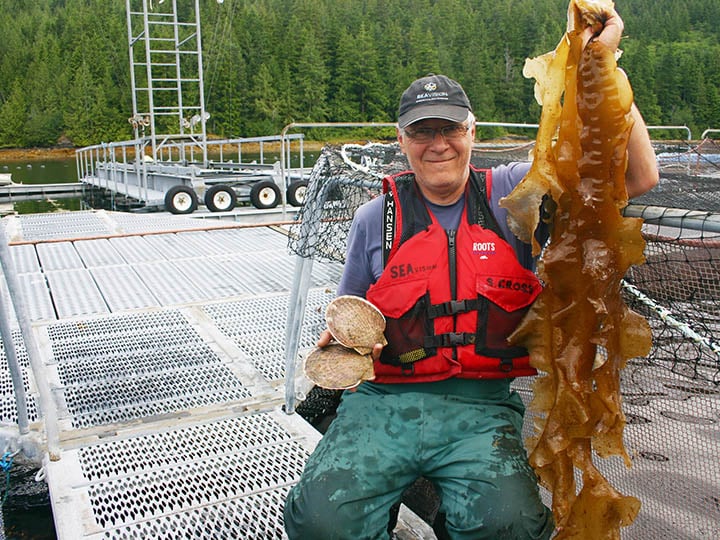 Stephen Cross has spent his career studying the sea. Sometimes he even sleeps on the water. At his facility off the west coast of Vancouver Island, the researcher regularly stays the night in what one student describes as a “floating house,” as it is too remote for practical commuting. Located in the quiet community of Kyuquot, it takes 3½ hours to reach from Courtenay, where Cross lives. The place has few inhabitants, with an official population of 150. But out in the water is a world in itself—and its creator is Cross.

Cross is a researcher at North Island College (NIC), an associate professor at the University of Victoria and the operator of a 15-hectare fish farm with a unique setup. “It is the only licensed multi-species farm in Western Canada,” Cross says of his site where finfish live with oysters, mussels, kelp and, at the water’s bed, sea cucumbers. “You have a system that will probably function more like a natural ecosystem.”

Cross, who is among the scientists who pioneered the technique, feeds only one of the species: the sablefish, also known as black cod, whose soft flesh is mildly flavoured. The rest practically feed themselves. “They will filter any of the organic waste created by the fish and use that as food,” Cross says. That solves a problem long faced by the aquaculture industry—what to do with the waste of thousands of fish living together in close proximity. “They all have economic value,” Cross says of his non-fish species, which he can grow and sell along with the fish.

Cross has been working for NIC since 2013, when he was appointed its industrial research chair for sustainable aquaculture. At the college, he leads projects such as developing new sea floor and water-monitoring techniques and testing the feasibility of growing kelp at salmon farms around the coast. Although Cross strictly does research at NIC and does not teach, he has been involving the college’s students in his project. He hires a couple of students through NIC every summer, putting them to work in a variety of fields. “Aquaculture is multi-disciplinary,” he says. “It’s not just biology: electronics, chemistry, you name it.” Angela Prins, who took a food safety course at NIC, spent the summer making a map of Vancouver Island. Using specialized software, Prins mapped out potential aquaculture sites around the coast.

Cross plans to eventually partner NIC students with graduate students from the University of Victoria. “My concept and goal is to have them start projects related to my research and then use NIC students as their assistants,” he says. “It’s sort of a two-pronged approach to engaging college students in research.”

As well, in a separate project, Cross has assisted the school in developing its own aquaculture technician program. Last year, he helped to identify teaching topics and to formulate the course structure for the one-year program. In a trial run this year, he had 15 students live on his floating house for three days each. “They would be doing what a fish farmer or shellfish farmer would be doing: getting up in the morning, checking equipment, feeding fish,” Cross says. “It’s just taking it from a classroom to a practicum, if you will.”

Being a farmer on a multi-species farm would not be too different from being one on a traditional, single-species farm, Cross says. “The challenge for the research is to figure out what the optimum balance of fish to shellfish to seaweed to sea cucumbers and whatever are.” When that happens, the multi-tropic farm will have its own niche market—environmentally sustainable and organic seafood with a diverse selection, Cross says. “You’ll see it sprout up all over the place.”