A program that teaches students how to design instruments for outer space is a launching pad to many other careers, too 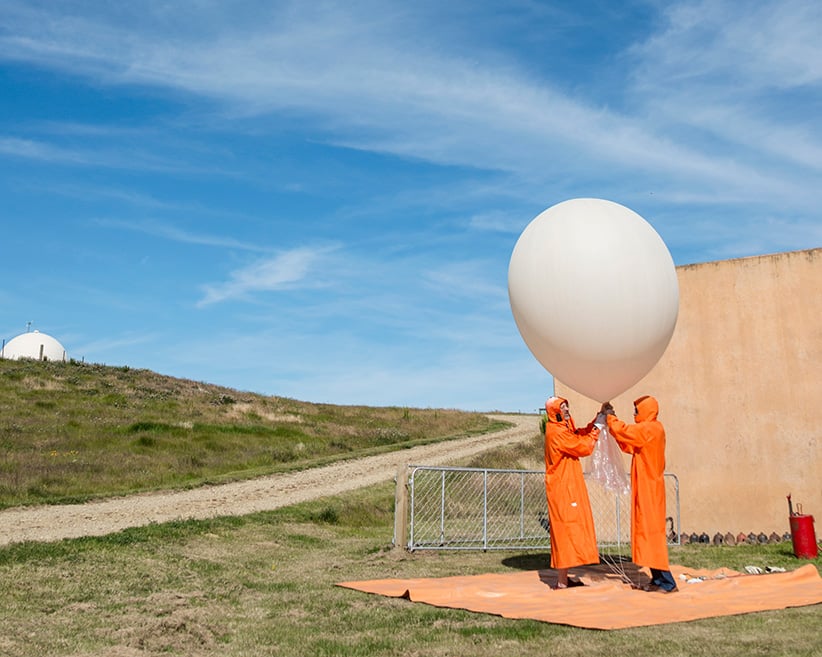 Every week at Lauder, ozone sonde balloons are launched carrying chemical ‘in-situ’ sensors to altitudes of around 35 kilometres before descending back to the ground. (Dave Allen)

A few latitudinal degrees below the urban hubs of New Zealand lies Otago, one of the southernmost regions of the country and one of the most remote locations on Earth. A Maori term for “isolated village,” Otago is a vast region that holds roughly the population of Saskatoon, but the locals are spread out between high alpine mountain ranges and large glacial lakes. Its near absence of man-made pollution makes it the ideal spot for Richard Querel’s climate studies.

A graduate of the University of Lethbridge’s space instrumentation program, the Ontario native is now a program leader at the Lauder atmospheric research station, part of New Zealand’s National Institute of Water and Atmospheric Research. Rather than pursuing a career in space instrumentation, Querel is researching the long-term effects of climate change by launching balloon-borne technology over the ozone layer to capture changes in air pressure and temperature.

It’s an unexpected choice for someone whose Ph.D. research orbited around the principles of astrophysics, but the program provided an interdisciplinary set of skills he found applicable to a new field of study.

Six years ago, Querel completed his Ph.D. in astronomical instrumentation at Lethbridge under the guidance of group director and experimental astrophysicist David Naylor. The program—comprised largely of graduate students, although undergraduates are welcome—consists of courses in experimental methods that alternate on a three-week cycle throughout the year. The students are taught how to create and use assorted machinery: telescopes, satellite equipment, drones and infrared detectors built to withstand very cold temperatures. The program teaches its students the fundamentals of crafting technology bound for outer space.

Querel uses “a surprising amount” of what he learned in the program to study the ozone layer. “I’m involved in developing instruments here and collecting their data,” he says. “You do a master’s, you do a Ph.D., and you might end up in some very well-defined corner of a field that doesn’t see a lot of light; whereas the stuff that I learned about instrument design and data analysis . . . I use a lot of that.”

Querel embodies a common trend among former students of David Naylor: He’s found work opportunities around the globe. Some are research professors, while others work at engineering services companies like Montreal-based SNC-Lavalin. One works at the Department of National Defence, while others landed at municipal government agencies in Vancouver and Toronto.

Before moving to Canada, Naylor worked at the European Space Agency in Noordwijk, Netherlands, as a research fellow for the European Space Research and Technology Centre. A recipient of a Commonwealth scholarship to study in the U.K., he received his B.Sc. in physics at the University of Sussex in 1974, then was hired directly out of his doctoral program at the University of Calgary in 1979 and given a $2-million grant to help build a massive spectrometer for the Herschel Space Observatory, run by the European Space Agency. “I had so many toys, it was just unreal. It was the best time of my career, in many ways,” he says.

He likens the program’s diversity of employment opportunities to its interdisciplinary premise. “Math is the language, and physics is the application,” he explains. Students primarily use engineering methods to create the instruments, but they can’t apply those methods without a math and physics background. “You wouldn’t try to interpret a French novelist if you couldn’t understand the French language,” he says.

Recently, the Lethbridge program received a $500,000 grant from the Canadian Space Agency. Naylor will put 90 per cent of that money toward student training, while students collaborate on a core spectrometer for a space-exploration project headed by the Japan Aerospace Exploration Agency (JAXA).

This collaboration is representative of the opportunities that the program’s faculty foster. Along with students, they actively network with government agencies around the world and have previously worked with institutions like JAXA and the U.K. Ministry of Defence. “I have a saying that it takes a family to raise a grad student,” says Naylor. “And I think when it comes to space projects, it really takes a very extended family—you’ve got to be connected. We have equipment, but we need help from others to do the kind of work we do.”