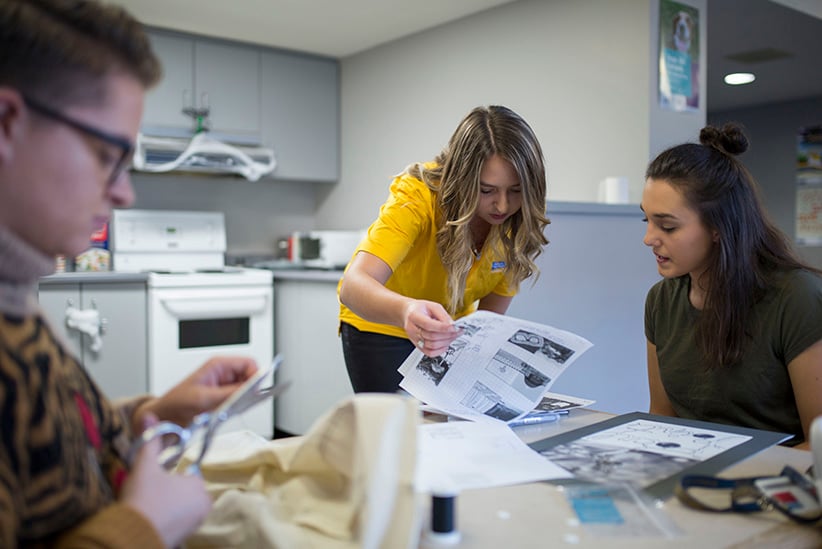 Students on the fashion floor in residence at Ryerson University. (Photograph by Nick Iwanyshyn)

The definition of “living learning communities,” or LLCs, is right in the name. “It’s an opportunity [for students] to learn where they’re living and complement their academic studies,” explains Franco Solimano, manager of living-learning for the University of Waterloo.

Typically, an LLC consists of a floor or part of a floor in residence that’s dedicated to either an academic or theme-based community. Each community has an upper-year student on staff to facilitate programming and act as a resource for residents.

This academic LLC, tied to the university’s school of fashion, has 40 students. Academic links—staff members who are also fashion students—lead the floor. The programming changes every year: residents have gone on field trips to retail outlets, attended Toronto Fashion Week activities and hosted a popular faux wine and cheese event.

Shayna Tinson, 19, a third-year fashion communications student, lived on the floor during her first year and has been on staff for two. “It’s definitely good to have people to bounce ideas off, or to go to when you have questions.” Tinson says the LLC helped her academically, which is a common experience, according to Ian Crookshank, director of housing and residence life. “When you get something wrong in this program, you pour a lot of your heart and soul into it,” he explains. “Criticism can feel personal, and when you have someone next door who’s going through the exact same thing, it’s a bit easier to deal with.” 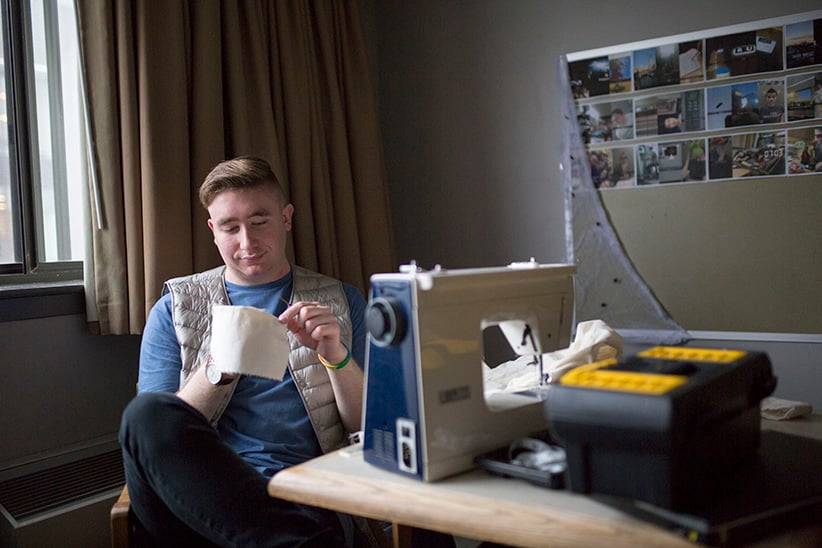 A student on the fashion floor in the residence at Ryerson University. (Photograph by Nick Iawanyshyn)

Named after the Paris prison, this LLC dates back to 1984, when the principal of the college decided to dedicate one of the co-ed floors to students who wanted to speak French. “The idea behind it is to bring students with a French cultural background, French-language background or an interest in continuing French language together while they’re here,” says Steve Prentice, residence and community life manager at St. Paul’s.

Samuel Gloire Gatabazi, a 23-year-old environment and resource studies student, was the don for 18 students last year. Even though it’s not his major, he takes French classes and loves the language. “I was born in Rwanda, which used to be a French-speaking country, but I grew up in Kenya. In high school there I took French for four years, so that’s where my passion began,” he explains.

Supported by the Schulich School of Engineering, this academic LLC started three years ago and houses 50 students over two floors and three wings (co-ed, male and female). “Engineering is not a department or degree that you can solely do on your own. Unless you’re Albert Einstein, most students need to support each other,” says academic community adviser Jay Stueck.

It also exposes students to engineering initiatives on campus. For example, six clubs and teams—like the solar car and racing team—all sponsored by Schulich, came into residence for a meet and greet.

To get in, students explain why they want to live there in up to 250 or fewer words. “We’re looking for students who are driven and willing to expand their horizons, not just in engineering, but in themselves,” says Stueck.

Sam Skranak, 19, is a first-year engineering student who made the cut. “I felt that I could be more successful if I was surrounded by students who had the same classes, homework and everyday struggles,” he says.

Every two floors in the Tower residence have a different LLC, all of them interest-based. “Right now, I receive more applications than [there are] spaces,” says Angi Ross, coordinator of residence education at the university.

Ariana Sholinder, 20, is a third-year biology student and residence education community leader. “It’s a place for like-minded individuals  to be living in a more intentional space where we do programming based on interest and passion,” she says.

To get in, students have to explain why they want to live there and what they hope to contribute.

A lot of the programming revolves around volunteerism. This year started off with a big oceanside cleanup. “I’ve always found that I feel the most comfortable when I feel like my life isn’t just serving myself,” says Sholinder.