At Lakehead University and the University of Winnipeg, students must take a course in Indigenous courses to graduate 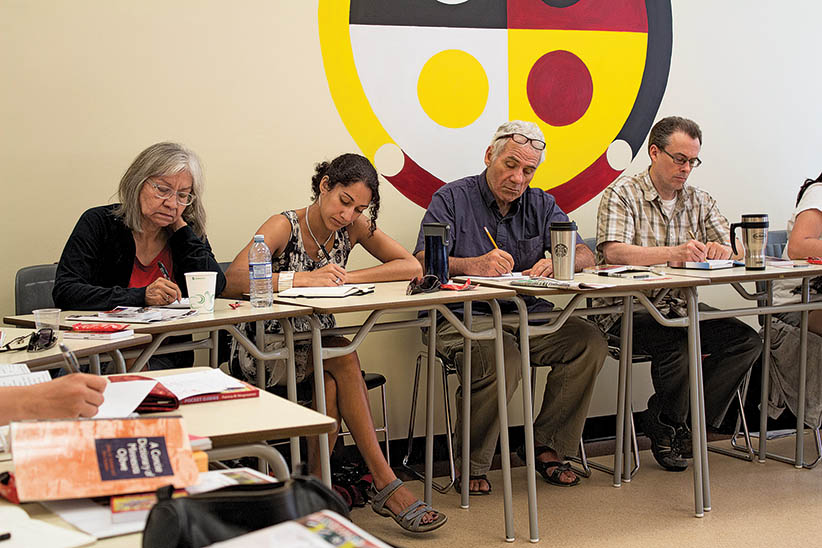 Some universities make students take a math course before they get an arts degree, just as some engineering students are now being schooled in the liberal arts. Starting next fall, undergraduate students on two Canadian campuses, the University of Winnipeg and Lakehead University in Thunder Bay, Ont., will be required to take a three-credit course in Indigenous culture or history to graduate. It’s a big, bold move meant to combat racism and foster reconciliation in cities where Indigenous residents continue to face discrimination and titanic barriers.

“We’ve got a tough history in Winnipeg,” says Rorie Mcleod Arnould, a non-Indigenous student who is the past president of the University of Winnipeg Student Association (UWSA). “There’s a lot we need to take account of, and be aware of.”

Last winter, the UWSA and the University of Winnipeg Aboriginal Students’ Council jointly submitted a motion to the University of Winnipeg Senate asking that students be required to take one of the university’s 100-odd Indigenous studies courses before graduation. They include courses on race and justice, one on Inuit art, and one that examines encounters between Christian and Indigenous religious authorities.

The approval came March 26, and followed months of emotional debate on race relations in Winnipeg, sparked by the murder of 15-year-old Tina Fontaine. The Indigenous girl’s remains were found last August in a garbage bag in the Red River, just a few blocks east of the university. “Racism is unacceptable, and bigotry is unacceptable. This requirement is not a solution, but it represents a big step forward for the university, and for Winnipeg in general,” said Mcleod Arnould, 25.

Three years ago, the aspiring economist, who grew up in the white, middle-class Winnipeg neighbourhood of St. James, took a class on inner-city issues. He remembers “choking up” after hearing an Indigenous presenter describe a vicious beating at the hands of white police officers. “There was this entire side of Winnipeg I didn’t know about. Sometimes you need a bit of a push to look outside yourself, at what people around you are experiencing.”

In Canada, “we teach history from one perspective,” adds Kevin Settee, vice-president of the UWSA. “That missing information is continuing to have a negative effect on Indigenous people.” Indeed, there’s a lot the country’s creation stories currently miss: the withholding of food from starving people to force them to submit to treaties in the 1870s; the virtual imprisonment of Indigenous people under the pass system. Not all North-West Mounted Police lived up to their Dudley Do-Right reputations. “Right now, all you’ll hear is that we killed the nice Pilgrims,” says Lakehead vice-provost Cynthia Wesley-Esquimaux, a member of the Chippewa of Georgina Island First Nation, on Lake Simcoe. “We’re simply asking students to consider other stories too.”

She believes the Indigenous credit requirement will eventually spread to other campuses. In June, after the Truth and Reconciliation Commission concluded its work, University of Manitoba president David Barnard, the chairman of Universities Canada, published a powerful editorial in the Ottawa Citizen calling on universities to foster change at their “core.” “Where there is racism,” Barnard wrote, “we must challenge it.”

Both Winnipeg and Lakehead have had their decision questioned. Lakehead’s engineering students didn’t understand why they needed to learn about Indigenous culture until Wesley-Esquimaux explained that “those are the very doors you’ll be knocking on when you’re putting in new mining infrastructure in the North.” Indeed, there are 49 First Nations just north of Lakehead, with a population of 50,000. The school’s graduates will require an understanding of treaties and the changing legal climate.

Some business students in Winnipeg also expressed concern. For Settee, who is Anishinaabe and Cree and a member of the Fisher River Cree Nation north of Winnipeg, it’s important that business students, who might one day be charged with hiring, “know that we’re not lazy, that we do want to work, that they understand that these are stereotypes, and they continue to do a lot of damage.”

“We tend to get stuck on how this will impact non-Indigenous people,” says Wesley-Esquimaux. “But consider how important this is to the Indigenous community. For the first time, they’re hearing: Your history is as important as ours.”