McMaster University is converting heat from pizza ovens to electricity 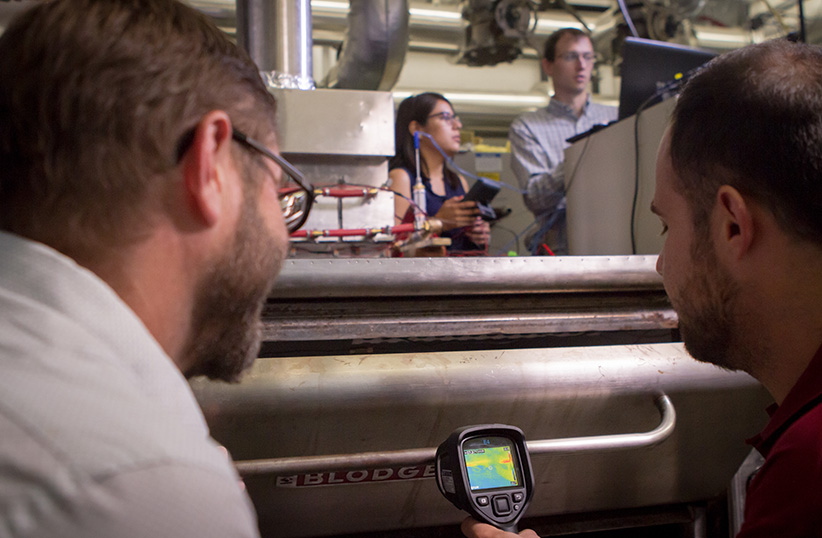 Aha! moment: Finally getting lights powered by a heat-capturing unit to switch on

They say that if you can’t stand the heat, get out of the kitchen. But what if you could capture that heat and put it to use? That’s what engineering students and faculty advisers at McMaster University are trying to do with the Pizza Oven Waste Energy Recovery (POWER) project.

The project uses a PVR-sized thermoelectric generator that, when placed on an oven’s chimney, captures heat and converts it to electricity. That stored energy can then power lights and computers, and heat hot water and the store. If a restaurant installed just one, annual savings would be about $6,000—not to mention the environmental benefits.

Jim Cotton, associate director of the Institute of Energy Studies, and his team came up with the idea when they noticed no one was working in the efficiency and equipment market. Given that 10 per cent of the natural gas used to heat a pizza oven actually cooks the pies, they partnered with mega-chain Pizza Pizza to look at the problem.

A typical pizza oven needs a constant supply of natural gas: it is kept at 260° C during operating hours and 150° C overnight so they can get it to cooking temperature each morning. Pizza Pizza stores have up to seven ovens. Multiply that by 400 locations where the company hopes to deploy the thermoelectric generators, and there will be significant savings. A single unit could collect enough waste heat in a year to heat eight homes.

Taking on a capstone project is a requirement for fourth-year engineering students at McMaster, and more than 50 undergraduate and graduate students have worked on POWER since 2012. Its potential is huge, because, even with home stoves, “we waste more heat than we use,” says Cotton.

Rafat Hirmiz, a Ph.D. candidate working on the project, says putting ideas into practice is vital to learning. “It’s usually the first time [students] have seen something go from an idea on paper to actually working.” When Hirmiz and the team finally got the contraption to switch some lights on at 2 a.m. one night in the lab, it was a big leap in the project’s development. “[The impact] is actually huge,” he says.