Meet the intern who sailed from Gibraltar to Canada

Filing papers and getting coffee? Not quite. Liam Burke spent an internship at sea 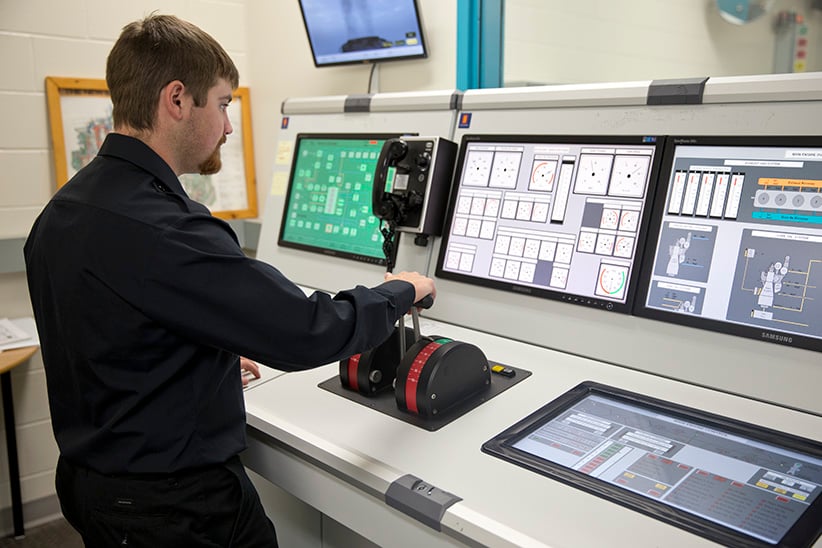 Not all internships involve filing papers and getting coffee in a downtown office. In fact, Liam Burke’s internship was about as far from that as you can get.

The 19-year-old marine engineering technology student spent his work term sailing from Gibraltar to Canada. It was the first time the Nova Scotia native had left North America.

“It was the best experience I’d had in a long time,” he says. “I liked the hands-on work and being on the water. Plus, I got to see one side of the world, and I hope I’ll get to see a lot more [of it] in the future.”

Burke, who is in his second year of a diploma at Nova Scotia Community College (NSCC), is hoping the experience will lead to a job in the industry, helping to run and maintain the engine and other systems on a ship.

His chances are good: Only the Coast Guard and five schools in Canada offer the training, from the British Columbia Institute of Technology to NSCC’s diploma on the opposite coast. And, thanks to a worldwide shortage of marine engineers, many students from these programs graduate with multiple job offers.

According to Drewry Maritime Research from this June, the shortfall is shrinking, but there is still a shortage of 15,000 officers that should last until 2019.

Some offers are from corporations such as the shipping company Maersk, or cruise lines; the most lucrative are from the offshore industry, with companies such as Shell and BP, where salaries can start as high as $100,000.

That’s not bad for courses as short as NSCC’s new 2.5-year diploma, which includes 180 days at sea, and lets graduates become fourth-class marine engineers, after passing the Transport Canada exam. Those up for more schooling—and a few more years on dry land—can roll that into a four-year diploma, and graduate directly into a second-class rank.

That’s what 21-year-old Raven Boudreau is working on. The native of Yarmouth, N.S., sees the job as a way to share her father’s passion. “I grew up in a fishing community, and my father fixes fishing boats,” she says. “So I’ve always wanted to be around the water and the boats.”

Boudreau is hoping to work on a larger vessel when she graduates. “It’s nice to get to see so many different ports, and I like the ocean.”

Spending much of your life at sea is one of the best parts of the job—and also one of the most challenging, says Vivek Saxena, the academic chair of the NSCC Nautical Institute.

“It takes you away from your house for four to six weeks at a stretch,” he says. And there’s a payoff: During that time, engineers travel to new places. “You need to be a bit of an adventurous person, someone who wants to see the world.”

Transport Canada regulates training in all the Canadian institutions, keeping class sizes small by limiting the instructor-to-student ratio to 1:24, for example, as well as requiring that students are trained on engine-room simulators that recreate common problems. It also runs the competency exams that graduates must pass before going on the waters. Over the past five years, 2,764 people have earned certificates of competency from the institution, credentials that are recognized both here and internationally.

Engineers work in the engine room on a ship, making sure the motors and related machinery are well maintained, and troubleshooting repairs while out at sea. They also maintain the ship’s electrical systems, pumps, cooling and water treatment. That’s why it’s one of the few careers that melds the intellectual—physics and math are the entry requirements—with the practical; the ability to work well with your hands is equally important.

Being able to troubleshoot and stay calm doesn’t hurt, either. “In my job now, I’m in an office, and I know what’s going to happen the next day,” says Saxena. “When I was out at sea, every day I was dealing with different challenges. Every day was new.”