How Canadian colleges have carved out a niche in applied research, allowing students to work on real-life projects with industry and community partners 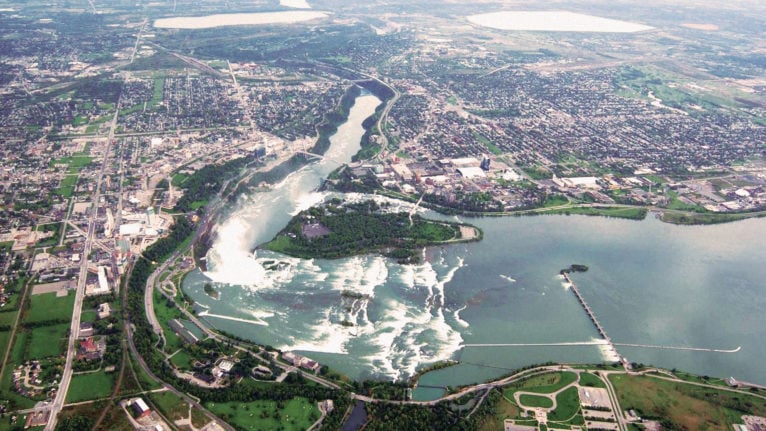 Flying a drone over the Niagara River is no easy task. Not only do the pilot and ground control team have to account for fluctuating wind conditions while hovering over one of the most treacherous bodies of water in North America, there are also political considerations. If the aircraft were to deviate from its flight path, even slightly, it could veer into American airspace, creating an international incident.

Against this high-stakes backdrop, faculty and students from Hamilton, Ont.’s Mohawk College prepared for takeoff one brisk afternoon last winter. Their mission was to collect data 60 m above the International Control Dam, which controls the flow of water on the Niagara River. This wasn’t simply a school assignment. The data the drone collected would be rendered by students and sent to Ontario Power Generation (OPG).

Across the province, OPG operates 241 control dams on 24 river systems. Over time, the dams shift because there are huge forces pushing against them—they all need to be inspected periodically. OPG approached Mohawk for this project because the school has a state-of-the-art light detection and ranging (LiDAR) scanner and high-resolution camera. Due to the dam’s location, using drone-mounted remote sensing technology such as LiDAR provides access that would be nearly impossible using traditional survey technology. As the drone flies over the dam, the LiDAR scanner sends out laser pulses that beam data off physical surfaces that can then be used, along with high-resolution photographs, to create a virtual picture of the physical environment. By working with Mohawk, OPG gets to test-drive cutting-edge technology, but, more importantly, it receives actionable information. The high-resolution measurements captured during the flight and processed afterwards provide OPG with a much clearer picture of the condition of the dam.

“We can observe surface condition [and] water contact lines,” says Tim Trebilcock, a technical lead within OPG’s Remotely Piloted Aircraft Systems group. “We look at the rate of erosion and other determinants in building statistical models. It goes into a huge pot of data that helps us [manage] our assets more efficiently and accurately over time.”

During the course of that 15-minute flight last winter, Mohawk’s LiDAR scanner was continuously sending information back to computers on the ground. While a faculty member licensed by Transport Canada flew the drone, students provided ground support. Kevin Robinson, a third-year civil engineering student, helped set up the control tower and GPS that allowed Mohawk to collect the data. Robinson also served as the team’s extra set of eyes. Due to Transport Canada regulations, drones must be within sight at all times without the use of a visual aid such as binoculars, for example.
James Kretz, a first-year engineering student at Mohawk, was part of the team that stitched together thousands of data points collected by the drone. It was his job to make sense of the information. “Since the flight was done mostly over water, I had to calibrate the flight lines and do a lot of manual editing of the dam’s orthomosaic image, which is a bird’s-eye view photo,” he says. “At the end you have a point cloud, which visually represents the space pretty much exactly how it is.”

The Mohawk drone flight and subsequent data processing is one of many examples of the kind of applied research projects that Canadian colleges are uniquely positioned to undertake. Unlike discovery-based and theoretical research, which is commonly undertaken at universities, applied research combines study and action.

I know both worlds quite well. I graduated from McMaster University in Hamilton in 2015 with a Ph.D. in history and, after working at a think tank for a couple of years, I joined the applied research department at Cambrian College in Sudbury, Ont., where I am now the director. In my time in this space, I have seen first-hand how Canadian colleges have carved out a niche in the education landscape by taking the latest research and technology and applying it to help industry or community partners solve practical challenges. To carry out these industry-academic partnerships, colleges apply for funding from federal agencies such as the Natural Sciences and Engineering Research Council of Canada, as well as provincial funders. As part of these projects, students receive a paid experiential learning opportunity and get the chance to work with a prospective employer in their respective field.

Across the country, many colleges have taken a targeted approach to applied research by working with sectors of both economic and regional importance. For example, Nova Scotia Community College (NSCC) has partnered with Biome Renewables, a design and engineering firm, and Renishaw, a global leader in additive manufacturing, to build two versions of an underwater turbine prototype. NSCC used the Renishaw metal 3D printer to build the prototypes and applied Biome Renewables’ innovative wind turbine technology to the tidal sector. (The prototypes are now undergoing testing in Ireland.) In Sudbury, a global mining hub, Cambrian has worked with Clickmox Solutions Inc. to help develop a customized capsule that houses a LiDAR unit, for a new technology that will allow mining companies to explore uncharted cavities underground.

One of the critiques of applied research is that it often places a premium on commercialization. For the most part, the government funding that Canadian colleges can access to execute projects focuses on new product developments or making operations more efficient. Non-profit and public sector organizations, such as museums or municipalities, tend to miss out on applied research opportunities because they don’t have access to industry-academic funding envelopes. Richard Borger, a professor in the building and construction sciences program at Mohawk and the pilot on the flight for the OPG project, hopes to see this change in the future. “[Colleges are] missing a big piece of the pie when [funding for applied research] is not available to the public sector,” he says.

But the benefits to individual students are undisputed. Participating in applied research projects helps develop independent research and problem-solving skills. “They learn to work in teams on highly technical projects, drawing from everyone’s areas of specialization, and they gain experience managing external client expectations and relationships—all while dealing with the pressures of work and academic deadlines,” says Borger. “It makes them future-ready. Working on these projects, they develop skill sets that they can transfer into any industry.” Borger believes that the new technologies students are exposed to and learn through applied research projects make them highly sought-after in industry. “We’re starting to see industry recognize that these are skills they want to bring in-house, and the students get hired almost immediately,” he says.

That’s exactly what happened to Kretz. Although he still has two years left in his program at Mohawk, he was hired by an engineering firm over the summer because of his experience on the International Control Dam project. “The skills I learned from working with point cloud data sets [were] one of the main reasons I was hired,” Kretz explains. “School helps you build those fundamental skills, but in applied research, you’re learning what the industry is moving toward.” And when he returns to school in the fall, he has a distinct advantage. “Some of the projects I have taken part in end up being used in the classroom for teaching,” he said. “While most students are just learning about a new type of skill or data set, I was the one who actually captured it and made that data set.”
While Robinson had a different experience on the dam project, working chiefly on ground control, he has worked on other applied research projects that have helped him in his studies. “I got to scan structures before I was even learning about what those structures were,” he said. “I was able to apply it to other courses. It kind of helps accelerate your learning process and mixes quite well with the curriculum.”

This article appears in print in the Maclean’s 2020 Canadian Colleges Guidebook with the headline, “Not just another school assignment.” Order a copy of the issue here. Subscribe to the monthly print magazine here.