Multiple choice, multiple students: The merits of the two-stage test

Multiple-choice exams done individually, then by teams, are taking the prof out of the equation 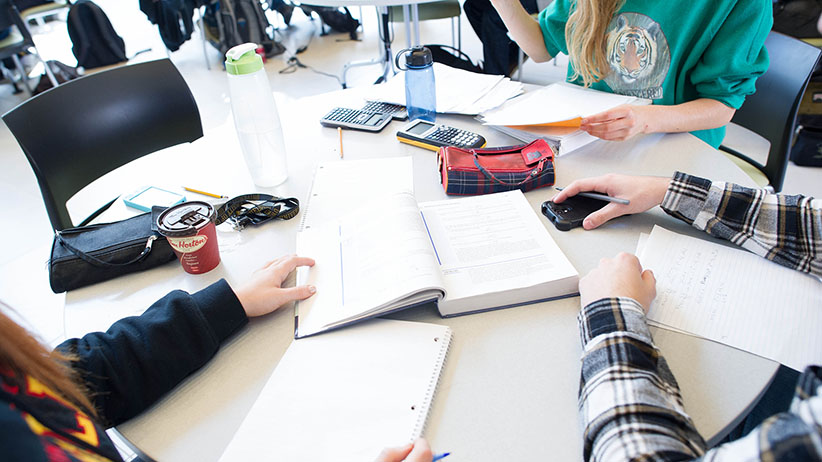 In Brett Gilley’s classroom, it’s not uncommon for him to see students giving each other high-fives in the middle of a mid-term. He might even hear them utter a few curse words, too.

Immediately after each student completes a 30-question, multiple-choice exam, Gilley makes all his students take the exact same test again, only, this time, in groups of four. The quiet of a room filled with hundreds of students suddenly becomes loud and boisterous. But does it help prepare students for life after university? “Nobody goes into a room and writes a multiple-choice test for their job,” Gilley says. “People sit down in groups and discuss things to get points across.”

An instructor in the department of earth, ocean and atmospheric sciences at the University of British Columbia, Gilley first tried this two-stage test approach in 2007 with class quizzes. “They tend to run out into the hallway and turn to their friends and say, ‘What did you get for question number six?’ and have a discussion about it,” he says. “We’re just formalizing that process.”

A recent study co-authored by Gilley showed higher retention of course material when students have collaborative group tests immediately after the individual test. “It’s not just that I know the answers better,” says Danny Congleton, a first-year bachelor of arts student at UBC. “I understand the reasoning behind why certain answers are correct.”

When Stanford professor and Nobel laureate Carl Wieman first implemented two-stage exams during his tenure at UBC, he remembers seeing a quiet, young student, who rarely said a word in class. “I knew from her assignments she was pretty good,” Wieman says. “We had this very interactive classroom and we couldn’t get her involved in anything.” But when it came time for the two-stage exam, the same student suddenly became very involved. “She sprawled across tables, grabbing pencils to show how she thought this problem should be done,” Wieman says.

Faculty over the years have seen the benefits of the two-stage exam, to the extent that more than 50 classes at UBC have implemented them today, across courses in physics, chemistry, biology, math, statistics and computer science.

One drawback to the test, however, is that consensus doesn’t necessarily translate into the correct answer. As well, for some difficult questions, a group may leave without any certainty over which answer was correct.

To give students immediate corrective feedback, Michael Epstein, now retired as a psychology professor from Rider University in New Jersey, invented the Immediate Feedback Assessment Technique (IF-AT) testing system in 1997 to replace regular multiple-choice tests. Similar to a “scratch and win” lottery ticket, students scratch one multiple-choice answer, and an X underneath reveals if they have chosen correctly. If there is no X, however, students select another answer to try to receive points for partial knowledge. “It wasn’t fair that on a multiple-choice exam, students who can narrow it down to two choices before selecting and make the wrong choice are just as wrong as someone who has no idea, guesses and gets it wrong,” says Epstein. It could be four points for a correct answer on the first scratch, two points on the second try, and one point on the third try. No matter how many scratches it takes, students leave knowing what the correct answer is and how they performed on the test.

“The longer you delay the feedback, the less useful it becomes,” says Jim Sibley, a staff member at UBC’s Centre for Instructional Support and co-author of a book on team-based learning. “Can you imagine you hit a golf ball and I tell you in a week in which direction it went, and then you try to adjust your shot?”

Team-based learning combines the two-stage exam with the scratch test. “These cards are really nice at building group norms, quelling the dominator and encouraging the quieter voice,” Sibley says. If an overconfident student bullies others into picking his answer, they will see right away if he is wrong. Conversely, if the quiet student is often right, the fellow group members will learn to bring that student into the conversation.

And, to make sure no slacker shows up unprepared, the two-stage exam system can be weighted such that the individual test accounts for 85 per cent of the exam mark, whereas the remaining 15 per cent comes from the group test. In that case, everyone knows the right answer by the end of the exam, everyone has individual accountability, and the students learn from each other. “You’re not the teacher anymore,” says Sibley. “You’re the architect of a learning experience.”