Music therapy is no longer languishing on medicine's fringes

Music therapy is gaining legitimacy in the medical community, leading to more programs and jobs 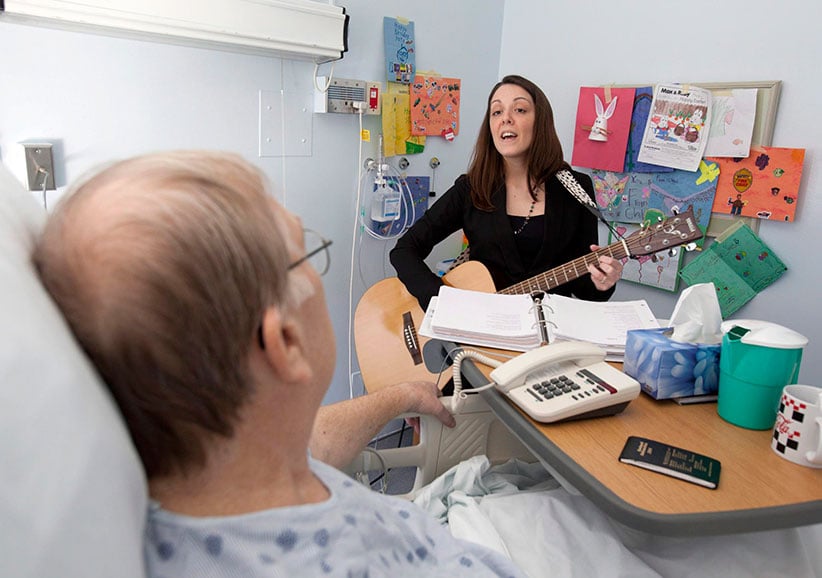 Erin Montgomery sings for Art, a patient in the palliative ward at the Victoria General Hospital, Friday April 8, 2011. Montgomery sings to several patients in the ward, lifting their spirits with music and song. (Tim Krochak/Halifax Chronicle Herald/CP)

It may seem a small number—just 21—but this year’s crop of music therapy students at Wilfrid Laurier University is the largest since the program was established at the Waterloo, Ont., institution in 1985.

According to Colin Lee, a music therapy professor and coordinator of undergraduate studies, the program has tripled in size in the past five years because the profession no longer exists on the fringes of medicine. Clinical studies have proven music is powerful medicine, and the program has reaped the benefits. “If you look at health care across the board, there are roles for music therapists everywhere,” says Lee. “Wherever there is health care, music therapy can add to the treatment.”

For music students who don’t want to perform or teach, music therapy is a welcome option. Laurier’s program requires students to take a bachelor of music first; they enter the music therapy specialization in their third year after a one-on-one interview.

Students take classes ranging from medical music therapy to the psychology of music. An on-campus clinic offers supervised clinical training so students can get hands-on practice in preparation for work at psychiatric hospitals, rehabilitative facilities and daycare centres.

The industry is regulated by the Canadian Association for Music Therapy. In order to become a member, students must complete, at minimum, an undergraduate degree in music therapy, a 1,000-hour internship and an exam—a 150-question, multiple-choice test. If they pass, they can practise in Canada and the United States, where they will earn between $35 and $115 an hour, according to the association’s Pamela Lansbergen.

“Music therapy embodies the notion that human beings are inherently musical, which is evident in the rhythms of their physiology (such as the heartbeat and respiration) and melodic intonation of the voice and breath,” Toronto music therapist SarahRose Black explained in a 2015 column.

The 29-year-old, a Ph.D. candidate at the University of Toronto in music and health, helps patients deal with anxiety, depression and even terminal illness.

In one case, Black helped a woman in her late thirties write a song before she died, also known as a “legacy piece.” As Black improvised a melody on her piano, within 20 minutes the pair had written lyrics and recorded the song on the spot. A few weeks later, the woman’s children sang it at their mother’s funeral. “Stories like this keep me engaged and inspired and completely honoured to do what I do,” says Black.

Black started her career as an intern at the Princess Margaret Cancer Centre in Toronto in 2012, where she helped develop its first music therapy program with the head psychiatrist. “People interested in pursuing this field have to figure out how they’re going to carve out a niche for themselves, whether they’re starting a program in a facility, joining a team of music therapists or starting a private practice,” she says.

Lee, the Laurier professor, encourages an entrepreneurial spirit. “Somebody will come from North Bay [Ont.], where no music therapy practices exist. But they’ll come here to do the degree and then [go back and] sell music therapy at their local hospice,” he says. “They’re the ones creating new jobs. That’s how the profession is going to grow.”