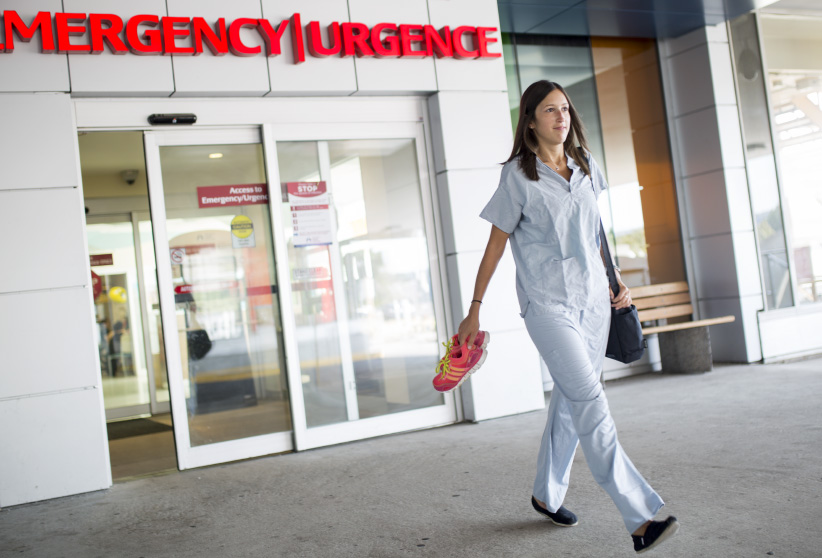 What if you’re not good enough? That’s the question Ben Fung kept asking on his first day of medical school at the University of Toronto. Fung was accepted in a year with 3,488 applicants, when the average grade point average was 3.96 on a 4.0 scale. Objectively, he was qualified. But what if all that was an illusion? “Everyone seemed so smart, so impressive and I kept asking: Do I belong here?” says the 23-year-old.

Fung’s story is common. His willingness to be open about it is rare. Most doctors don’t talk about feeling inadequate, let alone more serious problems like depression, substance abuse and suicidal thoughts.

Twenty-nine per cent of young doctors have depression or symptoms of it, according to a 2015 study in the Journal of the American Medical Association looking at 17,000 physicians worldwide. While there is no data on suicide among Canadian physicians, in the United States the best estimate is that about 400 doctors kill themselves every year. According to a 2015 survey of 1,122 medical students in the United Kingdom, conducted by the journal Student BMJ, 14 per cent of medical students considered suicide during their studies.

Young doctors across Canada are trying to change those statistics, encouraging struggling peers to seek support and building programs that make it easier for them to take care of themselves. Now a second-year student, Fung helped draft the new curriculum for the University of Toronto, rolling out this fall, which will include several weeks of resiliency training.

The curriculum is designed to combat the stresses of medical school, where top students are pitted against each other. Students will be taught to identify warning signs such as loss of appetite, no motivation to exercise, and negative thoughts. Ultimately, U of T hopes to encourage people struggling with common experiences like failing a test or feeling depressed to seek help instead of repressing it. “There’s a stigma in medicine about being vulnerable and about being weak,” says Fung. The Resident Doctors of Canada (RDoC), a professional association representing 9,000 medical residents—those fresh out of medical school who are supervised by senior doctors—has a similar resiliency training program.

Residents have particularly high rates of substance abuse, depression and suicide. They are often required to work more than 24 hours straight, and face enormous competition for elite jobs—not to mention the stress of making life-or-death decisions fresh out of medical school.

Tara Riddell, a first-year resident at McMaster University, started a blog for physicians in an attempt to encourage doctors to talk about their problems and highlight programs designed to improve mental health. She argues the resiliency training programs are important, but they can’t address the bigger issues. “We’re not really tackling the root of the problem. There’s a culture in medicine of working 80-, 90-, 100-hour weeks, and never taking time off.”

Riddell points to some positive signs. At McMaster, residents get one day off a week. Overall, though, she says schools are resistant to change and that when it does happen, it tends to come from outside. For example, Quebec implemented 16-hour maximums for shifts in 2012 after losing a four-year legal fight with a young doctor who argued that long hours lead to medical errors and endanger patients’ lives.

Young doctors are similarly at the forefront of resiliency training. Christina Nowik, a fifth-year resident at Queen’s University and former president of the RDoC, is travelling the country to deliver training she hopes will help residents take better care of themselves, and ultimately better care of their patients. She helped design workshops that Dalhousie University and the University of Calgary put on this summer based on a program the Department of National Defence has been using for about a decade to help soldiers deal with extreme situations such as combat and death.

Quebec coroner Jean Brochu investigated the suicide of 27-year-old medical resident Émilie Marchand while she was a student at the Université de Montréal. His 2015 report said the school did not do enough to keep Marchand safe. One year later, “the main problem with medical schools is that they are so afraid of being evaluated and judged that they will do everything they can to hide their problems” says Brochu.

The RDoC wants resilience training to be mandatory for all students, not just offered as workshops for some medical residents, but Geneviève Moineau, president of the Association of Faculties of Medicine of Canada, says it is unnecessary because medical schools already do a lot to help students battling depression and suicidal thoughts. Resiliency, she adds, is just the latest word to describe wellness. “The concept of wellness has been very important for those us who are responsible for the students and residents within our faculties of medicine.” When asked for a specific program she would like expanded to improve student mental health, something other than resiliency training, Moineau was unable to name one.

Brochu says part of the problem is a lack of basic data, and Nowik wants someone to start counting physician suicides —which she says everyone knows is a problem, but doesn’t talk about. “When I was [training people] in Dalhousie, I asked if people knew a doctor who had committed suicide and half the room raised their hands,” she says.