Earning financial support isn’t all based on grades. It’s about knowing your skills, research, and starting early. 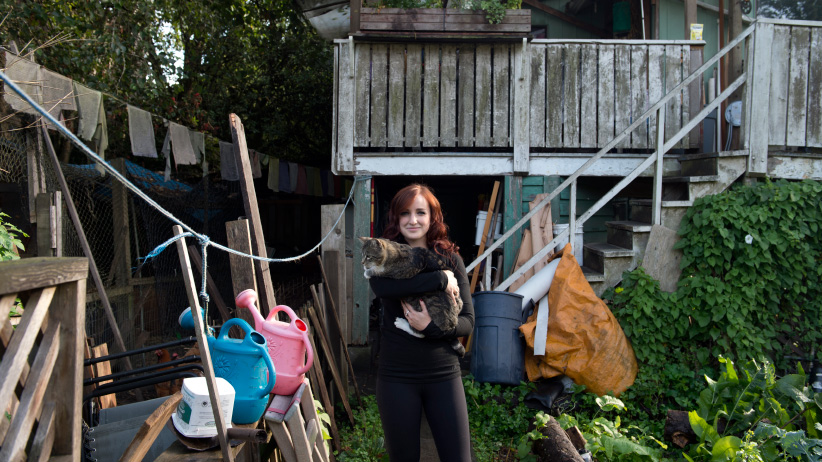 Stephanie Kirk, a third year student studying political science and psychology, and her cat Mr. Kitty at their home in Vancouver, B.C. Kirk is the recipient of the $80,000 UBC Centennial Leaders Award entrance scholarship. She hopes to specialize in studying trauma. (Photo by Taehoon Kim)

As a home-schooled kid, Stephanie Kirk had never set foot inside a classroom until she attended Selkirk College, a post-secondary school in Castlegar, B.C. She excelled during her two years there, applied for a transfer to the University of British Columbia—and then dread set in.

Kirk recalls being in a coffee shop, “ordering the smallest, cheapest thing on the menu, starting to get desperate about whether I could actually even afford to continue to go to school.” That’s when she got the call: UBC had awarded Kirk its full-ride, $80,000 Centennial Scholarship for exceptional students with demonstrable ﬁnancial need.

“They basically said, ‘You’re taken care of, everything is okay.’ Oh my God, it was amazing,” says Kirk, who is pursuing a double major in psychology and political science at UBC’s Vancouver campus. The award will cover tuition and living costs. (Kirk and her cat have moved into an affordable room she found on Craigslist: “It’s an urban homestead. It’s really cool. They have chickens and this massive garden right in the middle of this really swanky part of town near campus.”)

Joining Kirk in the scholars’ circle at UBC is Miranda Andersen, whose passion for environmental protection started when she was a nine-year-old helping out at a salmon hatchery near Burnaby, B.C. Andersen was the top biology student at Burnaby Mountain Secondary School, but it wasn’t just the marks that won her an $80,000 Schulich Leader Scholarship for students going into the sciences. The award also recognized Andersen’s accomplishments as a national-level competitive swimmer and the contribution to the community she made as the creator of ﬁlms to educate children about environmental issues.

Across the country, Benson Law made it to the semiﬁnal round for the Loran Scholarship Foundation’s prestigious annual $100,000 prize for elite Canadian high school graduates who demonstrate “character, service and the promise of leadership.” While the big one got away, Law still won enough smaller scholarships and bursaries to pay for most of his ﬁrst-year tuition and residence costs at Western University in London, Ont., where he is enrolled in health science.

The awards won by Kirk, Andersen and Law demonstrate that earning a scholarship isn’t just about sky-high marks. While high grades are crucial for many awards, others look beyond the transcripts for qualities that encompass leadership, special talents and community service. Some are offered directly by the universities; others by external foundations, corporations and benefactors. Successful recipients and university ofﬁcials agree: ﬁnding a scholarship is often a matter of starting early and knowing where to look.

The more conventional academic entrance scholarships offered by universities are typically based on marks at the time of admission, says Doug Gardhouse, undergraduate awards manager at Concordia University in Montreal.

Some universities have the resources to hand scholarships to all students who have attained a certain grade point average. Others, like the entrance scholarships at Concordia, are awarded to those with the highest marks, meaning the threshhold can shift based on the applicant pool. Depending on the faculty, a student could come in with a 95 per cent average and still be outranked by the competition.

Students should check the various university websites before assuming they will automatically qualify for an academic scholarship, as each institution takes its own approach, Gardhouse says.

The University of Toronto, for example, has an interactive online “scholarship sorter” that students can scroll through by entering a few keywords. There are more than 3,600 undergraduate admission scholarships, and more than 5,000 scholarships for students entering second, third and fourth year. Some are automatically granted on the basis of students’ averages, while others require an application.

(To take one example, the U of T Scarborough campus offers the following information on entrance awards: those with an admission average of 95 per cent or above automatically qualify for a four-year scholarship of $3,000 a year—with an annual renewal contingent on maintaining a 3.7 grade point average. Those coming in with marks averaging 92 per cent to 94.9 per cent are awarded $2,000. There’s $1,500 for averages between 90 per cent and 91.9 per cent, and $1,000 for those coming in with marks between 88 per cent and 89.9 per cent.) 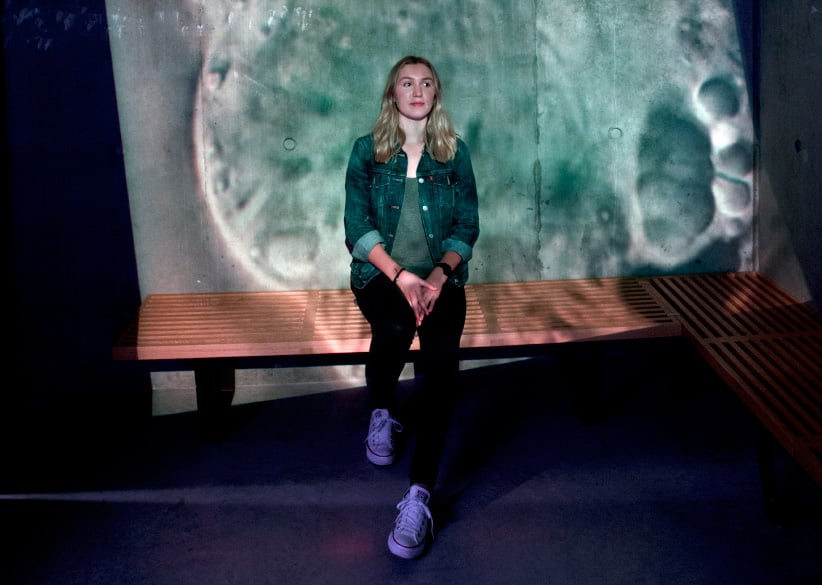 Miranda Andersen, a first year student at the University of British Columbia, at the Beaty Biodiversity Museum in Vancouver, B.C. Andersen was the recipient of a Schulich Leader Scholarship, an $80,000 award for students studying science, technology or mathematics. (Photo by Taehoon Kim)

For her part, Andersen was savvy about scholarships long before most of her peers. She was in Grade 9 when her mother heard a presentation by Vancouver-based scholarship consultant Brittany Palmer, who is regularly invited to speak to secondary school parent councils and community organizations in B.C.

Even then, Andersen was an accomplished student and athlete. Pointers from Palmer, founder of Unlock Your Future, helped Andersen document those accomplishments and zero in on promising scholarship prospects. In addition, an economics teacher who served as scholarship coordinator at Andersen’s secondary school helped by ﬂagging opportunities that students should apply for.

“I think a lot of kids start preparing too late. In Grade 12, they’ll start applying for scholarships and realize there are 10 spots on the form for community service, or leadership activities or volunteer activities, and they only have one or two. They start to realize that, realistically, they should have [done] a lot more than [that] if they want a shot at a scholarship,” Andersen says.

Ideally, students should be thinking in Grade 10 about what they might want to do for a living, what further schooling they’ll need, and how they will pay for that schooling, says Tracey Parish, a secondary-school principal with the Toronto District Catholic School Board. Grade 10 is not too soon to start sussing out scholarship opportunities, says Parish, who served as a scholarship coach to her students before being promoted from the teaching ranks.

Still, students at that age often need help recognizing their own strengths and talents—the value of their participation in the robotics club, the contribution they are making as a volunteer. The Ontario curriculum requires that students perform 40 hours of volunteer work as a condition of secondary school graduation. Some of Parish’s students have logged thousands of volunteer hours. “There’s obviously your passion,” she tells them. “How are you talking about it?”

“Not every scholarship requires that you be a 90-per-cent-average kid,” she says. As a scholarship coach, Parish would have students reﬂect on what made them special: “How do you talk about your passions, how do you talk about what you have learned and how you are giving back, and how does that ﬁt with the scholarships we are looking at for your skill set?”

Kirk simply checked the UBC website to see if there might be any ﬁnancial assistance available because there were no family funds to help her out. “I just did an extra essay while I was sending my application for the scholarship and entrance awards. I never expected to get anything, submitted it, and forgot about it until I got the call,” Kirk says.

She remembers the questions on the Centennial Scholarship as being somewhat vague, so she outlined her ﬁnancial situation and wrote about what she hoped to do with her life. “I am really interested in trauma and operational stress, so I really think my end goal is to work with military and ﬁrst-responder populations who have experienced traumatic events. Maybe refugees as well. That’s my dream,” Kirk says. “There are people really close to me who have post-traumatic stress disorder, and I have been able to see how good mental health care can make a huge difference.”

When students apply for admission to UBC, they are asked a series of questions designed to give the university a better proﬁle of the people behind the marks, says Darran Fernandez, associate registrar and director of student support: Where are they from, what they have done, what have they learned along the way, and where do they do they hope to go with their education?

“We want to know about their leadership experience, their ability to persevere, to be resilient, all those kinds of things.”

Depending on how students answer those questions, they could be deemed worthy of major entrance scholarships worth anywhere from $5,000 to $60,000, Fernandez says.

“It can be quite the opportunity for a student who has done well academically and has been really engaged in their community.”

In Vancouver, Palmer advises students on how to build portfolios documenting their activities and accomplishments so they have compelling stories to tell. She also conducts essay-writing workshops to help students ﬁnd those voices, and offers pointers on how to search for scholarships close to home and online. Most students can ﬁnd an opportunity that’s suited to them. Scholarships aren’t just for the “image in our mind of what a scholarship candidate is—a child prodigy or someone who created an international organization or saved a small country,” Palmer says.

Many scholarships are based on factors other than marks. Employers often grant awards to the children and grandchildren of employees, while organizations such as the Girl Guides of Canada, Lions Club, Rotary Club, and others like to support their own. There are scholarships for children of military families. The Black Business and Professional Association offers scholarships, as do other cultural organizations. Local sports teams sometimes offer money to supplement any scholarships that student athletes might receive to play varsity sports at university.

Law used the Yconic.com site to ﬁnd his scholarships. The website has more than 20,000 scholarships posted in any given year, including some major awards—UBC listed its Centennial Scholarship in an effort to reach eligible candidates from low- to middle-income families across Canada. Universities also encourage students to look for external sources of money through the scholarshipscanada.com site. Law won a $2,000 Students Making an Impact Award sponsored by insurance brokerage Benson Kearley IFG. (While in high school, he provided a home maintenance service for low-income families, volunteered as a Cantonese-English interpreter at Toronto’s Mount Sinai Hospital, and partnered with a Chinese media outlet for a hospital fund-raising campaign.) He won another $2,500 scholarship, sponsored by Home Depot, for families of employees. “The best thing is that it’s in U.S. dollars. I went to the ﬁnancial ofﬁce to cash it in . . . and got a really great exchange rate.” As the academic year got under way, Law was waiting to hear about some other scholarships designated for students of Chinese heritage.

The most tenuous of connections can, in the end, help pay for a post-secondary education. Palmer’s brother Bo, who ended up playing for the Canadian Football League, cobbled together a number of scholarships to pay his way through Simon Fraser University—“including a $1,500 scholarship through our grandfather’s insurance company,” she says. “He was eligible simply because our grandfather had a policy with them.”